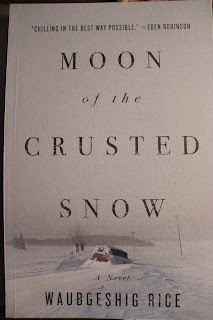 Snow was falling in Northport on Thursday afternoon, sometimes blowing horizontally down Waukazoo Street, with the temperature hovering right around the freezing mark when one of my customers arrived to pick up her special order. The book she had ordered sounded so intriguing that I’d ordered a second copy, and later that afternoon I began reading.

The central character, Evan Whitesky, up in northern Ontario, is on the trail of a moose.

He had been out since early morning and had been tracking this particular bull since around noon. The fall hunt was drawing to a close, and he still wanted to put more food away. Food from the South was expensive and never so good, or as satisfying, as the meat he could bring in himself.

Evan takes pride in providing for his partner and their two young children. An accomplished hunter and fisherman, he has put away enough protein for the winter to have plenty to share with his parents, and when Evan joins his father in cleaning a hide, the two men envision future moccasins. The Whitesky family is better prepared than some others on the reserve for life without hydro power.

A missing satellite signal brings the first hardship: no morning television for the children and no Internet signal for their elders. Electric power lasts a little longer before it too goes out, but people on the remote, isolated reserve have experienced power outages before and know how to cope until the electricity comes back on. They remind each other that the old ones in times past lived without electric lights and television. When there is no signal for their cell phones, some still have landlines — until these, too, fall dead.

It is the beginning of winter, so the Council needs to plan for the future as well as for the immediate situation. Without regular deliveries of fuel and food from the South, they have enough diesel to run a generator until late February, if everyone cooperates in conserving energy, and with foresight they have stockpiled a cache of canned foods for just this sort of emergency, but surviving the immediate emergency is only the first step, and the future is unclear.

Three more cold nights passed. The generator power would only last so long. The chief called another emergency meeting at the band office…. There was still no communication with anyone in the outside world.

The world of the novel is circumscribed from the outset. Its remote backstory is one of displacement — from the Great Lakes region to the south, the people had been forced to the harsher north — the nearer backstory one of dependence on regular deliveries of groceries and fuel. But that was then, and this is now, and the demands of now throw the people back on traditional ways of life and traditional values that some have been practicing all along and others need to learn.

Evan has been going to school, informally, with his elders: learning the people’s language, he and Nicole are teaching it to their children, and, somewhat awkwardly, using the native words he knows interspersed with English, he speaks traditional prayers on the appropriate occasions. His parents’ knowledge of old ways is augmented by stories and lessons given him by the band’s oldest member, a woman in her late eighties. He hunts and shares with those in need, and he is learning to pray.

Aileen brought the flickering orange light under the carefully piled sage in the shell, and the medicine caught fire. She let it burn for a few seconds before blowing it out. Thick grey smoke billowed from the shell….

One-way “contact” with the outside world comes only three times in the novel, in quietly escalating pitch. First, a homecoming: Two young members of the band arrive on snowmobiles, having fled the chaos of the town below, which is also without power or grid infrastructure and where people are panicking and growing violent. Next, an intruder: A large, dangerous-looking white man, Justin Scott, has followed the trail of the returning young men and requests asylum, promising to pull his weight on the hunt. Finally, a while later, four more white refugees turn up and are taken in, nominally by the band, more immediately by Scott. What will the presence of these outsiders, especially the frightening and mysterious Scott, mean in this tight-knit community?

Words and phrases of Anishinaabemowin are a natural fit in Rice’s characters’ speech and are generally translated immediately, so a reader unfamiliar with the language can understand and perhaps learn a little along the way. Dreams are handled naturally, as well, either told by one dreamer to another character or presented without transition but also without confusion. When the legendary windigo enters the story, it does so naturally and quietly at first, without undue drama and literary special effects, so that we are gradually prepared for its full-blown presence.

Waubgeshig Rice’s Moon of the Crusted Snow, like Station Eleven, by Emily St. John Mandel, imagines a world suddenly bereft of electricity, electronic and digital devices, and energy systems we take for granted in our daily lives, but the imagined worlds of the two novels are very different. In the Mandel novel, we roam cities and countryside with groups of wandering Shakespearean players, a “family” brought together by interest and necessity rather than inheritance, and in the end the world as we know it is restored. The people in Rice’s world, many of them related to each other by blood, remain in place. We follow their lives in that place through the first hard winter and leave them in the spring following their second winter, the latter — and the longer-term future — left to our imaginations.

Both novels, you might say, are stories of post-apocalyptic survival, but Rice’s character Aileen dismisses the apocalyptic notion. She has heard of the notion from young people but puts no credence in it.

“Yes, apocalypse! What a silly word. I can tell you there’s no word like that in Ojibwe. Well, I never heard a word like that from my elders, anyway.

“The world isn’t ending,” she went on. “Our world isn’t ending. It already ended. It ended when the Zhaagnaash came into our original home down south on that bay and took it from us. That was our world. When the Zhaagnaash cut down all the trees and fished all the fish and forced us out of there, that’s when our world ended. They made us come all the way up here. This is not our homeland! But we had to adapt and luckily we already knew how to hunt and live on the land. We learned to live here.”

We’ve always survived, and we always will, Aileen tells Evan.

An Indigenous People’s History of the United States presents the past of the North American continent from a perspective not taught in schools with curricula set in place by whites, and Moon of the Crusted Snow presents a possible future from a non-white point of view — one possible non-white point of view, of course. That Rice’s compelling story is told in beautiful language with sympathetic characters in a setting not difficult to imagine as the first real snow blows into northern Michigan seared it into my brain, and I recommend it for your winter reading, wherever you live and whatever your ethnic background or connection to the virtual world.

Our reading world is enriched as more voices come to be heard in fiction from different cultural, ethnic, and historical perspectives. 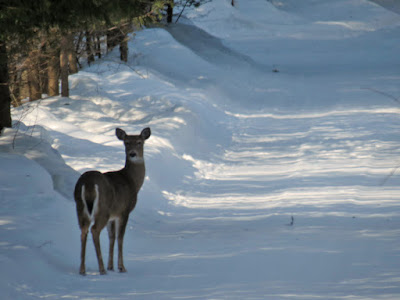