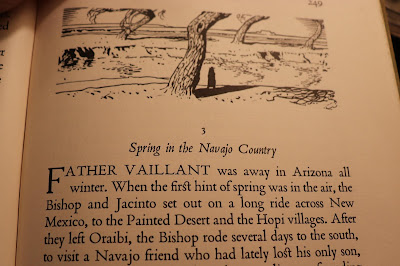 Never before have I fallen in love with a font, or even thought of so doing, but now that previously unconsidered possibility has become reality. I write not of the font I use to compose these sentences, Bookman Old Style, although I appreciate it and am glad to have fallen upon it after one reader years ago complained gently of another I had been experimenting with using. No, the object of my new but deep regard can be seen in the photograph at the top of this post. The name of the type is Poliphilus. I will quote from the note on the type at the end of the book:

Poliphilus had its origin in the singularly beautiful roman type cut by Francesco da Bologna for the Hypnerotomachia Poliphili, issued in 1499 by Aldus Manutius (1450-1515).

Who deserved the greater share of credit for the invention of italic type, Aldus (the printer) or Francesco (the typecutter)? And who was Francesco, anyway? And does the name italic derive from — Italy, its home ground? If these questions intrigue you, let them guide your researches. For now, and for myself, I prefer to remain in the company of these beautiful pages of the illustrated edition (my copy a later printing of the 1927 edition) of Willa Cather’s Death Comes for the Archbishop.

The type I am admiring is large and bold and clear. The serifs (and I love a serif) are minimal but not, thank heaven, omitted; letters are uncrowded, words and sentences easily read. At the same time, certain elegances of style make themselves noticed: the 'st' diphthong gracefully conjoined, for example, and the hyphen, rather than a dull horizontal, tipped obliquely upward in the direction of the reader’s progress. 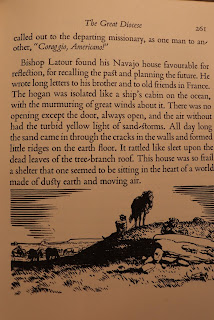 Nor does the beauty end with the font. Every page is visually delightful, honoring the author’s work. Harold Von Schmidt, a California-born painter of Western scenes who was in 1968 awarded the first gold medal given by the National Cowboy Hall of Fame, spent two years on the illustrations for this special edition of Cather’s novel. They were unlike his own more characteristic work (realistic illustrations of cowboys and horses, a world he knew firsthand), but the quiet dignity and peacefulness of the images on these pages are such that the story could not have been better served by any other style. 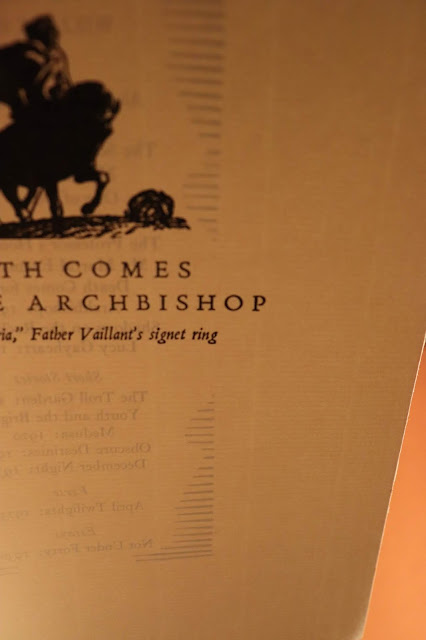 And the physical pages themselves! Look closely at the quality of the paper — at least, as much as you can detect in a photographic image presented to you on a lighted screen. Can you see the watermark? At the end of the note on type we find — 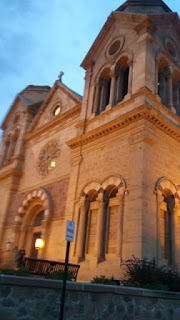 Ah, well, and of course there is the story itself, the novel some critics have said is not a novel at all (a criticism leveled also at Sarah One Jewett’s Country of the Pointed Firs). The main character, the fictional Jean Marie Latour, who came from France as a missionary in the Great Lakes region in the mid-nineteenth century, is based on the historical personage of Father Lamy, who with his fellow seminarian Father Macheboeuf spent years in New Mexico. The latter goes by the name of Valiant in the novel. The cathedral  Archbishop Lamy dreamed of building in Santa Fe stands there now, its golden hue fulfilling the fictional French padre’s dream for his flock.

As was true in My Antonia, the author interrupts the main character’s story with stories of other minor characters, many of these interruptions self-contained and not necessarily adding to anything like a plot — but then, aren’t our lives like that? We remember knowing someone briefly and recalling a story that pinned that person in memory, and that story, unconnected to the ongoing narrative of our life, nevertheless holds its place. As Father Latour, now the retired archbishop, finally lies dying “of having lived,” he relives episodes of his life that stand out as if still present and ongoing.

It is true, as the critics say, that Latour’s character does not “develop,” in the sense of changing over time. He is more or less himself from beginning to end. At a certain point, doubts of life’s meaning darken his way for a while, but basically he remains the man we meet in the beginning of the novel, and the same is true of his life-long friend, Father Vaillant. The two men are bound by memories of their youth and their homeland, as well as years of work together, but a time of parting finally arrives when Father Vaillant is called north to the rude Gold Rush settlement, and he goes eagerly.

Yes, [Latour] reflected, as he went quietly to his own room, there was a great difference in their natures. Wherever he [Father Vaillant] went, he soon made friends that took the place of country and family. But Jean [Father Latour], who was at ease in any society and always the flower of courtesy, could not form new ties. It had always been so. He was like that even as a boy; gracious to everyone, but known to a very few.

Vaillant greets every new person he meets with excited enthusiasm, while Latour hides his dismay with impeccable manners. They remind of two little boys I know. Arriving at the playground to find other children there, one grumbles with a frown, “Oh, no! Other people!” while the other rejoices, “Oh, good, we can make new friends!” I imagine these differences will remain in their characters as they grow to manhood.

Cather came along too late in history to meet the historical Lamy and Macheboeuf, but not too late to fall in love with New Mexico, and that love shines through every line of description, whether she is describing a mountain blizzard, cottonwoods along a dry riverbed, apricots in the priest’s garden, or the peace to be found sometimes in his church. In fact, she makes us feel the way the way all these scenes are bound together.

He fitted the great key into its lock, the door swung slowly back on its wooden hinges. The peace without seemed all one with the peace in his own soul. The snow had stopped, the gauzy clouds that had ribbed the arch of heaven were now all sunk into one soft white fog bank over the Sangre de Cristo mountains. The full moon shone high in the blue vault, majestic, lonely, benign. The Bishop stood in the doorway of his church, lost in thought, looking at the line of black footprints his departing visitor had left in the wet scurf of snow. 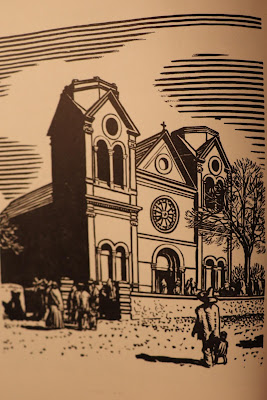