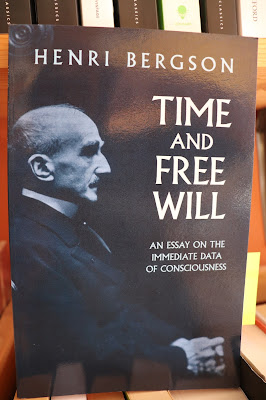 October 18 is the birthday is French philosopher Henri Bergson, who believed, even after the Great War, the one we now call World War I, in the moral evolution of mankind.

Henri Bergson believed that over the course of history human beings had evolved and were continuing to evolve not only physiologically but also spiritually and morally. Born in 1859, he died in Paris during the Nazi Occupation, and I always think he must have died of a broken heart, although he was already quite ill when he went to stand in line for his yellow star, the yellow star Jews were required to wear under Nazi rule as visible identification of their ancestry.

Bergson’s story, however, is more complicated yet.

Member of the Académie Française since 1915, he was awarded the Nobel Prize in literature in 1927. When he lectured at the Sorbonne, a section of the auditorium had to be roped off for his students, or else Parisian high society would have filled every seat. It is true that his star did not shine as brightly in 1941 as it had in previous decades — a media-stoked “rivalry” between Bergson and Einstein did not do him any favors -- but he remained a European cultural icon. So if the Nazis could only co-opt Bergson….

They were eager to make him an exception to their odious racial laws. They went further: they wanted to give him their honors. And remember that Nazi favors, even the smallest, were not to be lightly dismissed: in Germany and the occupied countries at that time, they could mean the difference between life and death. Accepting their recognition, however, would give legitimacy to a loathsome regime, so although Henri Bergson had not been brought up in a religious household and was a member of no synagogue, he refused all exceptional treatment. He was not a man to save his life by turning against others, to profit at their expense by siding with oppressors. He did not hold himself that cheap.

Because we are alive, Bergson had argued throughout his life, which means we are spirit as well as matter, we cannot understand ourselves simply by laws that govern the purely physical world. When we deliberate between courses of action, that very deliberation changes us: “…[T]he self is changing and is consequently modifying…. A dynamic series of states … permeate and strengthen one another, and … lead by a natural evolution to a free act.” In fact, because the self is undergoing modification as it deliberates, saying that we have “two choices” before us oversimplifies the question.

Most of the time, we react to situations according to our habits, as “conscious automatons." This makes for efficient action — most of the time. Only in circumstances calling for an important choice do we stop to deliberate, and then —

It is at the great and solemn crisis, decisive of our reputation with others, and yet more with ourselves, that we choose in defiance of what is conventionally called a motive, and this absence of any tangible reason is the more striking the deeper our freedom goes.

Henri Bergson had nothing to gain by obeying a racist law and wearing a yellow star. Neither could he claim as a “reason” that his wearing the star would do anything to help his fellow Jews in France.

We wish to know the reason why we have made up our mind, and we find that we have decided without any reason, and perhaps even against every reason. But, in certain cases, that is the best of reasons.

Quotations above are from Time and Free Will, the English translation of Essai sur les Donnés Immédiates de la Conscience. For more about the life and work of Henry Bergson, follow this link. What he wrote about character is, for me, the elucidation of his choice. Resisting evil was essential to his character.