Tragedy and Comedy in the Life and Writings of Thomas Mann 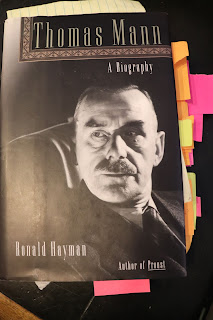 I came across something interesting the other day in a biography of Thomas Mann that I picked up to read alongside one of Mann's novels. Well, naturally, there were interesting facts on every page, but a couple of passages in Chapter 25 jumped out at me, perhaps all the more since the ideas addressed there were not elaborated on or discussed at length.

Ten years after the end of the war [WWI], French troops were still occupying the Rhineland, and reparations payments were still outstanding. In August 1928, Stresemann [German chancellor] finally persuaded France to consider early withdrawal and to authorize a new review of reparations. In February 1929 an American banker, Owen Young, headed an international board which in August submitted its assessment to a conference at The Hague. The plan was to give the German economy a chance to expand by allowing reparations to be spread over the next thirty years, and the date settled for the evacuation of the Rhineland was June 30, 1930. [Hayman, p. 391. Italics are my emphases.]

I was always told — and maybe you learned it this way, too — that Germany’s motives in supporting Hitler and launching a Second World War stemmed from the burden of reparations exacted on them from the First World War. And I’m not saying that isn’t part of the story. But what of this plan to ease the burden? Further down on the same page of the Mann biography came another event from the same year that seems to have exacerbated greatly economic conditions in Germany.

Streseman died early in October 1929, and at the end of the month the Wall Street crash precipitated an international crisis. During the winter, unemployment in Germany reached the point at which the state’s insurance scheme could no longer pay benefits. …Mein Kampf was selling a steady fifty thousand copies a year. With unemployment rising, morale sinking, extremist demagogues and uniformed thugs active in the streets with truncheons and collecting boxes, membership in the Nazi party rose from 120,000 in 1929 to 800,000 in 1931. Members were contributing 300,000 marks a month, which few of them could afford, to a party that was acting less in their interests than in those of the large-scale capitalists, some of whom were helping to finance it. [pp. 381-382]

I draw no general but at least two minor conclusions and questions from this story. First, perhaps it was not necessarily reparations alone that broke Germany’s spirit and drove its people to desire revenge. Had an international financial crisis not been set off by the crash of Wall Street, who is to say that the new terms for payment of reparations would not have been a solution, allowing time, as the international board in The Hague hoped, for the recovery of the postwar (post-WWI, that is) German economy? In addition, note that the National Socialist party, while “socialist” in name, was not a grass-roots workers’ movement but was largely financed by “large-scale capitalists.” The object of their support, of course, was to hold communism at bay.

Long after Thomas Mann and his wife had moved to the U.S. and taken American citizenship, and after World War II finally came to a close, the novelist had this to say about his native country:

‘There are not two Germanies, a bad one and a good one, but only one, in which the best qualities have been corrupted with diabolical cunning into evil. . . . The evil Germany is the good one in misfortune and guilt, the good Germany perverted and overthrown.’

Hayman, his biographer, notes Mann’s undying resentment over what Germany had allowed itself — and been allowed by others — to become:

His biggest grudge against humanity was that the civilized countries hadn’t merely failed to scotch the growth of Nazism but had encouraged it. ‘My resentment about this I shall take with me to the grave.’

Our reading circle, initiated back in 20xx to read and study James Joyce’s Ulysses together, is meeting soon to discuss Mann’s The Magic Mountain — hardly a book to be absorbed on first reading or adequately considered in a single evening’s conversation, but 2018 is running out, so we’ll do what we can now and maybe come back to Mann later. He is a fascinating writer, not only for his novels but also for the way he wrote (longhand, about a page and a half a day), the time he spent on a work (The Magic Mountain was begun before World War I and not finished and published until 1924), and the way his beliefs and commitments altered with the passage of time and events in Europe. A “reactionary” in the First War, a man who declared he “hated democracy,” he came around to working for the survival of democracy and freedom and doing all he could to support refugees from the nightmare of Hitler’s Germany. Initially, worried that his novels might be banned in Germany and that he might lose his German citizenship (fears that were, unsurprisingly, eventually realized), he hesitated for a long time to speak out against the Nazis. What to say, when to speak, and how -- these were questions that tormented him. He finally made a public statement against Hitler after six years of living “in exile,” and his biographer comments, “A braver man than Thomas might have come out into the open sooner, but Hesse never came out.”

The Magic Mountain, however, begun before the First World War, was finished and published in 1926, some time before the rise of Hitler. The Magic Mountain is the first work of Thomas Mann’s that I have ever read, and coming to it with little idea of what I would find, I was surprised to find myself laughing out loud in later chapters, even given some of the book's heavy themes of death, decay, and corruption. When you look at a portrait of Mann, he hardly looks like a humorist (and I don’t mean to suggest that he was some kind of German Mark Twain — hardly!), but he found much in human life and civilization ridiculous. When spiritualism overtakes the residents of the Sanitorium Berghof, for example, or when the charismatic Dutchman Mynheer Pieter Peeperkorn (modeled in part, at least physically, on the author’s friend Gerhart Hauptman) holds forth at a picnic by a thundering waterfall, declaiming and gesturing to an audience that can’t hear a word he is saying, a reader feels that Thomas Mann was having a wonderful time poking fun. If you’re a traveler, you may be interested in this New Yorker piece about other travelers making a pilgrimage to find the setting of the novel.

All in all, I’m very glad to have read this novel by Thomas Mann and expect to take his advice and read it a second time. It also occurs to me to mention, in light of current world events, that Mann and his German-Jewish wife were immigrants to the United States.

The Magic Mountain
by Thomas Mann