“Sunday off” is a magic phrase. Like “weekend,” it isn’t part of my summer vocabulary, but once September rolls around, I’ve earned a little time off, and when a Sunday in September begins so rich in promise, the open road beckons, speaking much more loudly than yard chores and certainly more compellingly than housework. I came to the end of a delicious book as the sun came up over the woods, and that was enough reading for the day.


Off down the road we went! South! Opposite the direction I go most mornings!

Following breakfast at Art’s Tavern, we ventured down an unpaved side road to a little inland lake south of Glen Arbor. Other dogs were frolicking in the water, and we broke our Sarah’s heart by not letting her join in the fun! Cruel, cruel dog parents! 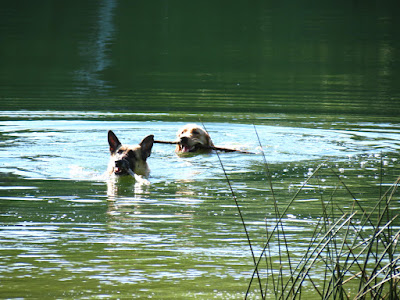 Our expedition had barely begun. We hadn’t brought a towel. Sarah would acknowledge no merit in our excuses. So, “Time to move along,” we told her. Before envy completely spoiled her day.... 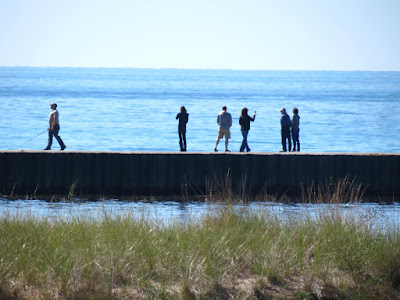 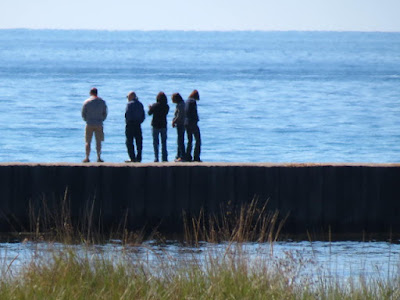 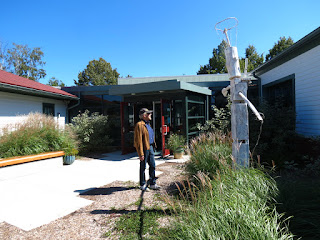 Strollers and fisherman shared the breakwater at Frankfort, a scene we took in from across the Platte River outlet, sharing a cup of coffee before a visit to the Oliver Center for the Arts, where a very colorful show was in progress. You must take my word that it was colorful, or go see it for yourself, though, because I kept the lens cap on as we made our way through the galleries (in which an etching by L. C. Lim, an artist I do not know, kept pulling me back again and again). When we got to the pottery studio, though, I could not help seeing still life compositions everywhere I looked, and while David visited with the potter, I let myself frame a few shots. 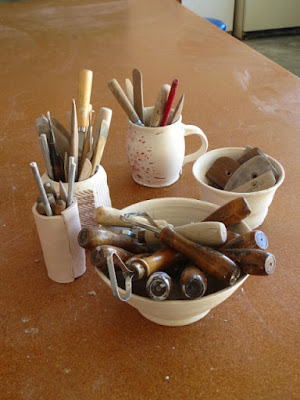 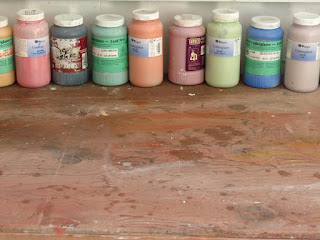 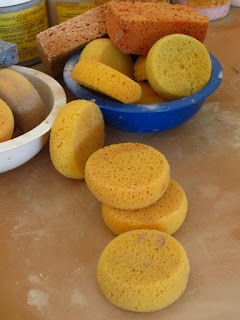 South of Frankfort, in southernmost Benzie County and into Manistee County, landscape and scenery looked more and more like the U.P. to me. Towns there are simpler, country houses more modest, and the perils and tribulations of modern civilization comfortably seem far-off. Elberta exhibited a bit of change but not too, too much. Between Elberta and Arcadia we ventured off two-lane blacktop onto a dirt road that narrowed quickly to two-track and then threatened to disappear altogether, crowded on both sides by impenetrable wetland growth. There was nowhere to turn around, and so we had to go on, not daring to stop in loose, soft sandy places or muddy stretches with deep holes. But isn't this just what we had gone seeking? Adventure! A road completely new to us! Coming onto higher ground, with a cornfield on one side, we stopped to stretch our legs and let Sarah stretch hers. At the edge of the cornfield was a pile of fresh scat, with lots of cherry pits and corn kernels showing. I walked down the road a way and found raccoon tracks. Back in the car we continued on our way and eventually came out onto pavement again, none the worse for our exciting detour. Rather the better, I like to think. But I took no pictures on that little road. Private adventure, secret road.

In Arcadia we found a public bench on a dock on the edge of Arcadia’s long, lake-like harbor and soaked up peace and sunshine for a while, sharing a fresh, crisp apple and a bottle of cold water from home: heaven enow. Across the water and behind the sand dune was Lake Michigan.

Exploring old boatyards exercises the dream muscles (although ours are never inactive for long), and here was no exception. Neither of us is or ever will be a sailor, but we both appreciate nice lines. 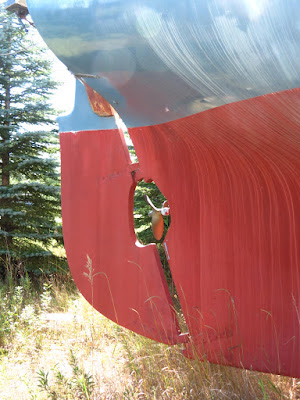 Then David finds a boat that could use improvement and expounds on its shortcomings and needs, and I discover a flowering plant I associate with Lake Huron rather than Lake Michigan and attempt to impress him with my find – and his interest in botany equals mine in remodeling boats, but never mind! We are patient -- and familiar -- with each other’s pet obsessions after so many years together.


Circling back through Honor, we stopped for cheeseburgers at the Lumberjack Bar & Grill. As we looked over the menu, two couples in the booth behind me were packing up their leftovers, and I heard one of the men say, “No, the dog won’t eat pickles.” Suddenly I felt a happy kinship with strangers whose faces I could not even see. Without leftovers at the end of my own meal, I saved the last bite of cheeseburger to wrap in a napkin and take out to patient Sarah, waiting for us in the car.

All day long the light seemed golden, with none of that flat, white, washed-out look so usual in the middle of a day. Was it the time of year or because we were so near water that the low fall sunlight was bounced back up and all around us? “Like the light in Italy,” David affirmed when I cautiously ventured my hypothesis. (Neither of us has ever been to Italy.) Perhaps we have seen days just as beautiful but not more beautiful, surely!

There were many photographs I did not take, but back at home, as evening pulled the sun down behind the neighbors’ hill, it seemed I would be able to see this day forever and that along with images of trees and water and fields and golden light pouring down, soaking through, animating everything, I would remember as well our desultory conversation, shared memories evoked by well-known scenes and impossible but entertaining dreams sparked by less familiar horizons.

Wonderful. The best kind of road trip is one where there are secret photos kept only in the heart.

So glad your first day off in eons yielded such a fine adventure. I enjoyed reading about it, and the images were wonderful.