In the Sands, the Dust, the Snows, and the Mud of Time 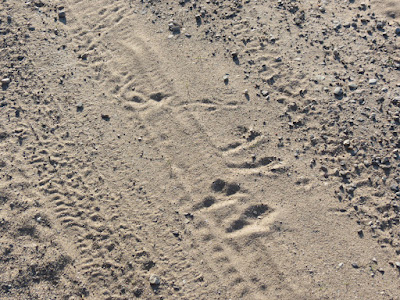 [A] track is a temporary thing. Unless the mud goes suddenly hard and turns gradually to stone, tracks do not last. They fade, and as they dry, the wind sweeps them relentlessly level to ease its way across the ground. Tracks exist at the interface where the sky drags along the surface of the earth. They exist for a relatively brief time in a narrow level near the surface of the ground where the wind and weather move across, changing the temperature and building information into the track. Nature conspires to steal even the traces of passage. Most tracks made in the world go under unseen. I try to follow every one I can.
- The Tracker: The true story of Tom Brown, Jr., as told to William Jon Watkins. 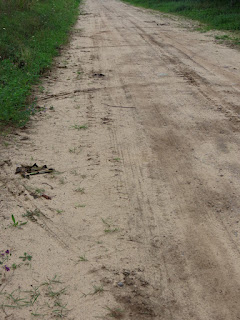 One of the many glories of an unpaved road is the way it holds tracks. On our morning walks, Sarah sniffs the grass and weeds at the side of the road: that’s her morning newspaper, her nose telling her who’s been where and what's gone on. While she uses her nose, I depend on my eyes to note the patterns made by a tractor, trails of another, earlier walker, the narrow, winding path of a snail, tiny bird footprints, a place where a deer leaped or stepped daintily across the road or where a coyote trotted or strolled, or the surprise evidence that sandhill cranes have been in the neighborhood. 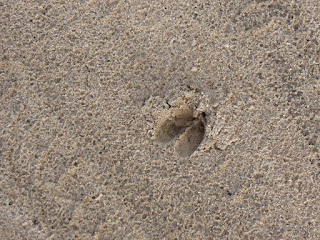 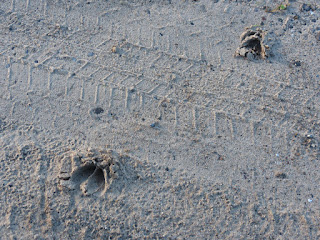 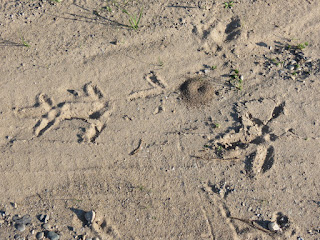 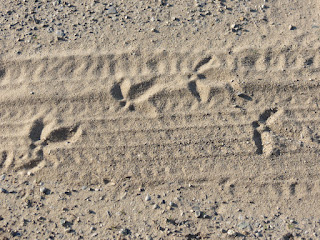 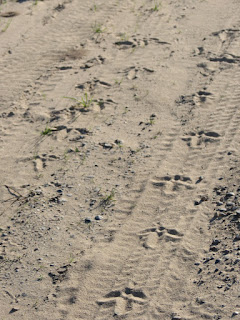 Until the rains come, that is, washing the slate clean until the next round of news is printed. 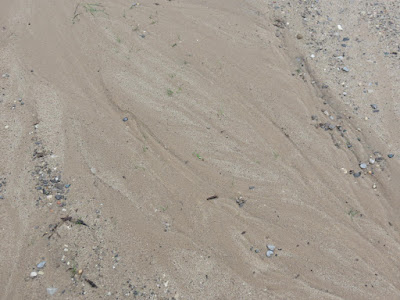 Noting tracks, following trails gives me an anticipation for winter and reminds me of the year I spent an hour a week just sitting outdoors, being in one place.

The more we learned to let our attention wander and come to rest on the thing at hand just often enough to catch the disturbances, the better we became as trackers and as observers of the woods.

I was reading those words one morning out on the front porch, before sunrise, with many different messages coming to me through the window – tapping of a woodpecker, crow’s call, screech of jay, rustle of linden leaves, my attention wandering easily and seamlessly from the words on the page to the outdoor sounds and back again.

Our intrepid Ulysses reading group will be getting together next week to discuss Hemingway’s Nick Adams Stories and to propose our next reading adventure. Now that summer is over, we will probably return to “challenging” books, books for which we feel the need of “a support group,” as one member called it when we first came together to read James Joyce. But first we’ll be talking about Hemingway, and I’m still sorting through my responses on that score. Never mind separating the man from the myth – it’s separating the writer from the myth that concerns me.

A recent New York Times “Bookends” piece asked, “Do We Mistake Inaccessibility for Brilliance?” In other words, if a book is very, very long and difficult to read, do we think it must be a work of genius? Hemingway does not force us to that question, especially with his short stories. His style can hardly be called convoluted.

Out through the front of the tent he watched the glow of the fire when the night wind blew on it. It was a quiet night. The swamp was perfectly quiet. Nick stretched under the blanket comfortably. A mosquito hummed close to his ear. Nick sat up and lit a match. The mosquito was on the canvas, over his head. Nick moved the match quickly up to it. The mosquito made a satisfactory hiss in the flame. The match went out. Nick lay down again under the blankets. He turned on his side and shut his eyes. He was sleepy. He felt sleep coming. He curled up under the blanket and went to sleep.”
― Ernest Hemingway, The Nick Adams Stories

Does the simplicity of Hemingway’s style mark it as as a work of genius? Did he, as has often been said, as he himself seems to have claimed, give us a new way to see the world?

In a way, it seems, every writer with a voice of his or her own cannot help giving a new way to see the world, for despite our commonalities and connections and dependencies, despite the cultural grids through which we perceive, each of us must perceive the world for ourselves. I cannot see through your eyes or hear through your ears: what world do I have to offer except the one my own eyes and ears, my own hands and feet and nose and mouth and skin and muscles give me?

So that can’t be the question. The question has to be, instead: Do I see the world differently for having read Hemingway? Do you? Or can any of us only read his work through the myth of Hemingway the writer?

I’ll leave the questions there for today, but please feel welcome to leave your two cents' worth. It's a quiet, rainy Friday. Sarah and I are at the bookstore. What are you doing with this only September 18, 2015, of your life? 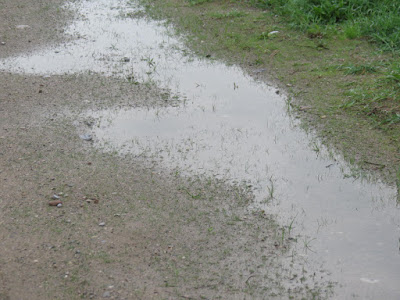 We are in a little B&B in northern Quebec. I feel like I'm in someone's home, and I guess I am. I tiptoe around so as not to disturb anyone. Shortly we are going down to breakfast, then out and about to see what is here. It's good to be away from the city.

Dawn, I'm sure the rest of the day was wonderful for you, too. Love following your travels!

Wonderful post! I really enjoyed your photos and commentary on tracks. As for seeing the world differently having read Hemingway, it's hard to say, specifically. Reading authors like Hemingway and Wendell Berry, who have a deep connection to nature, affects me emotionally as I read their works; I have learned to observe nature more keenly, such as with the quote you shared. Their ideas,however, resonate with me and eventually become integrated with my own and it's difficult to unravel what is mine and what comes from them.