On the Ground in Apache Pass

You’ve been with me to Fort Bowie before, when my first day on the trail with my sister brought many unexpected delights. This year I joined three neighbors, and they doubled the challenge: we would hike in both directions, returning not on the low country trail we would take in but by way of a high ridge. I was assured that the mileage would be no greater — 1-1/2 miles each way, for a total of 3 miles — and that surely I could handle it. After all, I’ve routinely been doing a couple of miles back in the neighborhood once a week or so on dog-walk mornings.

Because the trail we took in from the parking lot trailhead to the ruins was, for the most part, a repeat of last year’s story, I won’t go over every detail. A few, however, will serve to introduce my fellow hikers from Dos Cabezas. First is Therese (above), the day’s driver and my regular dog-walking companion back in the ghost town.

Ah, but already I need to slow down here (as I did so often on the trial!). About three-quarters or more of our way to the fort, my energy level was dropping. Double-checking, I asked Therese if we would stop for a rest break when we got to the fort, and she assured me that we would but said we didn’t have to wait until then. We were coming at that very moment to Apache Spring, a lovely, shady spot with a trickle of flowing water and some nice, big rocks for seating. The other two hikers (to be introduced shortly) were agreeable, and we slipped out of backpacks and dug out comestibles. The water was low enough that I had a chance to explore back almost to the spring itself and to see much more of that cool grotto than I’d seen before from the trail, and that was as satisfying as the rest and refreshment. 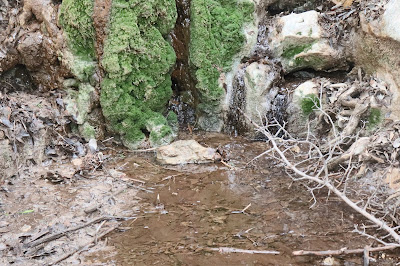 And now you meet Dorothy and Sam. These intrepid hikers and birders own and operate the Dos Cabezas Retreat B&B (sorry, they are booked solid for the next 26 days!), and they still find time and energy to put in plenty of volunteer hours in Cochise County. Last month they volunteered for the second year with the Wings over Willcox festival, and they have put in a total of about 40 hours (spread out over many weeks) right here at Fort Bowie, where willing hands under the supervision of a fifth-generation mason from Mexico are using old methods to stabilize what remains of the fort.

Sam and Dorothy have worked on many sections, but this particular little ruin, this old wall section of the old artillery gun shed from 1890, is one for which they feel particular fondness.

The inviting porch at the ranger station/visitor center seduced us with its beautiful rocking chairs, and our second short break stretched to a full half-hour, as we caught our breath and rocked and visited with volunteer rangers who live the non-winter months of the year in Bozeman, Montana.

But soon it was time to take up the challenge! The trail up to and along the ridge! Our path up (new to me, remember) climbed and climbed and kept climbing, and the higher we climbed, the more spectacular the views. The layout of the fort ruins, spread out before our eyes so far below, looked tinier and tinier in the immensity of the surrounding mountains as we rose above it.

To our northeast lay the San Simon Valley, straddling the Arizona/New Mexico border, and to the northwest towered Government Peak, a mountain in our own Dos Cabezas range. In fact, from where we were, Government Peak was hiding the distinctive, more familiar, and, by us, much-beloved twin peaks from which our range takes its name. Apache Pass divides the Dos Cabezas and Chiricahua mountain ranges, and it's clear how welcome that mountain opening with its freshwater spring must have been to everyone traveling from East to West. 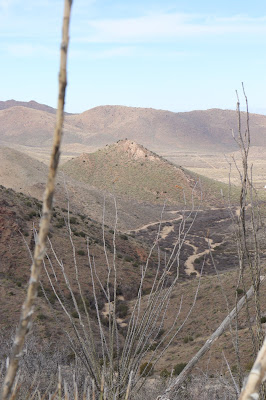 And oh, the vegetation! We made our way over hard rock and loose stones through a veritable forest of ocotillo wands. “Ocotillo likes limestone,” Sam remarked. And sure enough, on our way down, when we reached the fault line on the path — identified by a sign pointing to the line where sedimentary limestone is left behind and a subregion of igneous granite entered — ocotillo immediately gave way to beargrass, the two different plants keeping each to its own bedrock territory, with areas as distinctly marked off as Midwestern fields of corn and soybeans separated by a fence or hedgerow.

While I was almost invariably bringing up the rear, sometimes Dorothy lagged behind with me, and that was fun, because Dorothy has an eagle eye for spotting tiny natural wonders, such as an old praying mantis egg case on a branch or a baby cactus hiding under a larger, sheltering plant.

Other times it was Therese who slowed her pace to be companionable. “I just love plants!” she exclaimed once, after the two of us had paused to delight in bright green ferns and patches of fruiting moss in moist cracks of rock shaded from sun, while Dorothy and Sam led the way ahead.

Sometimes, though, I stopped long enough with my camera that the other three grew small in the near distance ahead, and if a mountain lion had been stalking us, I would have been its dinner. But somehow that dire possibility seemed remote, and I enjoyed my quiet moments, too. I smiled gratefully and happily to myself, looking at my hiking companions farther up the trail and knowing with confidence that they were keeping tabs on me, too, and would miss me were I to slip on a loose rock and plunge off the side of the mountain! 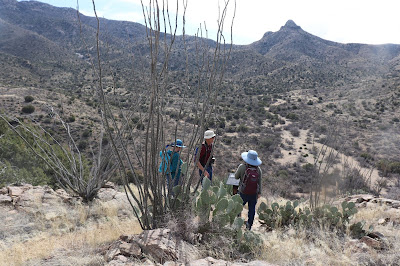 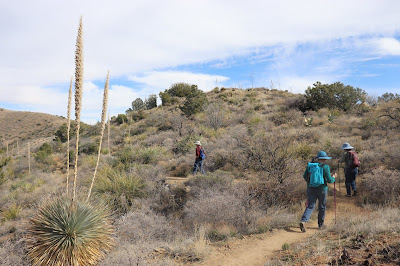 The weather forecast for the day had foretold cloudy skies and temperatures in the 50-degree range. The longer we were out, however, the brighter the sun and the more layers of clothing we shed, and by the time we were on the road back to our ghost town the outdoor temperature had reached almost 70 degrees Fahrenheit. So will we have rain tomorrow? Will we have, perhaps, even snow? What will be, will be. Whatever the future, our happy quartet was brimming with contentment, even as we began excitedly planning our next outdoor adventure.

When Therese dropped me off back at the cabin, the front door was wide open to let the sun stream in, and David and Sarah greeted me eagerly. “Did you two go anywhere?” I asked the Artist. No, he and our dog had stayed home, enjoying the day at the cabin. All three of us were happy with the day we had had.

But I do have one final doubt, because I find it hard to believe my friends and I walked only three miles. With all the ups and downs and steep climbs and big steps, it felt like at least five to me. 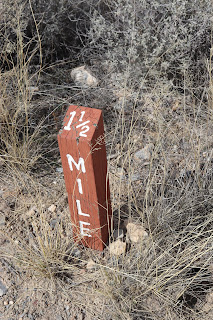 Loved our hike and what a beautiful day for hiking. Hard to believe the Apache Wars started right there with a young hot head who didn't trust the Apache, but water was needed. I have always heard, "Whiskey's for drinking, but water's for fighting. I guess it is more so in the desert.

It was a beautiful day, wasn't it, Dorothy? I hate to think of those wars, or what quickly became an extermination campaign, starting there. From what I've read of Cochise, he was a man of his word and furious at not being believed when he said his people had had no part in the kidnapping. (For readers who don't know the story, here it is: https://truewestmagazine.com/what-is-the-bascom-affair/.) "Water for fighting" breaks my heart, with water wars underway today in the Southwest, because water is LIFE. Back then, the pass and the spring provided the occasion for collisions of culture over land and game. Ways of life were so different, too. And Americans are still fighting (each other!) over how to live together in this beautiful, beautiful world....