Who Doesn’t Love a Mirror? 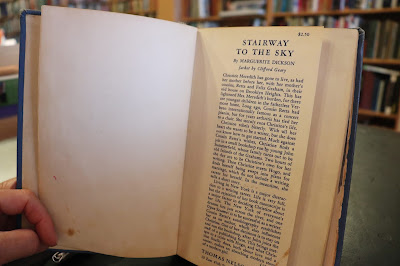 Christine threw the library books on the bed with a slam. According to Cousin Henrietta, there lay the cause of the whole trouble.

“Books! Why don’t you take an interest in something else for a change?”

- Stairway to the Sky, by Marguerite Dickson


It’s hard to tell much about a very old hardcover library book without a dust jacket, especially one with an unfamiliar title, but this time I recognized the author’s name, so I looked inside, where — luckily for me — some librarian in the mid-20th century had pasted onto the half-title page the front flyleaf of the original dust jacket, giving this tantalizing information about the story: Stairway to the Sky was a book recommended for (presumably girls) ages 12-18, and the central character a young woman, gone to live with cousins in Brooklyn, who wants nothing more than to be a writer. When she has the good fortune to be offered a job in a small Brooklyn bookshop, her Cousin Retta is not pleased! Here’s a bit of dialogue from the second chapter:

“Ruffles,” she said. “Dinky little ruffles. It’s not my idea of suitability, since you ask me. What kind of place is this you are going to work in, anyway? And haven’t you got a proper blouse to wear?”

“Oh, it’s just a bookshop, a little bookshop, tucked into a corner of one of those old brick buildings on Fulton Street just before you get down to Borough Hall….”

-- “Just a bookshop, a little bookshop, tucked into a corner”!

Only last week I re-read once again Christopher Morley’s The Haunted Bookshop, a novel set in Brooklyn and published just after World War I, a story I’ve been reading and re-reading ever since my parents received it, along with its predecessor and companion novel, Morley’s Parnassus on Wheels, as Book-of-the-Month Club selections when they were reprinted in the 1950s. Every proprietor of every shop that deals in secondhand books has read Morley, I’ll wager, and I sometimes suspect he bears heavy responsibility in the afterlife for getting us all into this business in the first place. That is not to cast blame, of course. More like expressing gratitude.

Going back now, though, to Marguerite Dickson’s Stairway to the Sky, published in 1950 and also set in Brooklyn, I wonder — were the Fifties a Golden Age of Bookstores in America? Of Brooklyn bookshops?

Mid-century was certainly some kind of golden age of books for teens, both boys and girls. Adolescent novels back then did not plunge their young readers into dystopic realms — a dark future just around the corner — but kept to the mundane, fascinating, burning questions of school, dating and career dreams, always with a satisfyingly happy resolution by the time the last page was reached. In the case of this novel of Dickson’s, surely our heroine, Christine, will get a grip on her emotions (and her hormones, unmentioned in the book) and realize that she can never be happy with take-over Hugo, who keeps insisting that she give up not only her bookstore job but also her writing dreams to settle down in the suburbs as his stay-at-home wife!

I suppose it’s only natural that so many women who have written books for girls often wrote about girls who wanted to grow up and write books. Think of Jo in Little Women as the prime example. (Was she the first?) Remember how she tells Laurie she cannot marry him because he would come to hate her “scribbling”? Writing girls are plentiful in teen stories, while writing boys seem concentrated more in adult-level coming-of-age novels. Bookstore girls and boys, on the other hand — how many of those do you remember? I was surprised and delighted the other day to discover Dickson’s Christine! 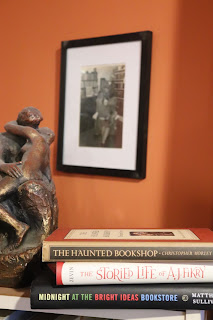 And is it only my imagination, or has there been a recent resurgence of novels set in bookshops, movies with bookstore themes or at least key scenes set in bookshops? Any number of nonfiction books about small town bookstores around the world? Can it be, as the Age of Terror induced by the Online Behemoth dies down somewhat and people rediscover their neighborhoods again and the treasures right in their own backyards, that we are entering a new Golden Age of Independent Bookstores?

Naturally, I’d love to think so. Be that as it may, happy Independence Day to you!
P.S. As for that fabled bookstore aroma, you can find the explanation here in a post by my good friend, retired bookseller Helen Selzer — I wish Helen would return to writing her blog. I miss her thoughts on books and movies. Helen?

You shame me, Pamela. You write so beautifully and unlike me, you never flag in your efforts to keep your blogs going. I consider it an honor that you miss my blog, and that you liked it enough to mention it in your wonderful post. Thank you.

One quibble if I may: booksellers never really retire. I’ve no store now, but I’m still very much a bookseller!

Loved this post! Puts me in mind of A Tree Grows in Brooklyn... a bookish girl in early 20th century Brooklyn!

Helen, my intention was to praise you, not to blame you! But I would love, love, love for you to resume your blogging. Another aspect of not being retired, maybe?

Barbara, A TREE GROWS IN BROOKLYN is one of my favorite books of all time. And yes, Brooklyn, too!