Save Your Kids the Trouble?

My mother was not a hoarder, by any stretch of the definition, but she did accumulate a lot of stuff in her home of 68 years. Three children grew up there. Also, my mother loved clothes and jewelry and knick-knacks and holiday decorations. She was a reader — books, newspapers, magazines. (No, she did not stockpile the old newspapers and magazines: those were recycled, as were many of the books that didn’t come from the library.) Photographs, clippings, old family-designed and -crafted holiday cards, and other souvenir mementos meant a lot to her, too. So when she died recently, my sisters and I had a lot of sorting to do, and we haven’t finished the job yet. Not everything that feels significant during grieving is personal, as I wrote in my last post, but a lot of it really, really is. 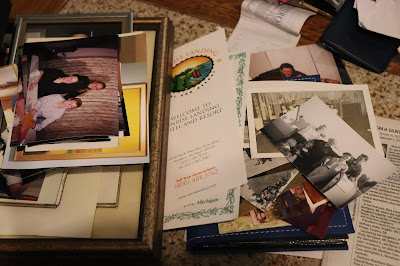 And there were some wonderful, heartwarming surprises awaiting us! One priceless treasure was a scrapbook our mother had put together in the middle 1940s, when she and our father were dating, then became engaged, and eventually married in Chicago and embarked on their new life together in Aberdeen, South Dakota. My sisters and I had never seen this scrapbook before. It was hidden away (why hidden? simply forgotten?) on the back of a top shelf. Along with saved slips of telephone messages and theatre programs and tickets, our mother had written notes on the pages to which the souvenirs were pasted.

On the first page of the scrapbook is a theatre program from early 1946. My father (not yet my father) had come by train from South Dakota (where he led a survey crew for the Milwaukee Road) to Ohio to visit his father and stepmother in Columbus and stopped in Springfield on his way. In Springfield he and my mother (not yet my mother) attended a play. There is a note left at my mother’s office (she worked as a secretary after high school graduation; the college scholarship she was awarded would have paid half her tuition, but her parents could not afford the remainder) saying that “Mrs. Gilbert” had called. That would have been my father’s stepmother in Columbus. Subsequently my mother made a trip out to South Dakota to see my father, and they became engaged. We girls did know about the trip and the engagement. As my mother said, she knew she’d better come home with a ring after traveling so far to visit this man!

A letter dated August 23, 1946 (not pasted into the book), from the woman we always called Auntie Grace, our mother’s best friend and roommate before Grace and Gene were married in 1945, was signed “‘Becky,'” Gene & the girls,” her maiden name being (I think) Becker, and she and Gene were married in August of the previous year, so the twins must have come along right away. “Just a year ago today you arrived in Kazoo for my wedding. Seems like years have passed since then!” She writes in reply to Nora’s news that she and Lloyd are engaged to be married. “Believe it or not I wasn’t even surprised — just ever so happy for you. I guess I’ve sort of known all along that “this was it.” It just sounded “right” for some reason or other. I called Gene right away and when I said “Nora’s engaged!” he just said “Yes” — he’d expected it too.” Grace/'Becky' hopes Lloyd will be transferred from Aberdeen, South Dakota, to Chicago so the two couples will live closer to each other. That didn’t happen, but in 1950 my father changed jobs and went to work for a smaller railroad (from the Milwaukee Road to the Elgin, Joliet, & Eastern), and he and my mother and I moved to Joliet, 45 miles southwest of Chicago, where my two sisters were born.

On the page with the newspaper story of their wedding, with my mother (not yet my mother) looking radiant and beautiful, she had written by hand on the now-brittle page, “My lovely double white orchid corsage — many envious glances were directed at this!!” (My mother was the queen of exclamation marks all her life!) Wedding luncheon at the Blackhawk Hotel in Chicago: Grace and Gene were there in Chicago for the wedding, along with my mother’s mother and Phil Mueller, best man. Who was Phil Mueller? HIs name is unfamiliar to me. 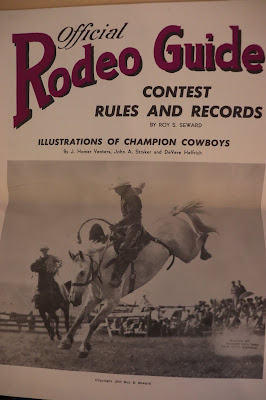 “On Decoration Day [this would have been 1947] we moved into Ted & Anne Streibel's while they were out of town for the summer, Ted on the Sperry Car, & Anne & children visiting. August was a terrifically hot month — and Dr. King says I’m right about being pregnant! On one of the cooler evenings we took in our first rodeo — Edna joined us (Bob in Madison now).” She was pregnant with me — barely — and so in a sense my parents’ “first rodeo” was mine, too, as I attended in utero.

Birth announcements, holiday letters, theatre programs, newspaper clippings — she saved everything, but there is nothing more pasted into the scrapbook after the first childless Aberdeen days. Once the first baby came along and then the move to Joliet, Illinois, and, in time, two more babies, my mother’s paper mementos remained loose, in boxes and envelopes. For example, as a senior in high school, I received a National Merit letter of commendation, along with five others in my class. Two or three were awarded scholarships, but our superintendent is quoted in a newspaper article as saying he is proud of all of us. (One of the other letter recipients, a boy from my homeroom, I learn died two years ago. How is that possible?) Ephemera, all of it.

Her daughters only saw our mother’s scrapbook after she died, when one daughter discovered it high in a bedroom cupboard. Had she forgotten she had it? What if my mother had decided to clean out those cupboards and “get rid” of all that old stuff, “to save her kids the trouble”? I shudder to think of what we would have missed!

Not all objects remaining in the family home are equally precious, but each speaks to me of my mother:

Also, going through these things together has been and continues to be an important grieving and bonding experience for my sisters and me. Our mother’s death was unexpected. I thought she would live to be 110. She was fine only the day before she went to sleep for the last time. In one way, you might say it’s “trouble” or “a lot of work” to go through her things, and so it is, but that’s not the whole story. These tasks are valuable to her children in their mourning process.

Sudden death is so hard on those left behind. And sorting through all the things...we haven't actually done much more than donate clothes to a nonprofit. We can't seem to throw much of anything away.

When my mother passed, it was only me to sort through things. Rightfully so, my brothers said that I would know best. It was hard all alone, but made boxes so each of her great and grandchildren had Christmas decorations and momentos from mom and even my dad. But, in hopes of moving to Arizona to be near me, she had started to give some things away ir make a list of who should have something. No one prepared me for the box of cards from my dad to my mom. He died 30 years before her. That was very hard to read the sentiments. After a few, I could not. They were their private thoughts not for my reading.It has been almost 3 years. I am still grieving. Thank you for sharing the beauty of your mother.

Well, just to see if I can and to practice, I'm posting here too.

amela, Thank you for this amazing reflection/story/essay. It is such a thoughtful comeback or antidote to the US internet meme/fad “Swedish death cleaning.”

Going through my aunt’s and mother’s things was tremendously significant and helpful for me, even without siblings. It was work, and often heart-heavy, but also joyous, surprising, and a tremendous labor of love that I could do even after my cherished relatives’ deaths. (I’m not advocating leaving behind messy or impossibly large amounts of stuff for relatives; but sometimes it can be a gift to find things, to find meaning in things, that my folks would never have realized could mean so much to me). Thanks again for your thoughtfulness.