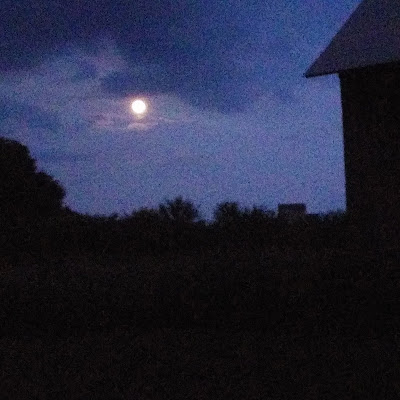 The image above (not a very good one) doesn't show this morning's sky. I referred to the moon over the barn on June 30 but was unable to upload my image then, so here it is on July 3. Sadly, I remain unable to upload the image from Fleda Brown’s TEA event at Dog Ears Books. The moon was on my phone, Fleda on the Artist’s camera. Technical challenges continue.

But each night continues to give way to another day, and up at 4:30 a.m. on this day before the 4th of July, I picked up a book set aside a year ago or more, about halfway through, The Physicist & the Philosopher: Einstein, Bergson, and the Debate That Changed Our Understanding of Time. One reason I set it aside was my inner editor’s constant carping: I wanted more smoothly flowing sentences, cleared of unnecessary obstructions, and I found repetitions annoying, jumbled chronology confusing. My other reason was more personal: Since first making the acquaintance of Henri Bergson’s work, I have loved him, and to read an account of the “controversy” during his lifetime, controversy fomented by interested philosophers, scientists, and journalists who pitted him against Einstein as if the two were boxers in a ring — well, it was just too, too sad. Bergson and Einstein had very different concerns,  therefore different thought objects, definitions, and arguments, and neither was vitally interested in the other’s chief concern. How does a downhill skier compete with a figure skater? Skiers will judge for one, skaters for the other, ¿claro?

Philosophy stimulates thought in ways different from the stimulation of fiction. My mornings this summer more often begin with novels, but life used to be very different. Back in graduate school days, all my mornings began with philosophical arguments. One night, I recall, I slept not at all, so furious was I with Bertrand Russell’s clumsy attack on Bergson, whom he had completely failed to understand. I spent that night spent writing furiously, arguing with one dead philosopher for his failure to comprehend another!

During my first year of graduate work, in fact, the only way I could go to sleep at all most nights was to turn to the familiar novels of Jane Austen. I had all of them lined up at the head of my bed, so that when I reached the last page of one I could pick up the next, working my way to the end the line and then starting over at the beginning. Jane Austen was a comfort. Bertrand Russell was not.

But mornings — ah, it is not such a bad thing to have one’s mind jolted awake by thought in the morning! And today it occurred to me long before sunrise that while certain philosophers have criticized what they disdainfully call “the god’s-eye view,” a perspective they say human beings often try to assume but can never realistically inhabit, the “subatomic view” is just as much outside human experience. Solid objects are not solid, the physicist tells us. Solidity does not exist! Accepting that there are gaps and spaces between atoms, what has this to do with life as we live it? With the “too, too solid” nature of our bodies and floors and the earth itself in terms of our experience (though we gardeners know healthy living soil to be full of earthworms and fungi and bacteria — anything but “rock solid”)? My question is, why is the subatomic view to be preferred? Why is it any more legitimate than the view from heaven? If one of those perspectives is suspect for being outside our experience, surely the other is, also.

Then, unbidden, an image of a doe and fawn comes to my mind. Not bothering their heads with philosophy, they stand motionless by the side of the road, the fawn obedient to its mother’s signals. Be still. Watch me. Listen. Follow me when I let you know it’s time. In some ways we share a world with deer, and in other ways we inhabit very different realms. Venn diagrams, our lives are, intersecting only at one edge, forming a delicate lentil of overlap.

After a while the sky to the west takes on a rosy tinge, reflecting sunrise, and Sarah and I stroll out into the grass. She takes off like a shot toward the barn. Must have seen a rabbit. Thing is, she often doesn’t see the rabbits if they don’t move.

Dog, rabbits, deer. They are closer to my notice and understanding than gods and atomic particles, but even to pay attention to these other creatures means taking a break from the books. Not just “the books,” as in novels and philosophy, history, economics, and such, but “the books” in terms of the profit-and-loss thinking necessary to running a largely seasonal business during “high season.”

And it occurred to me also this morning that running an essentially one-person business, as I have for 25 years now, is a lot like conducting a second marriage alongside and simultaneously with the first. There is the anticipation stage, preparation for the initial launch (engagement). Then one goes public (wedding), followed by the leap into a honeymoon, the nature of which can never be precisely foreseen, and further surprises of life together. If the business is successful, one year follows another, but none is ever just like the previous, as each brings new challenges to be met. Children? Well, as a bookseller, though my guest authors are adults, I have almost family feelings for the authors and books I choose to promote.

My husband, as friends and regular readers know, is an artist — “the Artist,” I have taken to calling him lately — and so he too has another “marriage” on the side. Art has been his life for over half a century, while I have been married to a bookstore for only a quarter-century. How does that work out for us? Are we jealous of each other’s other partners? In a word, no. There are occasions when one of us, in fact, gives priority to the other’s other partner over our own. At those times we are each other’s support system. At other times, I go my way with the books, the Artist goes his way with painting, and we come back together with new stories to share, and that’s good, too.

All these marriages — that of two human beings, of one with a business, of the other with his art — also involve many more people. Some friendships blossom and fade, others persist and deepen, but every single one of them has a place in the rich marriage history.

These are some of my thoughts this morning, before sunrise, when I have time to think, to let my mind roam.

Happy 4th of July, everyone! And don’t forget, our TEA guest (Thursday Evening Author) this week, on July 5, is Kim Schneider. That’s at 7 p.m. on Waukazoo Street, so join us if you can — and bring your visiting relatives! They’ll pick up all kinds of ideas for how to entertain themselves when they visit you.

Oh my goodness how well I remember that place and time! So happy to be heading up north to visit in a few days.

Loved this pensive and lovely post! So grateful to be part of your author family- I'll take sub-atomic or atmospheric- either way!