Where Teddy Bears Are Not Cuddly 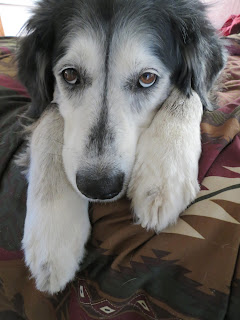 Sarah had a bath, at last. She is clean and soft again, but she's never been an especially cuddly dog.

Originally, weeks ago, I began drafting a post I called “Not Barefoot Country,” having to do with the terrain around our winter ghost town cabin. In that draft I listed many reasons, with details, for not going barefoot here: thorns and spines and prickers; sharp stones (especially the little ones); cow pies (especially the fresh ones; sunning snakes; winter cold; dust and dirt; old rusty barbed wire; broken glass; old rusty nails; splinters from odd bits of old lumber; and abandoned well pits. I added the last item not only because there are abandoned well pits nearby but also because I figured that climbing out of one, should one stumble and fall in, would be easier with shoes than without.

There was nothing particularly wrong with that draft post, and every once in a while I would look back and add or change something — for instance, inspired by cowboy lingo, I changed the tentative title from “Not Barefoot Country” to “Not Tenderfoot Country” — but somehow I kept finding more interesting things to write about for Books in Northport. And now so much has changed that “Not Tenderfoot Country” seems beside the point, like the first chapter of my dissertation, the old one I kept rewriting for two years until I set it aside and moved on to write the rest of the thesis, finally writing an entirely different first chapter when all the rest was done.

Boots on the ground are still a better idea than bare feet on the ground. That hasn’t changed. All the old hazards to unprotected skin remain. It’s just that things just look different to me now. My concerns and responses are different. For one thing, the high desert is now clothed in spring green, its look softened more every day, but even that, I realized the other day, doesn’t explain the deeper difference. 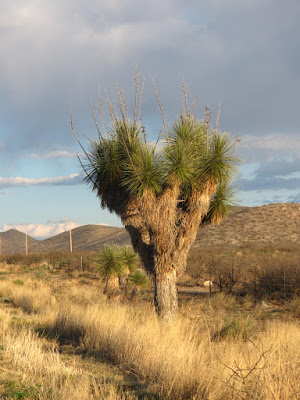 “Soaptree yucca doesn’t make me laugh any more,” I remarked to the Artist as we made our way east on Hwy. 186, home to the ghost town after a morning of exploration from Willcox to Benson to Pomerene and nearly to Cascabel. “It just looks normal to me now.” I hadn’t thought before about this change in my perceptions, but there it was. Three years ago when we first arrived, soaptree yucca brought to my mind the fantastic illustrations of Dr. Seuss, looking to my Michigan eyes more like a product of imagination than of nature. Now it just looks normal. 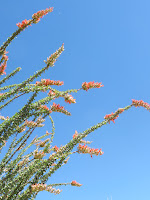 One book I read this winter, in describing Western plants, labeled the ocotillo as one of the “strangest,” and yes, ocotillo seemed pretty wild, too, when first I saw it. Now it is in bloom, and I see it as stunning and beautiful but not strange. Not at all. 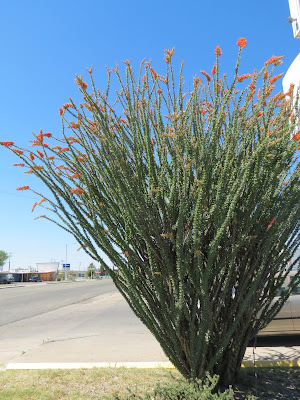 Soaptree yucca and ocotillo belong here. Strange — étrange — is another way of saying alien, and the plants native to the West are the complete opposite of alien. When the Artist and I were newly arrived, it was we who were the aliens. Now (as is true for me in Michigan, also, though not for him, Detroit-born), though we will never be native to this place, we are feeling a kind of sense of belonging. More attached, more rooted. This has been true for me for a while. 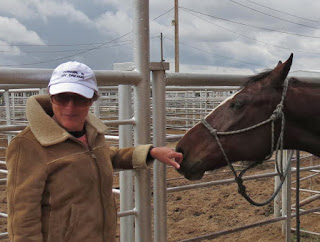 One of my Facebook friends was recently astounded by the way I thrilled to the rodeo. She didn’t know me when I was a girl on the Illinois prairie, looking out over fields of corn and soybeans across the road from my family home, looking west from our front porch, toward the setting sun, and yearning with all my heart to ride my pony (the one I never had, even after joining 4-H, but that’s another story) toward that red evening sky! My parents had bought our first black-and-white television set when I was in first or second grade, and cowboy shows — Gene Autry, Roy Rogers and Dale Evans, the Lone Ranger, Hopalong Cassidy, and later the “Spin and Marty” series on the Mickey Mouse Club show — all fueled the dreams of a little girl whose first word for horse, ‘fersie,’ had been uttered in a thrilled shriek of delight whenever, out for drives in South Dakota
with her parents in the family Oldsmobile, she spotted a horse. Finally the parents had to save their eardrums by threatening not to point out horses to her if the child didn’t stop shrieking. She learned to whisper her excitement: “Fersie!”

As for the Artist — 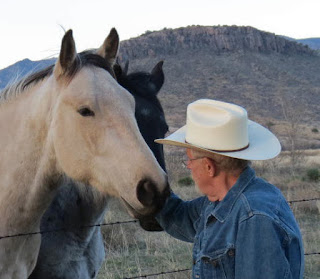 “You know,” he began thoughtfully the other day at the high school rodeo competitions at Quail Field in Willcox, “if I were young and thinking about starting a family, I’d want to do it here.” Quite a surprising statement, coming from a such a staunch Piscean! I think it was the rodeo that finally won him over. As a boy in Detroit, he haunted a local riding stable and would ride horses in the spring for urban owners who needed the winter cabin fever (stable fever?) hijinks ridden out of their mounts before they dared to ride them. When he was twelve years old, his parents drove cross-country for a ranch vacation, and he rode out every day with the cowboys. “Real cowboys,” he stresses, cowboys working cows. I love stories of that vacation, imagining myself into the scene. I tell him how lucky he was! I would have been in heaven, as he was.

So we were both “horse-crazy” kids, and we both had the West in our blood, one of us by virtue of actual experience, the other only in her dreams.

I say we drove “nearly to Cascabel” the other day. Actually, we drove as far as the Cascabel Road was paved, turning back just past the intersection with Three Links Road, both roads unpaved from there on, which was exactly what I expected we would do, tempering the road to our 20-year-old van. It was for that reason, as Trail Boss, that I had chosen the Pomerene and Cascabel roads in the first place, though the route did not reach all the way to the intriguing hot springs I knew we would never reach them, anyway. 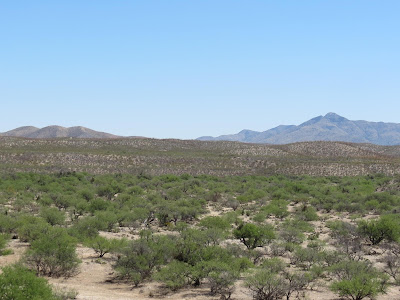 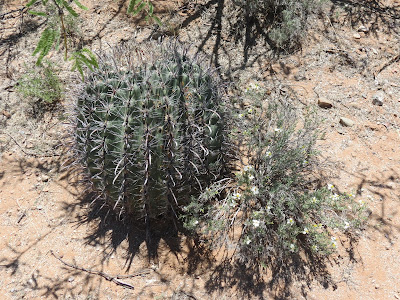 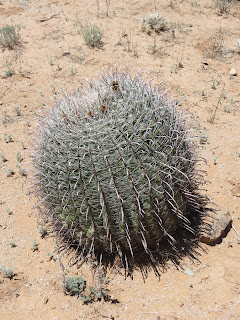 Remote! We were in in the San Pedro River Valley and could see the deeper green to our west, indicating the course of the river, and every few miles the terrain would change rather dramatically, one stretch filled with teddy-bear cholla and varieties of barrel cactus common around Tucson but not in Cochise County, certainly not in our own Sulphur Springs Valley. At the intersection where we reversed direction, I was surprised to turn the pages of the Arizona atlas and realize we were not at all far from Tucson. Not far, and yet a world away: Tucson was on the other side of the mountains to our west, and only rough trails lead across the mountains. 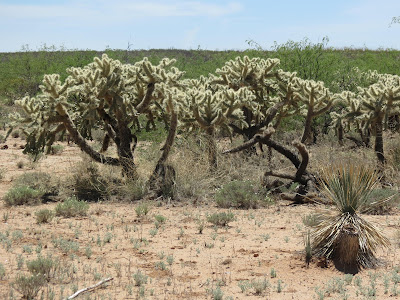 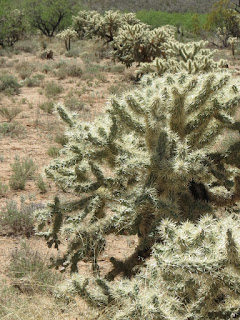 On the way back south to Benson, I had to stop to photograph the teddy-bear cholla. Though excited about being on foot in this very different kind of desert fauna, I thought I was maneuvering carefully around the plants until I felt stabbing pains and found myself limping, trying not to put full weight down on either foot. Well, that is hard to do! Pain did not deter me from my object, and I was pleased with the shots I got; however, when I realized the source of the pain, I was glad Sarah wasn’t out there exploring with me. This particular cholla, you see, so tall and stately in maturity, begins closer to the ground, much less obvious to a walker, and the long spines pierce leather like it’s silk. 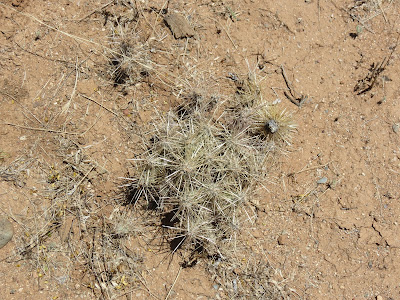 As for pulling out those spines? Thank heaven for the toolbox in the van and especially for the needle-nose pliers! And so, another desert lesson learned. Even shod feet need to be careful where they step. Bottom line, though? It was worth it. I wouldn’t have missed it for the world.

I started this little essay without a tidy conclusion in mind. Maybe, though, it’s that a place doesn’t have to be “cuddly” or even completely welcoming to call forth love. People lived here in the West before they had running water or air conditioning or internal combustion engines. The country is challenging. If you’re going to live here, the country itself sets the terms of engagement.

“So there you have it -- a walk in a high desert ghost town is not a walk on the Lake Michigan beach. But whoever thought it would be? One similarity is the sense of vastness -- the faraway, receding horizon by day, dazzling stars against a black night sky. Both Great Lakes and Southwest high desert offer those marvels. One big difference, other than flora and geology, is the stillness of the desert: there are no waves, and unless the wind is particularly strong there is almost no background sound, only occasional nearby sounds of fluttering, chirping birds or a bawling cow or calf off in the distance.” 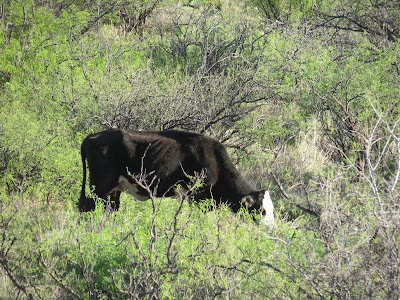 Last night the cattle were very vocal around the cabin, and this morning they are still calling to each other out in the mesquite. Their presence pleases us both, the Artist and me. We like seeing and hearing them and having them for neighbors. (Watching our step seems a small price to pay.) Birds too are vocal this morning, calling and singing all around the cabin and yard and down in the wash. Desert spring symphony, all of it pleasing.

Yep, I like it fine. I am very happy here. 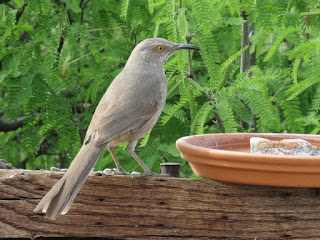