On his television travel show, chef/author/traveler Anthony Bourdain’s introduction ends with these words: “and I’m hungry for more!” That about sums it up for me, too. The only time in my life I recall being homesick was during my graduate school years on the Illinois prairie, where — although I had grown up on the prairie — I longed for the Michigan lakes and woodlands I had adopted as home at age eighteen. But graduate school was not travel. It was more like a job.

Although, to be clear, my kind of travel is not done on a cruise ship or bicycle or on foot with a backpack and would not be any kind of travel where each day presents a different scene, each brief, beautiful glimpse then quickly disappearing into a mental if not physical rear-view mirror — although that kind of travel is sometimes what takes me to my preferred kind, and I enjoy it, too, in its place. For example, I would not have missed my five-day tour of the Yucatan with friend Leonore for the world! But my favorite travel, if you can even call is that, is where I journey to and enter into a new world and settle there for a while, learning the names of the flora and fauna and the history of buildings and families. In my new world, I explore endlessly within a restricted area -- here it is mainly Cochise County -- drinking in the terrain, both closeup and to the horizon, and in the early mornings and late nights, before and after days of exploration, devouring books about the territory I’m getting to know.

That is the way I spent my first, month-long time in Paris, France. For several years I had used only a portion of my paid vacation leave, and finally I had an entire month saved to fulfill a lifelong dream. I got my first passport and book an Icelandair flight to Luxembourg, where I would continue by train to Paris. I had never before traveled alone, never crossed the Atlantic, never been to any foreign country other than Canada. I would have landed without any accommodations arranged, except that a friend, alarmed by my lack of planning, connected me to a woman in Paris from whom he had rented a room, and it just so happened that the room, though reserved for the remainder of the eleven months of that year, was available for May, when I would be there. And that was the beginning of a long, beautiful friendship with my dear friend Hélene [cannot find the other needed accent mark on new keyboard], but that is another story, one (or two) I’ve already told.

My point in remembering that time now, in the context of this post, is that not once during that month in Paris did I venture outside the city. A friend had asked me to deliver a book to a friend of his in Versailles, but when it rained I said to myself, It would be a shame to go to Versailles in the rain! and when another morning dawned sunny and beautiful I would think, It would be a shame not to spend this lovely day in Paris! And so on a rainy days I would visit a museum, staying for hours, taking breaks to sit quietly and write letters and postcards but not leaving the building because then I would have had to pay another entrance fee to get back in, and I was frugal not only by nature but also from necessity. When the weather invited strolling, I would spend the entire day outdoors, walking and walking, taking my rest breaks in the city’s many parks, where I could sit and read and write and watch life around me and feel like part of it. Occasionally there would be an espresso or draft beer at a sidewalk cafe. Whether coffee or beer, I could make it last as long as a museum visit. (Tip to travelers: whatever you eat or drink costs more outdoors than inside (and more at a table inside than at the bar) because essentially paying short-term rent on the table and chair — and it’s worth it!) And when tired of walking and not in the mood to sit still, I would board a city bus — any bus — and take in the sights that way, resting my tired feet.

In the evenings, my landlady and I would sit at her dining table with books and newspapers and stationery piled around us, and I would write letters, and she might watch tennis on television, but we would have a lot of conversation, too, resorting to dictionaries only when mutual incomprehension stopped us cold. She did not provide my meals but allowed me the use of her kitchen. I was living in Paris. It was heaven. I could have stayed on forever….

Following that spring, I spent two years in Cincinnati, Ohio, and I couldn’t help approaching my life there as life in a foreign country. Cincinnati is neither North nor South nor Midwest but an old river town with a flavor of all of the above and then some. Coming off my first trip to Europe, I saw in Cincinnati — its hills and red brick buildings, churches and schools build by European immigrants, a stunning art gallery in a beautiful park, stone walls, stained glass, and wrought-iron fences around ordinary homes — echoes of delights I had discovered on the other side of the ocean. Unlike Paris, however, Cincinnati is not a centralized city but more like a cluster of towns, each with a name, each with its own shopping district and unique demographic characteristics. Again, I walked endlessly and took advantage of cheap public transport to explore a fascinating part of my country that was entirely new to me. I was always somewhat amazed that I could cross the beautiful Roebling Bridge into Kentucky and not have to show my passport. Wherever I went in or beyond the city, though, my little apartment was waiting for me at the end of the day.

Over the years the Artist and I have practically made a second home for ourselves in Michigan’s Upper Peninsula, without owning a bit of property there, all by making extended visits to the same place, Grand Marais, and treating Grand Marais as a combination of “base camp” and home, albeit temporary. From there we may venture out on foot, to walk beaches and streets and lovely hollyhock-lined alleys or set out in car or truck to explore two-tracks or make an expedition to Sault Ste. Marie or Munising or Escanaba — or merely to wander, but my point, again, is that each night we would come home to the welcome faces of friends made over the years and to our familiar hotel room. And on our trip to France together, we spent the first two weeks in a hotel in Paris, our home base, exploring the city together from that quiet, cozy room.

So is this travel? Would you call it travel? I don’t rule out the different-place-every-night kind of travel. It has its own charms. But it’s settling in to a home away from home that I truly love. The hard part, of course, is leaving.

As I said before, I am not generally afflicted by homesickness. In fact, now I can’t help wondering, is a home away from home any less a home than one’s primary residence? Maybe it would be for someone whose family had lived somewhere for generations, or for someone who had stayed in her birthplace for a lifetime, but my family and personal history are not of that order.

These thoughts will not leave me alone as our time in the high desert ghost town of Dos Cabezas grows ever shorter with each passing day. I loved it three years ago and found leaving difficult, and this year my temporary roots have gone much deeper, so that pulling them up will be that much more of a wrench. This time it is not only cows and horses, mountains and dry washes, winter birds and spring wildflowers I will be leaving but neighbors who have taken us into their midst and made us feel so welcome in the community that now when we drive over to Benson or Tombstone or up to Safford or any other place nearby, and people ask where we are from, my first instinct is to say, “Dos Cabezas.”

How strange it will be to turn in our Willcox post office box keys and set out on the road again with a van jammed full of books and clothes! When we drive into the driveway and over the hill and see our old farmhouse again, will it look like home? Well, yes, I think so. I can see it in my mind’s eye. Will the orioles appear this year? Nesting bluebirds? When will cherry blossom be at its lovely height? Sarah will be so happy to be off her leash again!

The Artist once wrote a piece for Automobile magazine called something like “87 Cars” (this was in 1987, and the editors introduced the article with an observation that went something like “There must be something wrong with a man who can fall in love so many times.” Well, the two of us also fell in love with Leelanau, with the U.P., and with Paris. As for me (it is growing on him more slowly), I am definitely in love with Cochise County, Arizona.

Is there something wrong with me? Am I “romanticizing” all these places? I have been accused before this of romanticizing not only my own life but those of others, lives I have not had a chance to live except in dreams. I say, if loving is romanticizing, I am guilty and have no intention of reforming.

Dear little Dos Cabezas! In the three years between our first winter and these past few months, I never forgot you. I only hope it won’t be another three years before I call you home again! 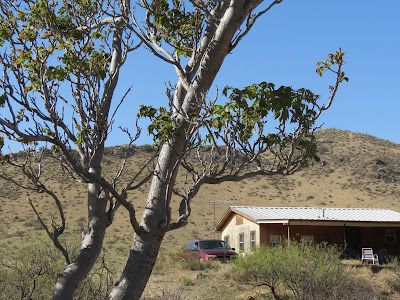