The Enduring Nature of the Written Word 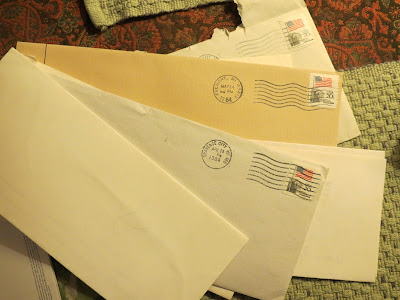 My son came up from Kalamazoo for a five-day visit over the Thanksgiving weekend, and somehow on Sunday morning we found ourselves pawing through an old trunk I had not opened for years. Oh, the treasures that emerged from that archive!

There were letters he had written me from camp when he was a kid and a little stash of hand-made “coupons” he’d given me as a gift, coupons I could redeem for various chores he would do around the house. “And you didn’t use any of them,” he noted. “I didn’t want to give them up!” I told him. “They were too cute!” Another gem was a handwritten note from a girl in his grade school class, asking me for a copy of a snapshot I’d taken of the two of them at Ian’s birthday party. “I want to see how romantic we look,” she wrote. Or rather, she printed. They must have been in third grade then, not yet learning cursive writing.

Copies of letters my grandmother had written to my mother were there, along with a copy of a letter one of my aunts had written to my mother, all of this fascinating correspondence concerning the revelation of an old family secret. I read the letters aloud to my son, refreshing my own memory with the details. I’ll keep in mind this winter the fact that my mother’s parents were married in February of 1918, making it a century ago three months from now. 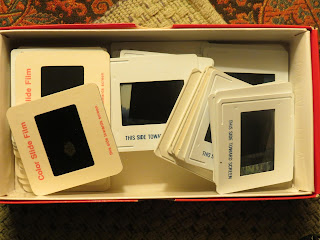 I found a box of color slides from photographs I took during my two years in Cincinnati (1987-88) and will have those made into prints and also stored on DVD very soon. (The architecture of Cincinnati fascinated me, as did the hilly terrain. It was rich territory to explore with a camera.) I also found handful after handful of photographic prints, some dating back fifty years or more. The color was not always the best, but everyone in the pictures was recognizable. 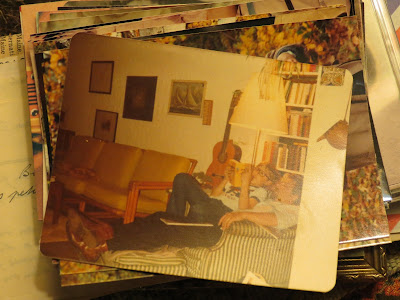 A very modest collection of receipts and tissue wrappings from purchases (e.g., cheese) made in Paris appeared. I could never bear to throw away any scrap of paper that came my way in France, with words printed in French and sometimes a reproduced line drawing of a shop front or of the Eiffel Tower. You must understand that I shivered with pleasure over the phrase “vêtements d’hiver” (winter clothes) scrawled on a box in the closet of the apartment where I first stayed in Paris. Four years of high school French and the smattering I’d picked up before that from my father had not fully prepared me for the wonder of being in a foreign country and actually managing to make my way around in another language, one I felt I’d learned in a way somewhat similar to the way I had learned to read music, another mysterious, magic, “other” language. It worked! I felt like a gifted code-cracker!

But there is plenty of magic in English, and I was thrilled to discover in the trunk a couple of irreplaceable family items I had been afraid I’d lost forever. Before they married, before they had even met, my father and my mother, each separately, collected into little books their favorite poems. In 1974 the two books were given to me. With the exception of one verse my father composed with his high school French, my parents did not themselves write any of the works in their books, but their selections are windows into their youthful sensibilities.

What did these two young people have in common? What aspects of their personalities were very different? Some overlap between the two collections gives clues, as do the majority of items found in one book but not in another. 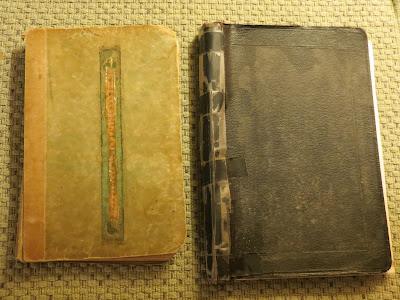 Neither book has either table of contents or index, but my father’s, titled “Favora Quotation Gilberti,” dated1941, begins with an “Indication of general trend…” listing eight attributes: amusing; slightly risqué; cynical philosophy; toward celibacy; satire; truism; good phrasing; and romantic: beautiful and healthy sentiment. Not everything in his book is a poem. Many entries are simply pithy sayings, and many verses and pithy sayings are attributed to “Anon,” for example this ironic observation that gives the lie to my entire thesis today:

Lives of great men all remind us

As their pages o’er we turn,

That we’re apt to leave behind us

Letters that we ought to burn.

There is no indication which heading he would have assigned here. Cynical, probably. There was more of cynicism and satire in my father’s collection than in my mothers, but both had generous helpings of romantic choices. And both include pieces by Edna St. Vincent Millay and Elizabeth Barrett Browning, though I note that my father attributes the latter’s words to “Elizabeth Browning,” omitting the poet’s family name, while my mother invariably used all three names.

My mother’s collection includes Sara Teasdale, Eugene Field, and Oliver Wendell Holmes. I don’t find as many entries from “Anon.” as my father had, but a few, such as the two lists “Helps for Daily Living” and “Married Wisdom” have no attribution. (Actually, the latter, which is the first piece in her book, says “Author Unknown.” Could it be that favorite of my father, “Anon.”?!) My mother’s collection also has more entries from women, the names often unfamiliar to me. There are also fewer humorous pieces in my mother’s book, so Richard’s Armour’s “A Thousand Times No” stands out:

Some take great pride in saying No,

They scorn an easy Yes.

To none will they confess.


For utterance of No they live,


Nor would they have you doubt it.


And positive about it!

At the end of my mother’s collection, following Robert Herrick’s “To the Virgins, to Make Use of Time” and Sarah Dunnings’s “These Things I Love,” comes a list of dated topics for what looks like a music class, “Hints for Song Leaders,” “How to Present a New Song,” and finally a recipe for Helen’s Peanut Butter Cookies, but my mother’s name appears nowhere in her book.

Besides family memorabilia, I found in the trunk many bundles of letters from friends, a few with literary associations. There were two letters from Jim Harrison, one from Joyce, Jim’s assistant, three from Guy de la Valdene, and one from poet Dan Gerber, all these resulting from typing, proof-reading, and editing I’d done for him and Guy and Dan back in the old days. 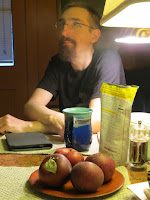 Then there was a xeroxed copy of the wonderful handwritten journal my sister kept on her first trip (with now-husband Bob) to the Boundary Waters, up from Minnesota into Canada, her first wilderness experience, with canoe portages and camp coffee and losing her camera to a black bear! I read aloud from the pages to my son (with David listening from the next room) and especially loved the full page listing of all the sounds of the wilderness, none having anything to do with traffic or phones.

All these memories are priceless to me, despite the mustiness of a trunk that had been closed for years.

As I held color slides up to the light, exclaiming over the images, my son made a comment about digitizing old media files, and that’s well and good, I suppose. But if hard copies are not kept, if only digital files remain, I worry that those files could become unopenable black boxes to future generations. They are not, after all, human-readable, and as the technology to read digital files advances as breakneck speed, earlier readers become so much junk. There is also the question of “where” the files will be stored. In a “cloud”? As my son noted, “A cloud is just someone else’s computer.”

I’ve never liked the idea of keeping my photographs or books in a cloud, anyway, and I wouldn’t want to reduce precious old letters from friends and family and photographs of same to someone else's storage black box. My old black trunk has served me well. And I have always been in love with paper and with holding physical objects in my hands.

Sliding sheets of handwriting from envelopes (first appreciating the beautiful postage stamps), turning pages, shuffling and stacking snapshots and slides are pleasures I have no intention of foregoing, as long as they are available to me, and I hope that will be for the rest of my life.

So love this post... I feel the same way about old letters, journals, photos!

Barbara, I can understand why this would echo your own feelings. We are on the same page on this question!