For December our little reading circle chose to read the first volume of Sigrid Undset’s Kristin Lavransdatter trilogy, The Bridal Wreath. Unset was the first woman to win the Nobel Prize for Literature, which was the reason given by a horrid little man in my bookstore years ago why I should be ashamed of myself — he actually shook a finger at me and said, “You should be ashamed of yourself!” —for not having read it. His angry, scolding tone put me off the book for years. Note to others: Telling someone to be ashamed of not having read something does not encourage that person to pick up the book. More to the point is to say, as my friend Trudy did when Kristin Lavransdatter came up in conversation, “For me that book was transformational!” Trudy made me want to read (rather than avoid) the work!

The Kristin Lavransdatter trilogy is set in fourteenth-century Norway, so that’s where I’ll be going a little later this month. Meanwhile, by chance, I happened upon another fictional work by a Norwegian woman, Cora Sandel. Coincidentally, Alberta & Jacob, Alberta & Freedom, and Alberta Alone also form a trilogy. Sandel was born in 1880, and much in these novels is autobiographical, set just after the turn of the nineteenth into the twentieth century. 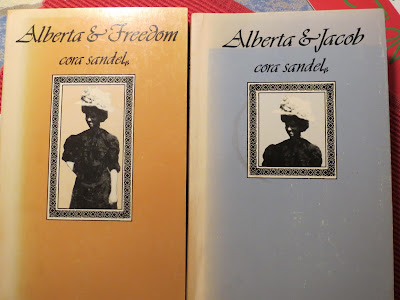 The first volume is set in a small town in the far north of Norway, north of the Arctic Circle, where we find young Alberta feeling trapped in almost every way imaginable — by a stultifying home life, her parents’ unhappy marriage, family financial worries that necessitated her leaving school, bourgeois expectations facing her, the perpetually cold climate (accentuating her mother’s coldness), and the long darkness of the Arctic winter. Cora is considered unattractive and considers herself such, as well; although her parents and brother keep assuring her that she might be presentable if she would only make a little effort, she avoids social situations whenever possible and welcomes the returning light of spring that allows her to run out into the countryside and be alone.

As winter approaches in northern Michigan, Alberta & Jacob is not the cheeriest of reading. The only time Alberta is not cold in winter is when she first wakes in the morning. After that, from the time she gets out of bed until the wonderful warmth of morning in bed, she is miserably cold.

At night she would lie huddled and trembling beneath the blanket for hours, chilled to the marrow. She made herself as small as she could, drawing her legs up under her and hugging herself. The cold would sit between her shoulder-blades gnawing like pain. She carried it in her body all day, and it accompanied her to bed. Her feet, like blocks of ice, seemed not to belong to her, and she became cramped and sore from her huddled position.

Summer brings light, warmth, and hours of freedom but also tourists and visits of those fortunate enough to have escaped to life in Kristiana or study in Paris. Picnic expeditions to the mountains last all through the night, taking advantage of summer’s midnight sun, and yet this is a painful time too for Alberta, who is not pretty, does not have pretty clothes, blushes too easily, cannot bring herself to speak her thoughts, and compares herself unfavorably to the carefree seasonal visitors.

In her immediate family, only her brother Jacob has managed to escape. In spite of parental disappointment, he managed to gain his father’s permission to go to sea.

It occurred to Alberta that ultimately Jacob was the only one who turned his true face out to the world, a face full of undaunted confidence in his own two strong arms.

And at the end of this first book, with this realization in mind, Alberta trudges up to her cold bedroom, with hope of nothing but “another day” on the morrow. Another day without her mother’s approval or understanding, another day of being trapped by bitter cold and hateful expectations.

So what a surprise to begin the second volume, Alberta & Freedom, and find Alberta living in Paris! With little if any idea what to do with her “freedom,” she is modeling for a dilettante painter in order to buy food and pay rent. Winter continues to be a time of terrible cold for her, and now summer is a season of unbearable heat. But she is in Paris, free to roam and explore, to drift aimlessly and take in the city’s sights and sounds and smells, to scribble and throw her scribbles in a trunk to be retrieved later and perhaps made into something.

Her life goes from difficult to desperate, both financially and emotionally. An unexpected August relationship, begun when other friends were all out of town on vacation, blossoms and unaccountably dies, for reasons she will only learn much later. But throughout hardship and heartache, there is the life in her Paris neighborhood and in the streets and in the parks, and by the end of this second volume, along with an extremely challenging development in her life, Alberta has an epiphany.

And something dawned on her. All the pain, all the vain longing, all the disappointed hope, all the anxiety and privation, the sudden numbing blows that result in years going by before one understands what happened — all this was knowledge of life. Bitter and difficult, exhausting to live through, but the only way to knowledge of herself and others. … It was painful, but a kind of liberation all the same; a rent in my ignorance, a membrane split before my eyes.

Where will the third volume take Alberta, and what kind of life will she put together? The author left her home in Norway in 1905 and lived in Paris for 15 years. She married there in 1913 and had a son with her husband, a Swedish sculptor, from whom she was divorced in 1926. A Swedish citizen by marriage, she settled and lived the rest of her life in Sweden, first with a friend and then finally, at the age of 65, for the first time in an apartment of her own. Will Alberta’s years alone mirror those of Cora Sandel?

When Sandel’s novels appeared, critics acclaimed Alberta “one of the truly great characters in contemporary Scandinavian fiction,” and near the end of Alberta & Freedom there is the strong suggestion that Alberta is seeing a way to do with her “scraps” of writing what she tells her lover, a painter, what she would attempt on canvas if she were a visual artist, to paint life.

“I would put in people I knew, Alphonsine and Madame Boudarias and you, Sivert, painting artichokes.”

And so I will read Alberta Alone (not pictured above) before turning to The Bridal Wreath, which in turn will probably lead me into the second and third books of yet another fictional trilogy by a Norwegian woman author. It is only fitting, with so many Norwegian families having settled in and around Northport one hundred and more years ago. And what with winter coming on and all.... 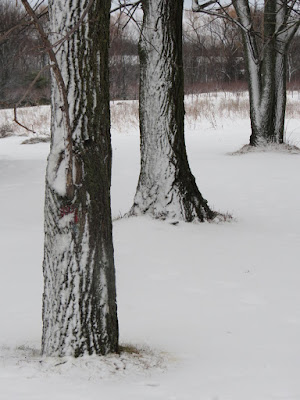 P.S., 11/9/17. I'm halfway through the final volume now, just past the passage where protagonist Alberta giddily realizes on the train back to Paris “...how much she loved travel for its own sake: the thump of the wheels, the changing, curving lines of the landscape, the furrow that seems to make a circular movement around you, arriving at strange places where everything is fresh and new as it only can be when you have never been there before and will not be staying long.” – Cora Sandel, ALBERTA ALONE


She's right about loving travel for it's own sake, at least for me. Always something new to see, even when I travel a road I've been on before.