My Muddled View of Current Events 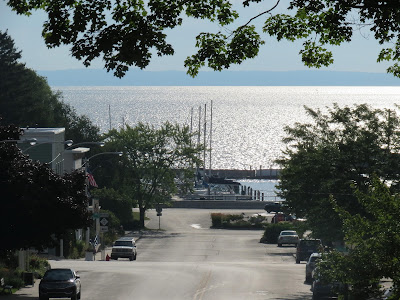 Wednesday started out early as "one of those days" -- beautiful morning with heavy dew (I went out barefoot to hang clothes on the line); horror statements emanating (again) from the White House; smiling friends’ faces on the streets of Northport; sad news that a Northport woman had died at Munson Medical Center in Traverse City; no long lines at Tom’s, where I went to buy a paper, but I’d forgotten it was 5% senior discount day and hadn’t gotten together a full shopping list; a man slipping into the bookstore before I was ready to open – I told him I’d be right back and ran next door to Deep’s, but found coffee pots empty; then a string of happy bookstore customers, including one woman who returned to tell me how much she loved Mr. Rochester – had about 80 pages left and needed to hurry back home to finish it! Up, down, the momentous and the trivial all mixed up. 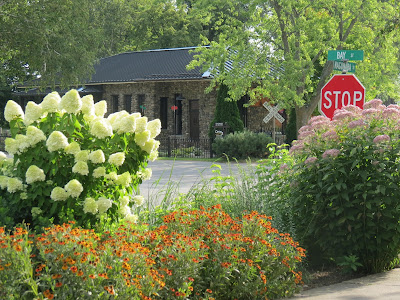 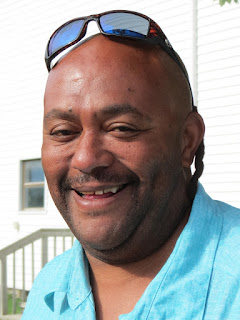 But I’m getting ahead of myself. After the usual morning errands, instead of sitting in the car by the harbor to read my newspaper ... or taking Sarah out somewhere north of town to escape village streets a while longer ... I decided to walk around with my camera (and dog) to look for happy sights. I needed some happy sights. One of the first I found was the smiling face of George Twine of Abundance Catering. George and I discussed the sad topics of death and politics -- how could we not? -- but were also mindful of our good fortune in being where we are, among familiar Northport friends.

Colorful blooms and blossoms everywhere in town, both nurtured and volunteering on their own, were worth stopping to admire. 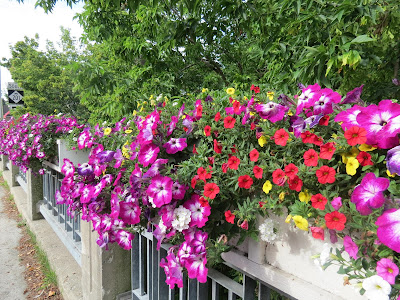 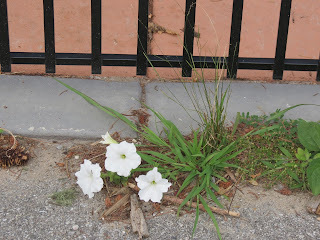 I would have photographed David Chrobak and his new dog, but his dog took exception to Sarah's presence, so we continued quickly on our way -- stopping, however, for an unexpected beauty down by the creek. Hushed, we stood quietly and watched. 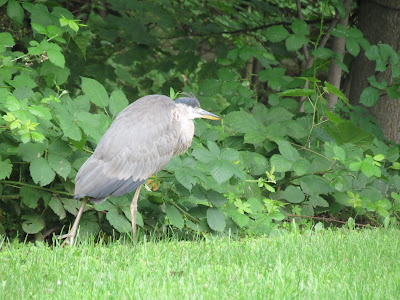 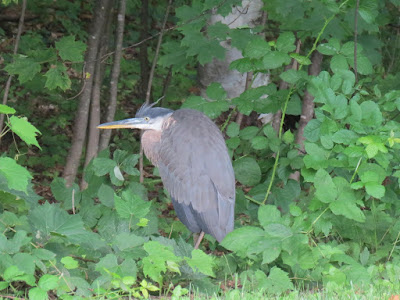 You can tell dog parade is past and the start of another school year coming on by glancing around at all the parking spaces on village streets. Even Tom’s parking lot on 5% senior discount day was not crowded. 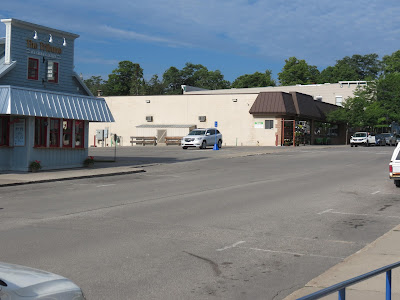 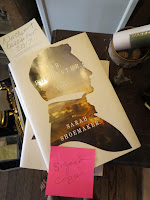 Author Sarah Shoemaker stopped in, and I wasted no time in handing her a signing pen. But why didn't I think to grab my camera and photograph her signing her book? Next time! (Sarah, be forewarned!) People are still coming in to tell me how much they love Sarah's novel. Sometimes someone takes a break to come in and talk about it, reluctant to reach the end. I know the feeling! 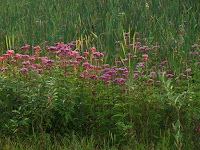 The other evening I finally settled down to reading something very different, a book by George Orwell I’d never read before and one I probably would not have appreciated in my younger days. In Homage to Catalonia, Orwell describes in detail (he must have kept a daily journal) his time in the Spanish Civil War, both how he felt at the time and how he looked back on the time afterward. There are also chapters in which he discusses the politics of the conflict, both the official versions put out by journalists far from the action and the very different reality he and friends confronted on the ground. The author advises readers not interested in politics to skip those chapters, but why would anyone not interested in politics be reading the book in the first place? Well, that’s my at-home reading, anyway, in the morning dark and before going to sleep.

...I had come to Spain with some notion of writing newspaper articles, but I had joined the militia almost immediately, because at that time and in that atmosphere it seemed the only conceivable thing to do. ... It was the first time that I had ever been in a town where the working class was in the saddle. ... There was much in it that I did not understand, in some ways I did not even like it, but I recognized it immediately as a state of affairs worth fighting for. Also I believed that things were as they appeared....

What Orwell initially believed he had found among the Catalans was a true classless society, a society of “complete social equality between all ranks,” even in military fighting units.

At the bookstore one day, during a quiet moment, I also got back to a book on Camus that had been buried in a tall stack. Albert Camus: The Artist in the Arena, by Emmet Parker, is one I need to start over again at the beginning, but opening to where I left my bookmark (Chapter 4, “Men of Justice; ‘To Err is Human...’”), I find the author focused on Camus and the French Resistance during the World War II, and the parallels to the case in Spain a decade earlier fascinate me.

Many in the Resistance, Camus included, looked on the end of the German Occupation as an opportunity for meaningful social revolution; as was the case in Spain in the 1930s, however, there was no cohesive organization uniting all the different groups known collectively as the Resistance. Another parallel was the war/revolution conundrum: Must revolution wait until the war was won, or could war and revolution go forward together? There was no general agreement on this question. Thirdly, in both 1930s Spain and in France following World War II, there was a strong sense that the Communist and Socialist parties “betrayed the revolution.”

In France, following the Liberation, the Socialists proposed bringing prewar leaders, including collaborators, into a new provisional government.

Camus categorically rejected this proposal. Acceptance of it, he was sure, would mean the return to an order characterized by cowardice, abdication of responsibility, conniving parliamentarians, and personal ambitions, an order that was merely [sic] disorder.

Not long ago I read a book called The Ambiguity of the American Revolution. Looking back on the American Revolution, the American Civil War, the Spanish Civil War, and the Nazi Occupation and Allied Lliberation of France, I can’t help but wonder where we are now, in our country, on the long arc of the universe. One of my favorite movie lines goes something like this: “God loves you just the way you are ... but he loves you too much to let you stay that way.” It’s easy to point the finger at people we judge to be worse than ourselves. But how can we be better? That is the question life poses to each one of us.

Are you dead certain or hopelessly confused? I am both. Pretty clear about the world I want to see but confused as to what I can do to move it in that direction. Give in to rage -- and escalate division and violence? Take the nonviolent high road -- and allow hate to flourish? Would the methods of Gandhi have been effective against Hitler? Did our Civil War resolve sectional animosity? Some of my friends come down 100% on one side or the other, either total warfare or absolute peace and love. Do I wish to see the matter that clearly, or would clarity only be oversimplification? 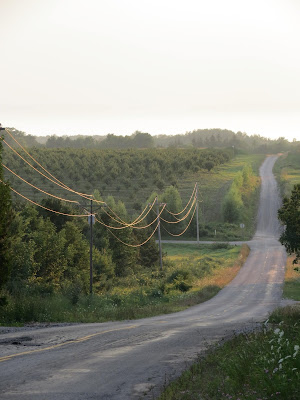 I live in a beautiful place, but I am part of the “real world” of hard work and anxiety and conflict, too, and there is no “path forward” laid out for any of us in advance. We can only do our best to carve one out. And then, sooner or later, whatever we do, the grass covers our bones, and the next generation takes its turn. That’s true, I know, but ... it doesn’t tell me what to do while I’m on this side of the grass.... 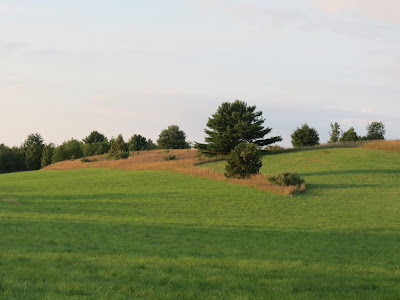 I reached the part about the favorite movie line and had to stop to comment - one of my favorite lines, which I also can't remember exactly, is "God loves you just the way you are but that doesn't mean he doesn't wish you'd try a little harder." It's said by a very pregnant wife to her immature husband. OK, now I have to go back and finish the post.

Gerry, I'm sure we're talking about the same movie -- young, pregnant, sweet, naive wife and bumbling, immature husband (more comfortable with workmates than family). I cannot remember the title, but I've seen it about three times. We'll have to follow up this quote and get it right.

One winter evening we can kick back with wine and snacks and watch it together. (Assuming we can identify it.)

After several digressions I've finished your post and have some other thoughts. I'm pretty sure true nonviolence does not allow hate to flourish. At the same time, I am not at all sure that anything but the massed armies of the western world could have stopped Hitler. I keep thinking about the powerful effect of "Have you no shame?" - and then ruefully admitting that the entire culture has coarsened to the point that, no, Sen. McCarthy would have no shame any more than today's demagogues have. No, the Civil War did not resolve sectional animosity, but it damn sure DID resolve the issue of whether one person could own another in these disunited states, and that, as they say, is not nothing. I am pretty busy working on finishing the job we started then, and it is very hard work. I am in NO mood to move backward. I find that it is harder for me to be brave than it is for me to be self-righteous, which leads to more work, mainly on myself. I hate that. I have no satisfying answers but I will tell you this: I am glad to be on this side of the grass along with you and a lot of other neighbors in this beautiful place while we keep working at it.

Finally, I have been reading Zayde Smith's Swing Time. She always makes my head hurt until I stop overthinking and just have the experience. All of this seems like part of the same thing.

Gerry, it's pretty rare to agree with any other individual on everything, but I can happily say that I am in agreement with everything you've written here in your comment above.

And -- TA-DA!!! -- the title of the movie in question is "Junebug"! Here is a wonderful review by the late Roger Ebert that makes me want to see this movie all over again -- for the 4th or 5th time!

That's the one! I will ask the Firefighter if I can borrow his movie night setup.