Our Busy Days and Nights

Wednesday evening, August 2, was the long-awaited reception for my husband, David Grath, at the Dennos Museum Center, where his one-man exhibition, “Three Decades of Landscape Painting,” will be up through September 9. And when the $5 million new addition is completed and opened in late fall, as planned (or surely, by the end of the year?), the permanent collections gallery will include one large David Grath painting. (Not the one pictured below, but turn left when you enter the gallery, and you'll see the one I mean. You see part of it above, over David's shoulder.)

It was a thrilling, memorable evening for us -- one we will never forget as long as we live. Owing to the many delays, pushing the reception back beyond the film festival to August, many of our friends had conflicts and could not attend, but enough people managed to get there to make a lovely, large crowd. To say that we had a “wonderful time” would be understating the case wildly. It seemed almost like a dream.

I must not neglect to mention Eugene Jenneman, director of the Dennos, and his wonderful staff; the magnificent caterers; and our own dear friend Dan Stewart, intrepid videographer of the evening. We are grateful to so many people for making this happen and joining us in a once-in-a-lifetime celebration of David's work!

The very next morning I came to Northport shortly after the crack of dawn to clean and organize myself, the bookstore, and the gallery for an evening author event. The big storm came during my 3-6 p.m. break at home, so I was able to get to the bookstore again to meet my guest author without dodging lightning bolts.

“It was a dark and stormy night,” indeed! The Leelanau Conservancy cancelled its 4-6 p.m. event in Leland, and a Northport woman called the bookstore to see if Gregory Nobles was still on for the evening. Yes, indeed, I told her. Some people arrived late, but eventually we had a respectable turnout for a lively evening of tales about John James Audubon. 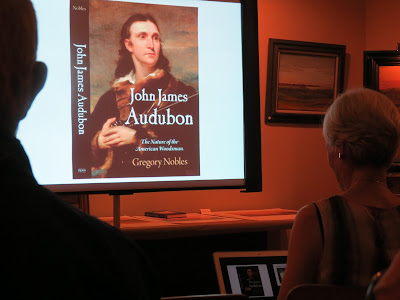 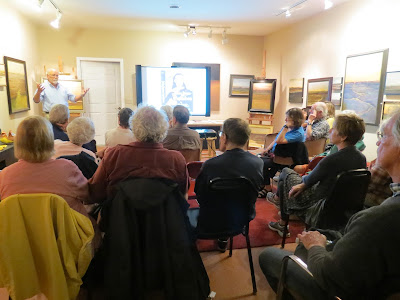 I had been struggling to put into words my general response to the book, which was that reading it was immersion in the America of two hundred years ago. Much more than merely a biography. Then as Greg began to explain the way Audubon placed each species of bird on the page of his huge elephant folios, picturing the species in its natural surroundings, I had a brainstorm: Just as Audubon put a species in its place, its own regional habitat, so Nobles puts Audubon in his cultural time in American history.

And again, many thanks are in order: to guest author Gregory Nobles; his wife, Anne Harper; to our new township librarian, Nellie, for loaning us A/V equipment for Greg's slide show; to my talented and overworked husband, artist David Grath, for setting up chairs in his gallery for the evening event; and to the intrepid audience who braved the elements to come to the bookstore, gladdening the hearts of author and bookseller alike. Great to have you all here!

Two major evenings successfully accomplished, I overslept a bit on Friday morning and had to hustle to get myself to Northport in time to shop at the weekly farm market, do my usual weekday morning errands, return borrowed A/V equipment to the township library, and open by 10 o’clock to accommodate a conversation between writers Sarah Shoemaker and Bronwyn Jones. It is a bookseller’s privilege to eavesdrop on visiting writers as well as being entertained by guest presenters. Sarah and Bronwyn will be presenting an event onstage at Kirkbride Hall in the Grand Traverse Commons at 7 p.m. on Thursday, August 10, so check that out if you’re in Traverse City.

David had to be in his gallery early today, also, meeting people who wanted to buy paintings. For one woman, buying a David Grath painting at last was a dream come true. Making dreams come true, seeing dreams come true, having our own dreams come true – even in the dizzying blur that is our busy summer, we are grateful for the richness of our wonderful life.

I'm so happy for you both! Sounds like a prefect couple of evenings!

Congratulations to both you and David, with thanks for all you do to enrich the literary and artistic community!

Thanks, Dawn and Barbara!