How to put the past week into words? September is in the air, a few leaves are turning and falling, and yet summer activities continue apace, each day filled to overflowing. Music in the Park tonight will feature the Hot Biscuits; Saturday night is the annual and always crowd-pleasing Sousa concert by the Northport Community Band; and Sunday afternoon will bring a parade through the village beginning at 2:30 p.m., with cake and ice cream and games afterward in Haserot Park, all to celebrate the 70th anniversary of the Leelanau Township Community Foundation.

The red-letter bookstore event of the week, of course, was the long-anticipated visit and presentation by Luisa Lang Owen, reading from her memoir, Casualty of War: A Childhood Remembered. Here (below) is Luisa at the bookstore immediately prior to her reading (1) and meeting an ardent local admirer (2). 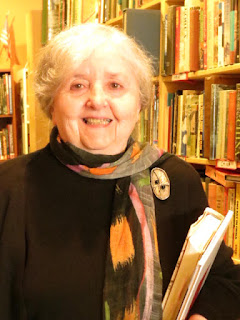 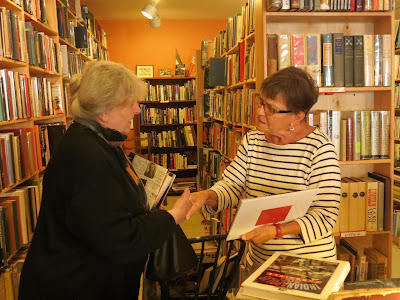 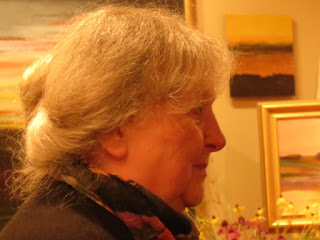 Then came the reading itself – and it was S.R.O., Standing Room Only, with a large, attentive, very engaged audience spilling over from the gallery into the studio and bookstore. There were many in the audience who had never before heard of the postwar concentration camps Tito's government put in place for Yugoslavia's ethnic Germans. Everyone was impressed not only by Luisa's vivid memories but also by her lack of hatred. "We are all connected" was her message, all part of each other. 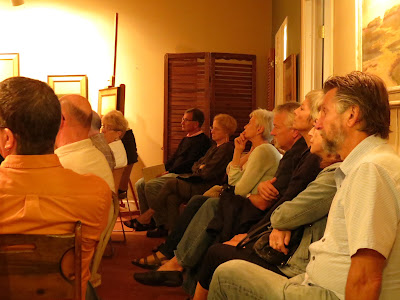 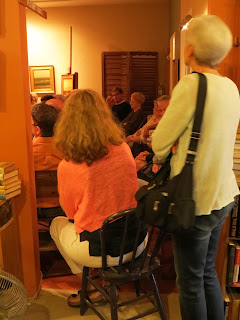 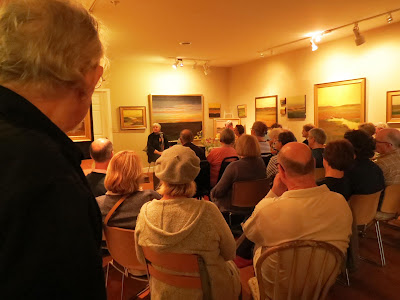 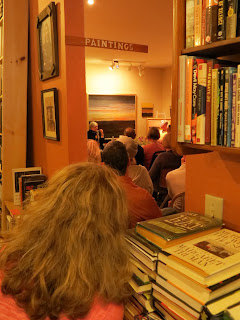 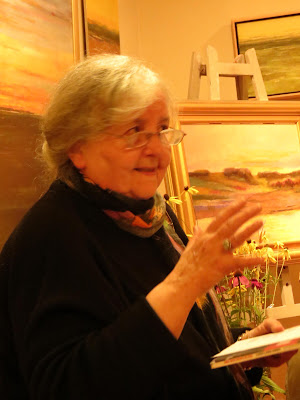 Most of us had time afterward for more conversation while Luisa signed books for eager customers – until we ran out of books, that is, and I had to start a waiting list! Then at last, around 10 o'clock, it was home by the light of the moon, as I planned an early Friday morning trip to the farmers market before another bookstore day, the beginning of our last August weekend, with the first September weekend bringing the Labor Day holiday, and in between this weekend and the next our final pre-Labor Day bookstore event, starring Steve Gilbreath and his sister and their great-grandfather's wartime journals. That's Thursday, September 3, 7 p.m., and again we will be set up in David Grath's gallery. 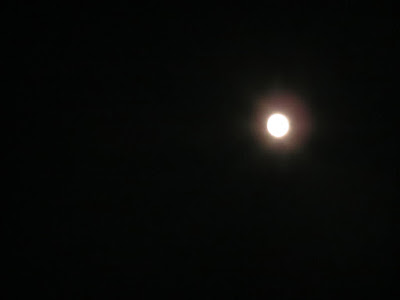 Great crowd! It sounded so interesting!

It certainly was, Dawn. One attendee e-mailed me the following day, "Her amazing story captivated and moved all of us.' Another wrote, "Thanks again to Luisa from an admirer." And I've had conversations with people in the bookstore and on the street saying what a fascinating evening it was. Wish you could have been with us!