Taking Time to Find Ourselves 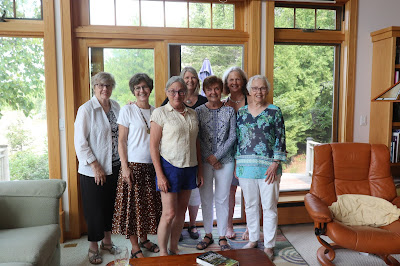 A Bookish Kind of Social Life

Since last I wrote, my sisters were here from Saturday evening to Tuesday morning, which meant that on my two days off (bookstore closed Sunday-Monday) I got to play at being on vacation with them. Summer vacation! What a concept!

Sunday Bettie and Deborah and I drove almost as far north on the peninsula as it’s possible to go in order to join a group of women fiction writers at the home of one of them for an annual lunch gathering -- lunch in this case lasting until 4:30 p.m. -- and a happy gathering it was, with progress reports, mutual encouragement, tales from all aspects from the book world, and gales of laughter interrupting the conversation to punctuate moments of hilarity. I was happy and proud to be able to introduce my sisters to this aspect of my wonderful world of books: these fabulous writing women! 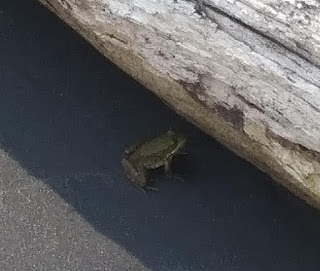 Monday the sibling trio went south, first to Lake Leelanau for a wine tasting on the porch of the Boathouse, overlooking the Lake Leelanau Narrows, a nice slow-down from my usual summer routine, and after wine and crackers and salmon spread  continuing south through Cedar and Maple City over to Good Harbor beach for a walk along the shore and to wade in Lake Michigan. We spotted this little frog hopping in the shade of an old log on the beach where we made our own temporary camp. My sisters enjoyed their Michigan getaway, brief though it was. 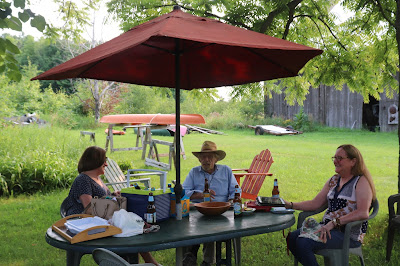 Tuesday evening the Artist and I caught up and reminisced with an old friend from Kalamazoo; Wednesday evening I mowed grass after supper; and on Thursday our reading circle (a.k.a. the intrepid Ulysses reading group) met to discuss Their Eyes Were Watching God, by Zora Neale Hurston, a novel everyone in the group loved so much that we pretty much stayed focused on it all evening without veering off onto more personal topics. We’ll take August off and reconvene in September to discuss The Waves, by Virginia Woolf, which you won’t be surprised to learn (if you read this blog regularly) was my recommendation.

Our hostess on Thursday evening shared with us, toward the end of our time together, that since the pandemic she has discovered her inner gardener for the first time. This came up in connection with what we had been discussing earlier about Janie gradually finding her voice and discovering herself. Someone speculated that Janie’s self-discovery might have been more difficult or perhaps even unattained had she had children, and that led (as I say, this was as we were wrapping up the evening) to our busy world and the importance of finding quiet time for ourselves.

My quiet time is often before sunrise, even long before the sky is light. Was it nothing more than serendipity that on Friday I picked up Anne Morrow Lindbergh’s classic little volume, A Gift From the Sea, to read with my pre-dawn morning coffee? It was certainly a delightful surprise to find the author quoting from The Waves in one of her chapters!

As calm and quiet and focused on Lindbergh’s words as I was Friday morning, though, I couldn’t help thinking of painful aspects of her life that preceded the 1955 publication of Gift From the Sea, the horrible nightmare kidnapping and murder of her first child and, following that, her famous husband’s antisemitism in the years leading up to World War II. Ann Lindbergh herself was also an isolationist and, at least early on, an admirer of Hitler. She says they were ''both very blind, especially in the beginning, to the worst evils of the Nazi system.” How horrible, to look back on having admired that! And she probably had more serious challenges in the everyday life of her marriage than her quiet meditations on shells suggest. There is a hint, when she quotes Rilke and then writes,

This is a beautiful image, but who can achieve it in actual life? Where has one seen such a marriage except in a poet’s correspondence?

Strange, then, to read the calm, reflective beach essay and feel the power of its quietness. Anne Morrow Lindbergh had five children after Charlie, and she lived to be 94 years old, so one wonders how many times she sought and found herself and if she found a succession of selves over the course of time.

He still has issues, and they are not trivial. He is affectionate and sweet with us but nervous and unpredictable with strangers, especially men. We have a new rule for him, which is that he cannot be under a table where we’re eating. He is good about limits, as long as we set them clearly.

Also on the plus side of the ledger is the way he doesn’t fight over having me handle his feet. I clipped five toenails at one sitting the other day and also clipped the long fur between his paw pads, giving him a much more respectable, cared-for look.

And Saturday morning's monsoon rain did a good job of filling up his wading pool for evening fun! 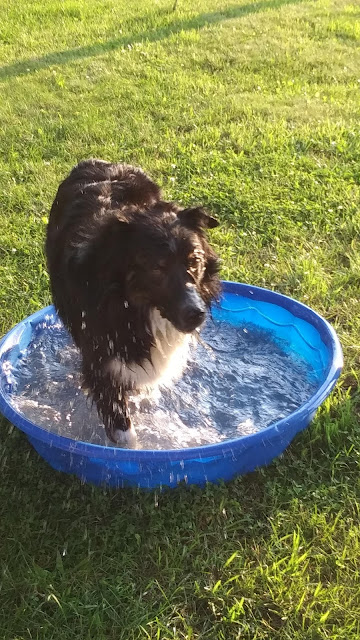 Yesterday and today we have company from Brooklyn, New York, and Sao Paulo, Brazil. That is, a husband and wife who divide their year between the two places. They are staying in Northport. This is a picture of Peasy before our company came. I'll need to take some photos of the company today, I see! 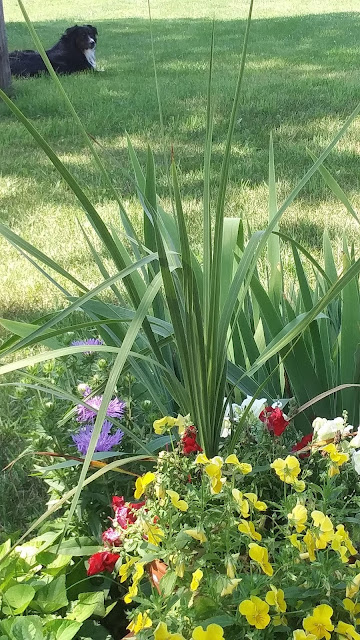 Following a long, leisurely cold luncheon at our place, we two couples separated for two or three hours and reconvened back at the Artist’s gallery, and after a long visit there over art and wine we walked down to the harbor. All the bar-restaurants in town were closed! Northport Pub and Grill, the Garage Bar and Grill, the Mitten Brewing Company! Paris, France, used to be like this in August, when the entire country went on vacation, and tourists from elsewhere found themselves with few resources to sustain life. Paris finally got its act together, and now the food purveyors stagger their vacations so that every neighborhood has something to offer, even during traditional vacation times. I think that would be a good idea for Northport.

Below is my "flight" from last Monday, a mix of whites, rose, and a red. I don't have photos of Northport's empty Sunday evening streets. It was just too weird! 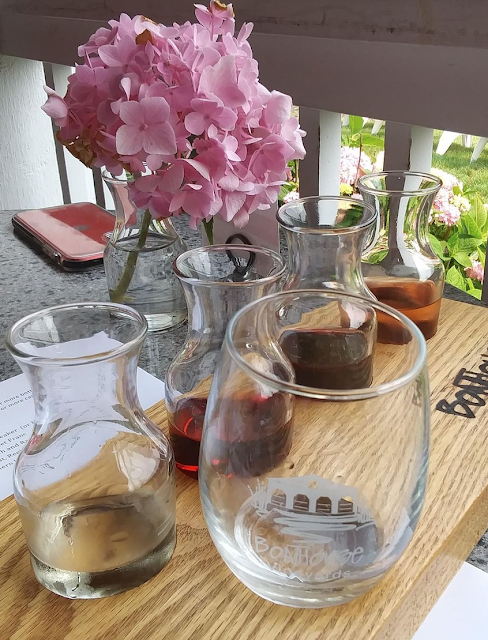 So many comments I had as I read, I probably won't remember them all. But I have to give Anne Morrow Lindbergh credit for recognizing that she supported something so evil. I don't think most people that still support the philosphies of Trump to ever admit that the man is scary and mentally ill.

I'm glad you had such wonderful days filled with great people doing fun stuff! And sisters too, that's just the best.

I'm also glad that Peasy is getting along as best he can with his issues. You are handling them so that everyone, people and dog, can exist together, and he's safe with you, so that makes me really happy. Also happy he has a pool! :)

I don't think I'm going to get up there this summer...so little summer left, and Katie is better when I'm at home with her, so I feel like I owe her that. Still...it's soooo beautiful up there... it's hard not to be there.

Enjoy the rest of your summmer, I hope it's a profitable one!

Dawn, I'm so sorry you won't make it up soon but completely understand your need to stay close to Katie. I am managing my "dog with issues" as well as I can, given that we don't have free time together all day for lessons. He really is a sweet, funny little guy, and he and the Artist are bonding, which makes me happy. Not an easy-Peasy, but the one we have. Summer? It is speeding by. There again, though, we are squeezing in time with family and friends. Ahhhhh....

Yes! Like Dawn, I had lots of thoughts as I read your comments. Your visit with your two sisters sounded just perfect, especially since you were able to have them meet a group of women fiction writers. What a wonderful time for your sisters to enjoy the company of such a creative group of women! You had a busy July! Then we two came along and loved every minute together - you ARE a good cook, and we enjoyed this short visit and hope that we will reconnect again, and sooner than years in the future. I’ll go to Greenlight Bookstore (2 locations!) soon and “visit” with you through the owner! Peasy’s pool looks like a cool, refreshing place in the August heat of the summer. He is so playful!

Jeanie, we so loved our July of family and old friends! xxxooo!!!