My Kind of Holiday (These Days) 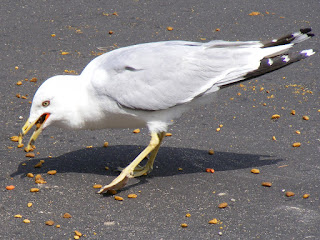 It was the 4th of July, with perfect weather. The president visited Traverse City and Antrim County, bought cherry pies at King Orchards and had chocolate chip ice cream in a waffle cone at Moomer’s. In Northport, after dark, there were fireworks, which some people loved and some hated. We Americans are human beings, after all, and is there anything humans ever agree on? 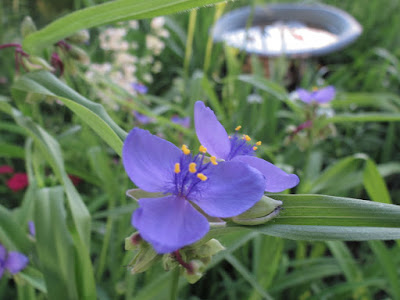 My bookstore is closed on Sundays and Mondays this year, as it was last, and July 4-5 were no exception. I stayed home. “It’s the height of the season!” the Artist exclaimed in astonishment when he asked my holiday plans. But nearing the close of my third decade in business, progressing through my eighth decade of life, I find days off essential to my wellbeing. I do some housework, mow some grass, fix meals, but I also play with my dog and lie around in the shade with a good book – as if (except for the mowing) I’ve rented a cottage and am on vacation for an hour here and there. 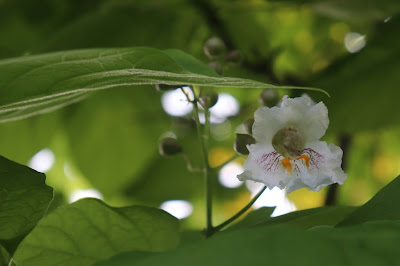 It is still early morning. The mist is on the marshes. The day is stark and stiff as a linen shroud. But it will soften; it will warm. At this hour, this still early hour, I think I am the field, I am the barn, I am the trees; mine are the flocks of birds, and this young hare who leaps, at the last moment when I step almost on him….

A friend mentioned this novel of Woolf’s to me when explaining decisions he made about the structure of his own book, and by sheer coincidence, the very next day, I found an old library copy in the annual Leelanau Township FOL book sale. My copy (this is irrelevant but interesting, I think) was withdrawn from circulation after its time in the University of London Extra-Mural Library, and it was the seventh printing (1953) of a book originally published in 1931, i.e., between the wars, as I always think of that period in Western history.

In The Waves are six characters who “speak,” although what we are given within pairs of quotation marks is not words uttered by one character to one another but rather that character’s private thoughts and impressions. The first scene opens with the six as children, each in turn telling what they see and hear in the country house world around them. As they age in the course of the novel (and we are given both their changes and their constancies, always through these interior speeches), somehow – this is Woolf’s genius – they take shape in our imaginations, and we recognize each of them and their relationships to one another and see them in their passing lives, singly and together.

Between sections of these inner thoughts, feelings, and impressions of the world, always progressing through the course of the characters’ lives as they age, are sections describing an ocean from sunrise to night, so that one day of the ocean and its waves parallels the passing decades of particular human lifetimes. An example from early in the book:

The sun rose higher. Blue waves, green waves swept a quick fan over the beach, circling the spike of sea-holly and leaving shallow pools of light here and there on the sand. A faint black rim was left behind them. The rocks which had been misty and soft hardened and were marked with red clefts.

All through the book, particular colors and sounds and shapes are named, so that the author’s fictional world is real and immediate in its details of sensation. Yet, immersed in it as I was, I was at the same time even more than usually aware of my own immediate surroundings – light through the basswood and black walnut leaves, shouts of color from my flowering boardwalk plantings, the dog lying nearby in the grass or pawing at the water in his wading pool to cool his paws, a bird swooping down through the branches, a wasp buzzing. And so, although I was lost in my book, I was not lost to the world around me. Following Susan and Bernard, Neville and Jinny, Rhoda and Louis through their days and years, I was all the more anchored in each moment of my own life. 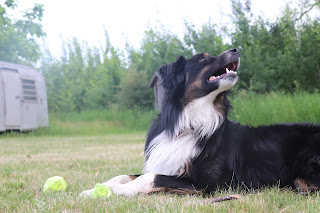 It was sheer magic and a wonderful holiday. 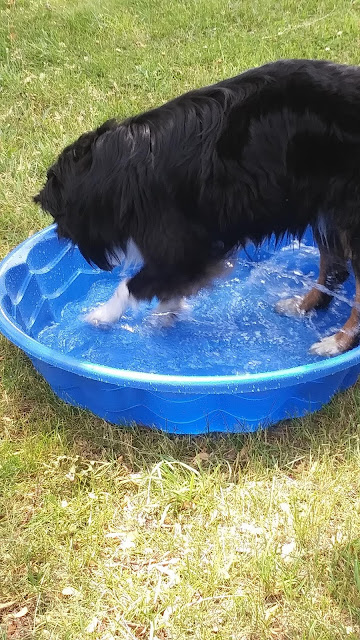 We went for ice cream again on Monday. Cherry amaretto in a waffle cone for me, butter pecan in a regular cone for the Artist. I saved the last bite of cone for Peasy, as I always used to do for Sarah. And then he repaid me by table-surfing after dinner and eating a whole stick of butter. First time for that naughty behavior! Time out!

But another friend is dying, and that is dreadful. The Artist and I each make sure the other buckles the seatbelt. “Don’t do that. You’re too tired right now. You need to rest.” Anyway, however much we do, wherever we look we see more that needs to be done, but last night we threw up our hands and said, “Who cares?” It won’t all get done, and that’s that. 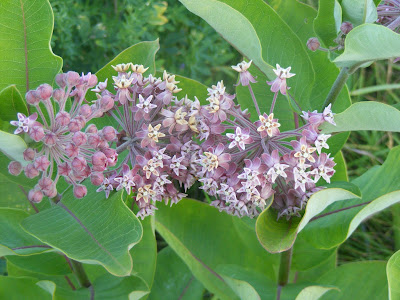 This morning I picked up a book I’d started reading who-knows how long ago, Herman E. Daly’s Steady-State Economics. Picking up the house, clearing surfaces, dusting, the Artist and I were making stacks of things to put away or de-acquisition, and this book was in one of my stacks, but this morning, as I say, I opened it and decide to start reading again at the beginning. Second paragraph of the preface to the first edition begins with a clear statement of the scope of his argument:

The antithesis of the steady-state economy is the growth economy, which is still defended by a large majority of economists and politicians.

Further down in that paragraph comes clarification of the author’s method:

…Controversy is most enlightening when dealing with the specific views of specific people. Hence I have named names and cited works, rather than argued against an unspecified aggregate “progrowth critic,” who could easily turn into a straw man. It would be easy to lump divergent progrowth arguments into one conglomerate and then expose this composite position to criticism and to ridicule the inconsistencies that naturally result when different positions are merged and treated as if the merger had been the product of a single mind. Leaving individuals anonymous usually passes for scholarly abhorrence of polemics. More often, the merciful anonymity granted toward one’s soon-to-be vanquished adversary is nothing but a lazy preference for debating mute straw men rather than real people. Therefore, I hope that my disagreements with specific spokesmen of economic orthodoxy will not be thought of as ad hominem attacks or as implying any disrespect for the specific individuals cited as standard economics.

I see by the Post-It notes flowering from page edges that when I last laid this book down I had reached page 103. As the issues seem among the most important for the future of the earth, I’ll get back to you in a while on my progress through all 285 pages.

Economics is a lot more than accounting, and anyone claiming interest in politics without interest in politics is, to my mind, simply an idealogue. What are the foreseeable consequences of specific ideas put into practice? That is the crucial question. Because long after we are gone, life will go on for others. 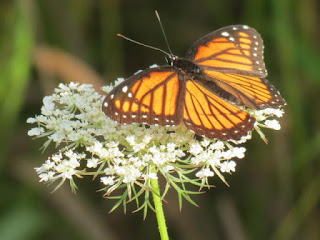 So appreciated your analysis of VW's "The Waves." Few writers do interiority like she does, and I suspect it has to do not just with what she's describing, but the actual rhythm of the sentences--which may be why you have a heightened sense of your own world while reading hers. Maybe it's the rhythm of our breaths when we are truly conscious of our connections--as she seems to have been, at least on the page. Thank you! Anne-Marie

Anne-Marie, I so appreciate your comment. I agree that there is something both hypnotic and sense-opening about her rhythm. What I don't understand is why this book is so little known. I have seen it somewhere described as her "most experimental" work, but it is certainly not so experimental as to be incomprehensible. Although I floundered somewhat in my reading of early pages, it flowed along beautifully once I adjusted to her rhythms and began to see the characters in their settings. I would love to see this book make a come-back. I would even put it in my top 100 of the 20th century -- if I had put such a list together....