Of Little Girls and Cocktails, of Dogs and Hotels 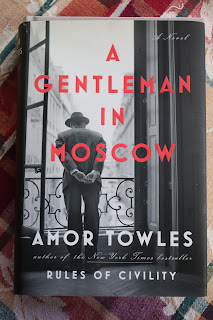 With my first cup of Saturday morning coffee, I finished the last few chapters of A Gentleman in Moscow, by Amor Towles, a runaway bestseller when it was published in 2016. I have yet to read the author’s first novel, another bestseller, Rules of Civility, so how the two may compare I will not be able to say. As for A Gentleman in Moscow, the impression I had early in my reading of the novel remained with me to the last page. It is this: that although Count Rostov carries out a complicated plan for the story’s dramatic finale (actually, two plans -- one for himself, another for Sofia), the real main character of the book is the hotel.

The Hotel Metropole, in the heart of Moscow, “was a residence hotel par excellence, an oasis for the worn and weary.” In June of 1922 [June – the very month in which I am reading the novel] Count Alexander Ilyich Rostov, who grew up on a country estate called Idlehour in Nizhny Novgorod and who has been residing at the Hotel Metropole for almost four years, is declared by the authorities to be a Former Person and sentenced to permanent house arrest at the hotel. If he is caught setting foot outside the door, he will be shot. The only reason he is allowed to live at all is because of a poem published under his name, a poem for which he is still regarded as a hero of the pre-revolutionary cause by certain high-ranking Party members. While under house arrest, Rostov, with an intrepid little girl in a yellow dress as his guide, manages to invade every nook and cranny, from cellar to attic, a Former Person spying on others much more than anyone ever spies on him, and as he explores the hotel the reader is introduced to it in loving detail.

That hotel! It is a whole world! Rooms, suites, restaurants, bar, ballroom, barbershop, florist. Rather than being obviously part of Moscow between the two world Wars, the Metropole seems to exist not in Russia at all, perhaps not even on earth, but in a land of fantasy, with its continuous, smooth-running operations, elaborate menu offerings, and seemingly inexhaustible cellar of fine wines. Another realm altogether!

In the novel the years 1929 and 1930 come and go without desperation or even any serious scarcity visiting the hotel, and from the beginning political horrors are so muted as to seem very distant and abstract. Intelligence, quick thinking, urbane wit, and instances of timely good luck dispel danger and conquer petty annoyances.

[It has been interesting to read this book in the time of coronavirus and protest demonstrations, while we are self-quarantining at home for 14 days after a harrowing five-day drive across the country. Self-quarantine is hardly equivalent to house arrest, but there are some similarities, the most obvious being the constraints on movement. But also, I must admit, a sense of safety and almost luxury in isolation, very like what the Count enjoyed at the Hotel Metropole. It is hardly prison, after all, being confined to one’s home with plenty to eat and, in our case, honeysuckle and apple trees in bloom.]

How, though, I keep wondering, is the count paying for all those meals and all those bottles of wine? Surely he was not producing one gold coin after another from the hidden compartment sin the legs of his grandmother’s tea table! That would have brought the authorities down on him instantly to demand the source of the coins! So what is he doing for money? In real, historic Moscow, such a question would have to be asked and answered. In a fantasy hotel, it does not arise.

[The Artist and I, on the other hand, are very aware of financial resources, bills to be paid, provisions to be purchased, and limitations on what we can spend, with future income so uncertain.]

“Where did they go?” she asked, without a word of introduction.

“I beg your pardon. Where did who go?”


She tilted her head to take a closer look at his face.

The Count had not much cause to interact with children, but he had been raised well enough to know that a child should not idly approach a stranger, should not interrupt him in the middle of a meal, and certainly should not ask him questions about his physical appearance. Was the minding of one’s own business no longer a subject taught in schools?

[At home, at the moment, I have both the burdens and the luxury of isolation. Luxury, because I was not ready on Monday morning, the first of June, to re-open my bookstore or to answer again and again the curious questions of friends and strangers. “Were you gone for the winter?” “Where did you go?” “How long were you gone?” “What do you do out there?” “How was the trip back?” “Are you glad to be home?” One person at a time I can handle. Thinking of more, I feel overwhelmed. Because ever since early March, when businesses closed across the country and shelter-in-place orders came down, we have all been living in some kind of alternate reality, riding an emotional rollercoaster in limbo, separated from one another by much more than 2,000 miles.]

First comes Nina, a child. Then Anna, a beautiful woman. Later, Sofia, Nina’s child who gradually becomes his own. (And finally?)

Besides these, the Count becomes a member of "the Triumvirate" when he joins the ranks of hotel employees as headwaiter, responsible for careful seating arrangements to ensure frictionless dining in the hotel’s premier restaurant. In a word, he has close friends and important relationships, although he can meet his friends only within the confines of the hotel.

[I have seen three friends since our return. With one the conversation was conducted with my car between us on the street. Another visit took place in my yard, with the friend in his car while I stood at a distance. A third visitor came onto our front porch, but we sat so far apart that we often had to repeat parts of the conversation that the other had missed hearing.]

And now, permit me to leave the more important aspects of the novel for a tangent. Willowy Anna, the actress, first appears at the Metropole with two borzois on leashes. The dogs do not play a large role in the story as it continues – theirs is but a cameo appearance – but these lines jumped out at me:

You may accuse a dog of eating without grace or of exhibiting a misplaced enthusiasm for the tossing of sticks, but you may never accuse one of giving up hope.

The hope of the borzois in the passage quoted is that they may have a chance (they do not) of catching the one-eyed cat.

[Our dog, Sarah, was with us all winter and spring and traveled twice across the country in a very small space in the back seat of our small car, with never a complaint. When one motel clerk would have turned us away, saying they did not accept dogs, the Artist said simply, “We can’t live without her,” and she was allowed to share our room. She has impeccable motel manners, by the way: never a bark, never an accident. Sometimes we think about dogs that spend their days chained or fenced without companionship of any kind. How does a dog survive that kind of isolation? I contend that the dog’s undying hope is what gets it through each day, the possibility that at any moment life might change for the better. But how can a dog bring about change? Its repertoire and opportunities are dreadfully limited.]

We human beings are more fortunate than dogs in the exercise of our free will and self-determination. What we imagine and desire we can often bring about.

And that’s where I want to leave you today, with a suggestion author Amor Towles gives us from the movie “Casablanca,” that

… in setting upright the cocktail glass in the aftermath of the commotion, didn’t [Rick] also exhibit an essential faith that by the smallest of one’s actions one can restore some sense of order to the world?