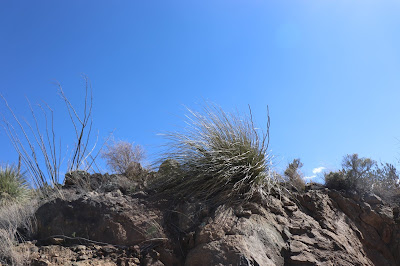 It was now late afternoon and the sun had passed over the far side of the long cut. The rocks in the pass rose almost perpendicularly on either side of the narrow trail; several of the boulders seemed to be far off balance, past the point where they should fall off and roll down into the pass. It was not late but early afternoon as our party of four approached Apache Pass on Wednesday, as we had set out from Dos Cabezas right after lunch, and the road to old Fort Bowie is not many miles past our winter ghost town cabin. I’d spent time that morning with Elliott Arnold’s novel, a fictionalized account of regional history, with much background and detail focused on Cochise, chief of the Chiricahua Apaches during the period covered in the novel, and Tom Jeffords, who eventually became the Indian agent for the Chiricahuas following a treaty made between Cochise and General O. O. Howard. A few sentences stray into New Mexico from time to time, but most of the encounters and incidents in the book take place between the Dragoon Mountains and the Chiricahua range, my winter stomping grounds.

In December, 1858, Cochise received an invitation from the station agent at the Apache Pass depot to bring his entire tribe to the station, with its newly completed store, to receive presents as a gesture of good will from the Butterfield [Stage] people, who had by then on numerous occasions felt the power of the friendly hand of the Chiricahua chief.

Cochise had realized that his people could not survive forever if they continued to war against the ever-increasing number of whites pouring through Apacheria, so he had promised safe passage to the Butterfield stages, and he kept his promise. He even went so far as to punish Apaches from other groups who trespassed on his territory and violated his agreement with the whites. Cochise made these choices for the good of his people. For a while most of the whites were content merely to pass through on their way to California; even then, however, all was not well for the people of Cochise, and it much became worse as the numbers of whites increased and not all were transients.

… While most continued on their way to California, many were settling in the great valleys. Whether they remained or moved on, their passage was a noisy one. Their transit was emptying the countryside of game far more rapidly than Cochise had thought possible. Ranchers and farmers appropriated water holes and caused the game animals who used to come to those holes to move elsewhere.


Within the space of months the numbers of deer and elk diminished speedily…. The mountain sheep found new summits to roam. There had been wild turkey, not in great amounts, but enough to fill the larder of the Indians who hunted silently and did not cause entire flocks of birds to fly away over noisy gunfire.

Eventually — and it did not take long —

The deer and the elk were gone, and without them there was nothing to provide the shirts and trousers, the hip-moccasins. There was grain from the government store, but there was no fresh meat.

A few of the Apaches had look around and had found some more of the yellow nuggets and had got white men’s clothing in exchange. But the clothing was designed for the cattlemen and farmers in the lowlands and offered little protection against the cold [of the mountains]. Besides, no Chiricahua Apache, no matter how much he tried, could accustom himself to white man’s shoes.

Chiricahua women repaired moccasins as well and for as long as possible, but without the deer and elk both clothing and sustenance were harder and harder to come by. Would the situation have been less dire if it hadn’t been for gold fever? It made no sense to the Apaches, how silly and excited and childish the whites became over gold. It could not be eaten, and the metal was too soft to be used to make tools or weapons.

… The Americans lost the dignity of their manhood when they saw the yellow iron. They gushed and became effusive and uncovered their emotions as no Indian ever would under any circumstances. They had no restraint.

Ironic, I can’t help thinking, the coincidence of sound between the English words gold and greed.

We all know how it ends. The story of Cochise and Tom Jeffords is told in books and movies, embellished fiction and straight nonfiction, and I’ve made mention of it before in other posts. Besides, the general story was repeated from New England to California as the “manifest destiny” of the young United States was achieved. Cochise was fortunate enough to die a natural death in his beloved mountains, but after his death, the fate of his tribe took a turn for the worse. Americans in barrooms and Congress, living rooms and offices, argued the relative merits of competing policies regarding Native Americans — concentration vs. extermination — but in practice, both policies were pursued. The Apache chapter of American expansion eventually culminated in the removal of all “hostiles” from southeast Arizona, including women and children and the very Apache scouts who had fought with the U.S. Army, to concentration camps in Florida. According to the government’s story, these Apaches were prisoners-of-war. Even the women and children? Even the scouts who had been their own fellow soldiers? For shame! 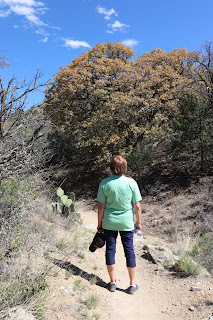 My sister had not been eager to hike the 1.5-mile trail from the trailhead parking lot to the old fort ruins, where we would meet our husbands, but she did it for me, and I was grateful — all the more so when we came upon points of interest long before we reached the old fort. The most moving to me, for some reason, was not any of the old building sites but Apache Springs itself. Water is life. I had not imagined we would see the spring, coming upon it after our trail skirted high ground above another surprise, a deep, wooded canyon.

Wherever on the earth one occurs, there is something holy about a spring. I felt as pilgrims must feel when visiting the grotto where St. Theresa is supposed to have had a vision of the Virgin Mary, gods and ghosts all around me.

While the women had been hiking the trail, the men had been exploring the remains of the old fort. After a rendez-vous and some modest purchases at the visitor center, we retraced our steps by vehicle and went “around the block” — the long one — down along the mountains and around to the Mustang Mall and back up the Kansas Settlement Road for supper at the cabin. If we could see a composite picture of all our party’s thoughts and impressions after the day’s expedition, two white American men and two white American women, all born in the mid-20th century and doing our best to adjust to the 21st, what would be revealed? Nothing simple, I’m sure of that.

Thanks for reading, Valerie -- and for letting me know you did. It was an incredibly moving experience, knowing the story.

Your post about Cochise left a sadness in me to think of what he, his Chiricahua people and all Native Americans went through as their land and livelihood was taken from them. Thank you for telling us about him and about your experiences in the same exact places where he was.

Jeanie, I don't know if you heard some of the stories of voter suppression on reservations. If a state demands a physical address with street name and house number, many people with reservation residences have no way to comply. Polling places distant from reservations are also a problem. The difficulties are not all in the past, and that's even sadder. https://www.washingtonpost.com/news/monkey-cage/wp/2018/10/18/what-keeps-native-americans-from-voting-and-what-could-change-this/?utm_term=.66d21e8804ec