How Are Things in Stinking Creek?

Election Day — both long anticipated and long dreaded. It will be so good to have the landscape cleared of campaign signs, won’t it? However things turn out, we have all (I trust!) done our civic duty. Not that it’s “over,” by any means. The work goes on. But at least we can put this decisive aspect of it behind us for a while.

Both the day before and the day of voting, I did what I had to do but also found time to immers myself in other worlds, that of Thomas Mann’s The Magic Mountain, seeking some organization for themes and corresponding page numbers before our reading circle gets together on Wednesday, and also re-reading a little sociological treatise (from back when sociology was qualitative, i.e., interesting, rather than quantitative, i.e., boring), namely, Stinking Creek: The Portrait of a Small Mountain Community in Appalachia, by John Fetterman. Stinking Creek the book (the place is in Kentucky, and it’s a real place) was first published in 1970, the author having copyrighted it in 1967, so descriptions of people and place are outdated, but you know I am hardly averse to slipping the bonds of time, especially in times of mental crisis (see first paragraph of this post). 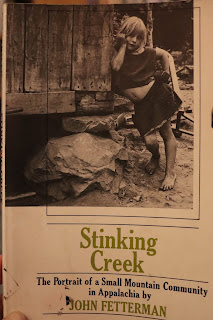 There were several things I noted in the Appalachia of the 1960s. People had lost jobs in the coal mine already back then — not because coal wasn’t being mined. The locals hadn’t lost their jobs to immigrants providing cheaper labor or to newer alternative energy sources, either. No, it was machinery doing the work previously done by men. Bulldozers, power shovels, augers. “Automation has made the miner jobless.” Lumbering jobs were nearly nonexistent by the 1960s, too, because good timber had all been removed. Living off the land was no longer possible, either, as creeks in which fish had formerly been plentiful were now so polluted by acid from old coal mines that even traditional baptizing holes had been abandoned. With trees gone and soil washing away comes also flooding — yet another hardship for those at the bottom of life’s heap.

To reach the coal seams now, a bulldozer strips the earth from the seam…. Power shovels scoop up the coal that lies exposed. Augers … bore into the mountain to bring out the remainder of the seam….
The resulting tons of waste — earth, slate, and slag — are hurled over the mountainside in an orgy of monstrous ruin. Sulfur, associated with coal-bearing formations, enters the streams, and a solution of sulfuric acid results. This silt washes down the mountainsides to fill the stream beds, and during heavy rains the valleys act as huge funnels, hurling the unchecked waters along to inundate town after town.


Timber, fish, game gone, along with mining jobs and logging jobs — their homes periodically flooded out — nothing was as good as it had been for the earliest settlers. “‘There ain’t even a crawdad around here,’ an old-timer observed.” There were jobs in Cincinnati, Chicago, and Detroit, but who wanted to leave the freedom and quiet of the mountains for noisy, expensive, hemmed-in city life? Stinking Creek folk much preferred to stay where they were, if they possibly could. 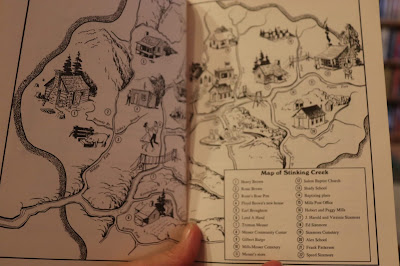 Distrustful of the “govmint” as most of them were, those disabled by accident or illness were happy to “draw” welfare checks and receive free “commodities” — and let’s remember that those free commodities were as much subsidies to overproducing farmers as they were benefit to the hungry poor, something people who rail against “handouts” often forget — while the chance of “project work” gave hope to young men, hope that they could stay on the mountain and get paying work, rather than having either to leave home or stay and “draw” [welfare checks].

Farming had never been a path to prosperity in this hard, rocky country of thin, poor soil, but in the 1960s most families still had their own garden plots and raised corn, beans, tomatoes and such for their families, while those who could afford to keep a cow had fresh milk. The boys hanging out at Ellis Messner’s store drank much more “pop” than a dietician would recommend, and boys and girls both took to chewing tobacco at a young age. There was, however, no “opioid crisis” back then. Church attendance might not be regular among all residents of the various hollows, but religion had a hold on many, nonetheless, and even adolescents who quit school before the eighth grade showed respect for their elders, Fetterman observed. Although there was almost nothing in the way of recreation for young people, Fetterman says this of the community where he spent time getting to know the inhabitants one by one and family by family:

On Stinking Creek there are no muggings, robberies, stabbings, rapes. Yet every boy carries a pocket knife — not as a weapon, but as a symbol of responsible manhood. On Stinking Creek you can leave your car unlocked with its load of cameras, typewriter, and personal belongings without fear. Where else can you do this?

This is certainly not the Appalachia one encounters in recent books. It was poor then, too, most families living in two rooms, the young not all that optimistic, and yet —?

What makes the difference between then and now? Not unemployment, my liberal friends, because jobs had already been long lost. Nor welfare, my conservative friends, because they already had that, too. Intrusion from the outside world, however, was still minimal: Television sets were just reaching Stinking Creek but were not in every home, and the one fuzzy channel pulled in would not have brought anything like the mayhem available on cable today. Moonshine could be a tempting danger, but it wasn’t cheap, and international pharmaceutical companies had not yet realized what a lucrative, captive market the poor could be. Degraded popular culture and aggressive marketing? You tell me.

Thinking now of the dusty road in front of my grandmother’s little house outside Springfield, Ohio — barefoot children, lack of indoor plumbing, but neighborly, with plenty of room and freedom for those barefoot children at play — I realize my grandmother’s neighborhood was a suburban version of Stinking Creek. Some of her neighbors might even have come from those very Kentucky hollows. There was a kind of dignity to poverty in those times, in those places. If such exists yet today, it must be where the poor are fortunate enough not to be victims of addiction or famine or war.

One final note from Stinking Creek in the Sixties, relevant this week when Americans are going to the polls once again: Though many were illiterate and almost no one trusted politicians, residents of Stinking Creek were still eager to vote. On the fourth Tuesday in May, the author tells us, there was no school, because the school building served that day as the polling place for the Sixth Precinct.

The crowds came early. They stood on a rocky point up on the road and looked solemnly down at the ancient school; they gathered in knots in the few shady places down by the creek and stared up at the school…
…Democrats and Republicans alike were determined that the fiasco of four years ago would not be repeated. In that earlier election, Democrats were elected, then unseated after a court battle. It all came about over a Kentucky law that decrees that voters who cannot read and who require assistance to flip the levers of the voting machine must sign an oath that “by inability to read English … he is unable to vote without assistance.”

In that election four years before, half of all Stinking Creek voters had been assisted, and 68 of them had “signed” the oath only with an X. And because their precinct could turn the entire county one way or another, on this fateful Tuesday evryone is watching Stinking Creek. And Stinking Creek people knew they were being watched.

Voter after voter cautiously approached the door, as though fully expecting to be turned away. Every eye was on that door, and each voter came out into the blazing glare of the sun and the more penetrating glare of his fellow citizens. And each voter shielded his own reactions from this intense scrutiny with an expressionless mask he draws over his face at such times.


The linking of the ability to read and the right to vote is an annoyance of great proportion to the people of Stinking Creek. The ability to read has little to do with a man’s ability to fell a tree, move a stone, or decide whom he wants to dabble in the public funds as his duly elected servant.

Over the past year, 2018, gerrymandering (on the ballot in Michigan) and accusations of voter suppression have been big topics across the United States. What faith even those skeptical, suspicious Appalachian voters had to have to get out and cast their votes! For most of us today it is so easy! Most, that is, not all, and the attempts to make voting more difficult for whole blocks of Americans is nothing short of shameful. But we keep trying to figure out this democratic process, and God forbid we should ever stop trying!

And now, back to The Magic Mountain I go. 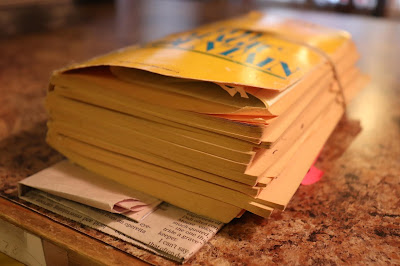 P.S. the day after drafting post: Election results are mostly in by now, and the only thing I’ll say here is that in Leelanau County 65% of eligible voters cast votes in this election. Sadly, 65% is considered a “massive” turnout. Too many Americans are still all too prone to take rights and freedoms for granted or think one person can’t possibly make a difference, when the truth is that every election (leaving out presidential races and the Electoral College) is won and lost by an aggregate of individual votes. So whether your preferred candidates won or lost in this midterm, f you voted yesterday — or earlier — you counted.