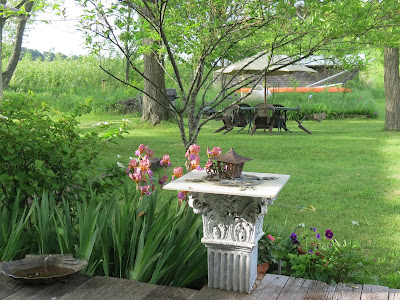 Summer is a challenge for me, for us, every year. What is more lovely than a day in June — and how often does the grass in June need mowing! Home, yard, and bookstore:  each could use full-time attention and care. But even if I were three people for those jobs, there is no point in living somewhere beautiful and not taking time to soak in its beauty, no point in living surrounded by books and not taking time to read.

The Artist shares some of my challenges and has a few others of his own. Sarah is neither job or diversion. She is simply Constant Companion, an integral part of our lives, always there, making few demands, providing endless comfort to us both. 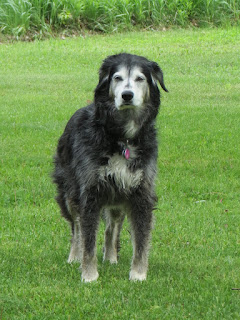 Oh, loveliness of dog and books! We humans in the house, even when worn out by long days of work, sometimes find it difficult to sleep, minds chewing over tasks still undone. That’s when I get out of bed and into a book, escaping into someone else's world for a while. And so, overwhelmed recently (can one be “somewhat overwhelmed,” or is that an oxymoron?) by the rising tide of summer’s demands, I turned once again to Ellen Airgood’s South of Superior, reading it through for the fifth time. It’s good to visit that little Upper Peninsula town and spend time with my old friends there as they deal with the challenges in their lives — although these days I identify as much or more with old Gladys than with 35-year-old Madeline!

No, I’m nowhere near Gladys’s age yet (85) but edging closer to her as the distance increases between me and thirty-five, Gladys and Madeline always 85 and 35, while I continue to age. But fictional Madeline has her challenges, and Gladys has hers, and so do Paul and Randi and little Greyson and everyone else in McAllaster, Michigan, on the shore of Lake Superior. By the time I reach the last page, most of the various characters have come to some kind of peace, but those who have learned the deeper lessons have also the sure knowledge that their peacefulness and ease is only a temporary resting place. More troubles will come and will have to be faced. More joys will also come. Life, that is, will continue to be interesting, always. Contented in a moment of ice-fishing, Madeline’s eyes on the dipping, quivering bobber, she “watched in anticipation for what would happen next.”

And that’s it. Moments of peacefulness. Summer or winter, spring or fall, out on the ice waiting for fish to bite or hanging laundry on the line in bright sunshine or walking in the northern woods or southwestern desert with a dog or sitting outdoors with friends at the end of a long, beautiful day. Carpe diem! Or, as we used to say in Leland (and as other people down the road there doubtless still say), “Seize the carp!”

When I woke at 3 a.m. the following night, I took Alexander McCall Smith’s Mma Ramotswe as my companion. In The Woman Who Walked in Sunshine, Mma Ramotswe takes a holiday from work and at first, finding herself at loose ends, she begins to speculate about how a black mamba snake might get into her kitchen and where it might hide.

In my case, “never” would be an exaggeration, but “not for quite a while” would not. Should that task be undertaken today? Sigh! Must I?

Mma Ramotswe tidies her cupboard and then decides to meet friends for tea. That occasion is not a great success (too much gossip), but in the hotel parking lot, she encounters a small boy in need of rescue, a young boy living in the backyard of a woman who drinks and beats him and steals the coins he brings home from “watching” people’s cars for them in the parking lot. Such a person must not be allowed to victimize the boy further, and Mma Ramotswe is soon on her trail. The bad woman’s house, Mma Ramotswe discovers, was not well maintained, and

…the yard was ill kempt, which spoke volumes, as it always did. If you did not keep your yard in reasonable order, then your whole life would be similarly untidy. A messy yard told Mama Ramotswe everything she needed to know about its owner.

Instantly I feel better! While Bruce was at the bookstore on Friday and I could have been tidying my cupboards (or cleaning out closets or scrubbing floors or washing windows), instead I had been out in the meadow, waging my annual war on autumn olive. I’ll never eradicate it — it is taking over the entire neighborhood, any and all bits of land that are not regularly tilled or mowed — but holding it at bay for as long as I’m here is important to me, and looking out now at the expanse cleared of its unwelcome presence gives me great satisfaction. The job isn’t finished, but another day or two should take care of it until next spring.

I avoided another opportunity for housework by watering my straw bale garden and weeding and mowing grass in our outdoor dining area and around the straw bales. Our yard is not messy! Well, it has its cluttered corners (mostly in and around the old, dilapidated barns), but the general appearance is neat and welcoming and colorful with pots of flowers, and I would not be ashamed to have Mma Ramotswe drop by. I think she would focus on the bright, well-tended areas and understand that one woman — even one man and one woman, at our ages — cannot do everything we once did. 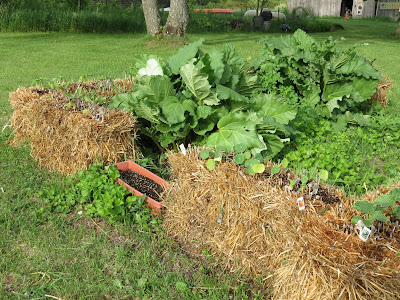 After rescuing the little boy and installing him in a safer, more congenial living arrangement at her friend Mma Potokwane’s Orphan Farm, Mma Ramotswe sings aloud as she drives her tiny white van back to town. She has met a challenge, it’s a beautiful day, and no matter if people in other cars think she is a lunatic, Mma Ramotswe is happy, and she will sing!

It was not a big change in the overall scale of things; it was not something that would be noted by more than a handful of people — at the most — but it was something to be pleased with, even to sing about.

I was happy to have the rest of the book to look forward to later, after morning housework and time spent with friends in the afternoon and before a full day of errands in town on Monday.

Sometimes making a “mistake” means a day turns out better. I distinctly heard Sarah Shoemaker say that her letter to the New York Times Book Review would appear in the June 17 issue, so why did I rush down to Lake Leelanau as soon as NJ’s opened on Sunday morning, expecting to read Sarah’s letter on June 10? Well, am I glad for having jumped the gun in this case, for the sake of the book review section, because under the headline “Underrated and Unappreciated” was a review of a new book about President Jimmy Carter, a book the reviewer calls “a measured and compelling account,” one that considers Carter’s weaknesses along with his strengths.

The author of President Carter: The White House Years, Stuart Eizenstat, and the book reviewer, Peter Baker, both seem to share my own view, which is that Jimmy Carter’s presidency has never been properly evaluated. Instead, policies that might very well have led us to a much better world than we find ourselves occupying today were largely undercut by the tone of his message. President Carter’s unflinching honesty compelled him to deliver bad news, hoping America would see its errors and change its ways, but it was the stick, not the carrot, a call to sacrifice, not “You can do it!” optimism. And so, while almost everyone admires him for his post-presidential work, his accomplishments in the White House are generally forgotten. Now comes President Carter: The White House Years from St. Martin’s Press to correct the national memory. It’s about time.

When President Carter’s energy report came out in the 1970s, I was working in a university office concerned with environmental issues and so had a chance to leaf through that weighty tome in our office library. Before that, while I’d voted for him, I hadn’t been excited by Carter’s presidency. That energy report changed my attitude. I was excited by his ideas for energy independence, even if it meant higher gas and oil prices during a transition, and I began paying closer attention to everything he said and did. When he arranged a Middle East Peace Conference at Camp David, I hoped to see conflict permanently resolved in Israel. In general, I noticed with nothing short of amazement that when President Carter gave a press conference, he actually tried to answer the questions asked rather than wiggle out of answering! Incredible! 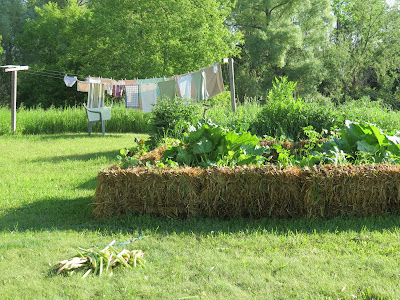 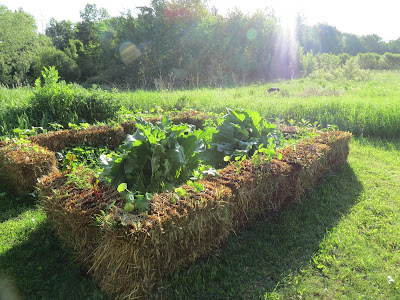 Despite the unsettled weather an east wind always brings, Sunday was a lovely day. It brought work, and it brought friends. And at day’s end, tired and happy, I took up again The Woman Who Walked in Sunshine.

Normally Mma Ramotswe would be up first and make tea for her still somnolent husband. This she would place on the dresser at the side of the bed before going out into the garden to inspect the plants, savour the crisp morning air, and watch the sun float up over the horizon.

In our house, it is coffee rather than tea in the morning, and Mma Ramotswe has no dog, but otherwise the morning routine in the novel pretty closely mirrors my own. (See above.) Another morning, another day. But first, the restfulness of a sweet, green June evening. 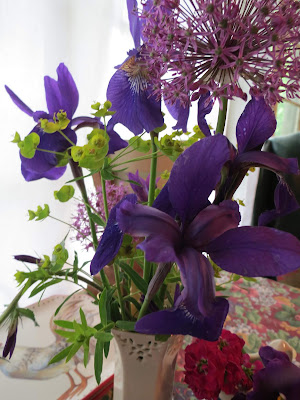 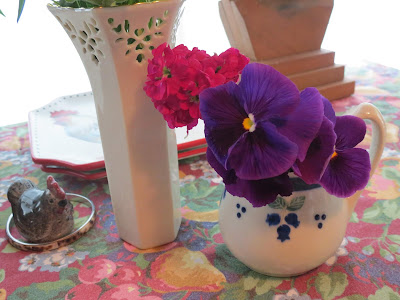