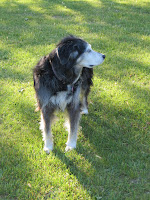 I’m talking to myself. Yes, I often talk to myself, though sometimes under the pretense of talking to the dog, which somehow is not seen as quite so eccentric, although a bookseller, as I told my mother once, is supposed to be eccentric, especially a bookseller whose shop specializes in used books, so since the stereotype already exists, I might as well play it to my advantage. “What will people think?” They’ll think I fit the stereotype, of course. That I’m typical. — Or is ‘typical eccentric’ anything a contradiction in terms? Well, there I go, down a rabbit hole of pointless digression, but so what? It’s early morning … or was when I began writing this, hours and hours ago.

On the morning after my first TEA event — Thursday Evening Authors, my summer literary series celebrating 25 years of Dog Ears Books — while in the backyard watering my straw bale garden in the early sunlight, with birds singing their hearts out all around me, I told myself, Take a deep breath. You’re here now. That is my mantra: You’re here now. Or, more prescriptively, Be here now. Summer is a busy time, but it’s important to stop and look around and listen to the birds and take those deep breaths.

The First Dog Ears Books TEA of the Season

Next Thursday (all Thursday events begin at 7 p.m.) is poet and essayist Fleda Brown, and on July 5 we’ll have travel writer Kim Schneider, and we’ll just keep going on from there, all through July and August.

I had to miss a discussion with friends Wednesday evening on the poetry of Emily Dickinson and ask forgiveness of the woman who would have been my hostess for the evening. But now, how many of my readers are Dickinson readers and/or fans? Some of her poems are well known and quite simple, but I was surprised (not ever having been an “English major”) by how difficult I found many of the unfamiliar pieces. A couple incomplete, random notions on the subject of her work are bouncing around in my head, though, and here they are:

One friend e-mailed me last week or so that she needed a break from Emily, that there was just too much death and mourning in the poems, and there is a lot, which led me to thinking that death, always a major topic for poets, was particularly so in the 19th century. It was the poetic fashion, one might say. For example, one of my mother’s favorite poems was William Cullen Bryant’s “Thanatopsis,” written when the poet was only 17 years old. “So live, that when thy summons comes to join/The innumerable caravan which moves/To that mysterious realm where each shall take/His chamber in the silent halls of death….” Read the entire poem and see what you think of it. Is it depressing? Morbid? It doesn’t seem so to me. Rather, immersion in nature, along with thoughts of life’s brevity and death’s inevitability, seem both prescriptive and consolatory. And I see the same themes working out in Emily Dickinson’s poetry. People in that age lived closer to death on a daily basis than most Americans do today. We keep it at arm's length. But maybe we are the ones who have the morbid attitude?

My other thought — and this might be a bit far out — is that many of Dickinson’s poems remind me of the literary riddles so popular among the educated classes in the 18th and 19th centuries -- not the simple question riddles but those in the form of verse. In truth however, it is my compulsive re-reading of Jane Austen that brought the riddle idea to my mind when reading Dickinson. In Jane Austen’s Emma, one of the plot lines rests in part on the collection of “charades” that Emma encourages her young protegée, Harriet Smith, to put together. Could some of Emily Dickinson’s poems be riddles? Or is this a very naive and unliterary question to ask?

Anyway, I quite like all the flowers and bees in Emily’s poems. Lots of bees! Full of life, bees and flowers.

And now, Saturday morning, time to take to the road but also, I'm happy to realize, sufficient time to take the slow back roads to town, on my way to errands and another day in my bookstore. The world is lush and green and overflowing with life and death. It is a plenitude. We're here now. And today -- tonight -- is St. John's Eve. 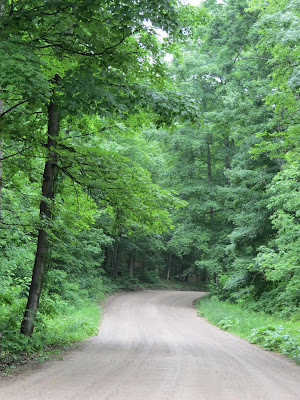