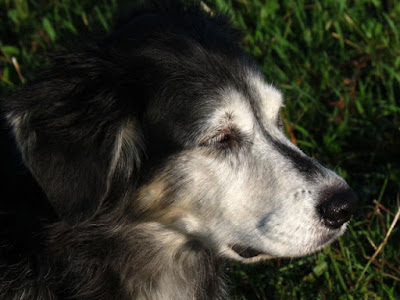 Margo was more certain about the dog than she was about the house, which sounded like a fairy tale. Maybe she felt as much certainty about Nightmare as Luanne felt when she packed her bags and finally left Murrayville to make a new life. Maybe it was what Joanna felt when she swore at her wedding to honor and obey her husband, to forsake all others. Maybe when Smoke headed down that hill toward the river to drown he was as certain as Margo was about this dog.
- Bonnie Jo Campbell, Once Upon a River

Quite a while ago I read about half of a very interesting book on dog health and then managed to mislay the book for several weeks. Other reading intervened, as did some travel to other counties in Michigan. Then one day something slid off my desk, and in retrieving it I found once again my copy of Pukka’s Promise: The Quest for Longer-Lived Dogs, by Ted Kerasote, author of Merle’s Door.

As all dog-lovers are only too aware, the heartbreak of loving a dog is that their lives, in general, are much shorter than ours. This is hardly new information, but the author of Pukka’s Promise, looking into every aspect of canine longevity and the causes that hold it back and reporting primary researchers’ findings, writes that the situation is worse than we thought. Life span information generally given for specific breeds is often overly optimistic. Official life spans quoted to the public generally exceed actual averages achieved.

Dr. Kelly M. Cassidy of the Conner Vertebrate Museum at Washing State University is an important source, and Kerasote gives several examples of her findings.

Take German Shepherds. If you do an Internet search for “German Shepherd life span,” you will find many hits that push the average life span of the breed to thirteen years. But the breeder surveys that Cassidy averaged show a life span of a little under ten years. - Ted Kerasote, Pukka’s Promise

[All subsequent quotes will be from the Kerasote book.]

So, 13 years or only 10 at the outside for German Shepherds? How about American Cocker Spaniels: 12-15 years or closer to 10.7? Boston Terriers: 13-15 or more like 11? Whatever the truth and whatever the reason for any specific breed average, should dogs in the United States live longer than they do? And what can any dog owner do to extend, healthily, a beloved pet’s life?

These are Kerasote’s general concerns. His specific, personal concern, not surprisingly, is to ensure a long, healthy life for his next dog, having lost his beloved Merle at the age of 14. The new dog turns out to be Pukka, a Labrador Retriever puppy Kerasote locates in Minnesota. Looking for, finding, and bonding with Pukka is a whole story in itself, woven into a fascinating trail of factual information on general dog health.

A general chapter on animal life spans (“The Clocks of Danger”) sets the stage for later chapters, and an early chapter on breeding is instructive but not terribly surprising for anyone who has glimpsed the world of purebred dogs. Those German Shepherds in the quote above, averaging lives of under a decade, are not the German Shepherds of your grandfather’s generation. The “makeover” of the breed, beginning in the 1950s, drastically lowered the hindquarters, producing dogs with

The show standard for Pekingese and Pug dogs also underwent serious changes over time. The faces of Pugs and Pekingese were bred to become flatter and flatter, deforming the canine snout and giving rise to breathing and overheating problems. And yet the breed clubs recommend surgery to correct the problems, rather than admitting the fault to be in breed standards.

Here I will not resist a brief personal digression. When we found our mixed-breed Sarah at the Cherryland Humane Society in Traverse City, I turned to the Internet to read about Border Collies and Australian Shepherds and was incensed by one site in particular, one where anyone could pose a question, and the “best” answer was determined by responding “votes.” Someone had written in for advice on buying an Aussie-Border hybrid, and the answer voted “best” advised that no one should ever buy a hybrid puppy, because it was an indication of either careless or irresponsible breeding (or both) and would encourage puppy mills. As if purebred puppies never come out of puppy mills? As if purebred breeders would not logically outnumber professional breeders of hybrid pups? Take a look at the prices! On what fantasy planet is this Internet public living?

In Pukka’s Promise, the American Kennel Club comes in for particularly sharp criticism, and you might guess, given our Sarah’s background, that I read the following paragraph with heightened interest:

In 1991 and 1994 the AKC recognized the Australian Shepherd and then the Border Collie as official show breeds, over the objections of both breed clubs [my emphasis added]. Members of these parent clubs repeatedly told AKC leaders that Aussies and Border Collies had no need for a show-ring standard since they were herding dogs whose most salient quality was performance, not appearance [my emphasis]. Their wishes were ignored, and the AKC went so far as to pressure breeders to get its way, telling them that their dogs would be barred from competing in AKC performance events if they continued to resist the creation of a show-ring standard. The reason behind these strong-arm tactics was money—the AKC makes about half its revenues from registrations.

That’s the bad news, but there is some good news to be found in the story of the United Kennel Club, founded in 1898 in Kalamazoo, Michigan. From its inception, the UKC has emphasized fitness over looks and recently began gaining registration while AKC registrations declined, due to a 2012 announcement that the UKC was revising all breed standards in accordance with optimum dog health. Healthy dogs! Kalamazoo! That news made me cheer on two counts!

So yes, the health of purebred dogs in the last half-century or more has had a lot to do with less-than-optimal breed standards and with breeding dogs too closely within genetic lines of inheritance, but breeding, though important, is only one factor to be considered in a dog’s health and life span.

Kerasote looks deeply into the matter of diet, both quantity and quality. In one study of Labrador Retrievers, dogs were divided into two groups, with “one member of each pair ... fed 75 percent of what its sibling was given.” After fourteen years, when all the dogs in the study had died, the “dogs who ate their fill” had had a median life span of 11.2 years, the dogs on the restricted diet 13 years. The "full-diet" eaters had also developed osteoarthritis at a much higher rate: in the hips, 52 percent, as compared with 13 percent of the dogs on the restricted diet; in shoulders and elbows, a 77 percent (full diet) to 10 percent (restricted diet) difference. Overeating is bad for dogs. They are more likely to get sicker and die younger. Surprised?

What a dog should eat is another and much more complicated story. The story of corn as animal feed in the U.S., of course, is not limited to dogs. Once again, it’s a question of following the money: promotion of corn-based commercial dog food, company give-aways to veterinary schools, very limited scientific “research” conducted by commercial concerns and limited to results favorable to their market shares. More objective research points to low-carbohydrate diets as more healthy for dogs. Not only carbs but preservatives, artificial coloring, and pesticide residue are issues to consider. Raw food? What kind, and from what source? How about fresh, leafy green vegetables? The author's presentation is as long on detail as my hints here are sketchy.

One might be forgiven for assuming that regular vaccinations and neutering would have no effect one way or another on a dog’s health or how long the dog lives, but Kerasote does not make that easy assumption. (He questions everything.) Purdue University and Banfield Pet Hospital staff, looking at medical records of 1.2 million dogs, discovered a rash of adverse reactions to vaccinations, with smaller dogs and neutered dogs showing higher incidences of problems.

But who wants to take the greater risk of rabies or distemper?

Baker observed that about one-third of all pupples who had been vaccinated and achieved immunity subsequently lost that immunity within twelve months. Their immunity was determined by a blood test that measured antibodies and was called a “titer.”

Baker went on to suggest that “two procedures are possible to help prevent disease.” The first was to titer dogs every year so as “to check their level of immunity.” Those who had lost their immunity could be revaccinated. “Or,” as Baker went on to write, “an alternate procedure would be to vaccinate all dogs annually.”

Baker’s final recommendation was the second of the two alternatives he had put forth, with the result that, as Kerasote puts it, “the principle of annual vaccination became enshrined,” despite the fact that distemper vaccines generally provide immunity for 9 to 15 years, parvovirus vaccine for seven years, and rabies vaccine for seven years. [In this regard, Leelanau County dogs are better off than dogs in municipalities requiring annual vaccinations: every three years satisfies the county licensing requirement.]

Spayed and neutered dogs not only have a greater risk of adverse reactions to vaccines but may also be at greater risk for obesity and certain kinds of cancer. Vasectomies and tubal ligations would accomplish the same goal, i.e., population control, so why are these procedures so rare? Well, veterinary medicine is medicine, and medicine is a conservative field, and this seems to be the best answer available.

The author visited dog breeders and veterinarians, animal hospitals, animal cancer centers, animal shelters, and plants that recycle animal carcasses. What you have read in this post barely scratches the surface of what you will find in Ted Kerasote’s book. Every dog owner and every person considering becoming a dog owner should read Pukka’s Promise from cover to cover. Also, many issues of dog health pertain to human health, and these facts will leap out at every reader.

Finally, in recommending it, I can tell you that this book ends happily. You’ll like that, too! 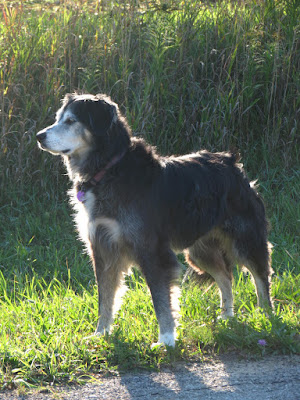