“Sir and Madam, What Are Your Intentions?” 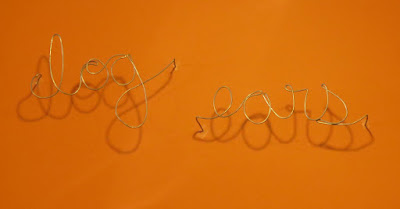 But everything is a double-edged sword, and we can never entirely separate the good we intend from the undesired negative consequences of our actions. Do or don’t. Do this or do that. Either way, there’s no free lunch. The question is the quality of the lunch, the benefits derived from it, and the cost to be paid, not only at lunchtime by those choosing the meal but by everyone else for years to come. 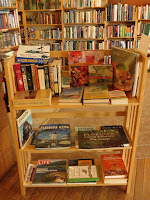 No one is ever surprised that independent booksellers and publishers (clinging to always-precarious marginal livelihoods) have little good to say about the online behemoth dominating book sales. Internet book purchases had risen gradually over the years and then seemingly evened out -- maybe, we thought, leaving a margin of survivability for the rest of us – and then came the shopping season that wasn’t. It came out of nowhere, a fatal tsunami of absence – empty streets, empty sidealks, empty stores. And bookstores were not the only retail stores hit. So it is hardly surprising that we in storefront retail don’t love the behemoth who threatens our self-interest so drastically.

The figures about loss of jobs surprise no one, either: that news has been around for a long time now, as has the wisdom that a dollar spent in a local community tends to go around there many times, whereas the one sent elsewhere rarely comes back. But if it isn’t your store or your job, why shouldn’t you save as much money as possible with the greatest convenience to yourself? Maybe you don't identify all that closely with the community in which you live. Anyway, should bookstore owners expect to be subsidized by the public, just so they can go on living in their precious, rarified little literary worlds?

Grow up, softies! Re-invent yourselves!

Come on, admit it. Haven’t you sometimes wanted to say something like that to the bookseller in your neighborhood, the one insisting that he or she is your “local bookseller,” whether or not you ever cross the store threshold? Local, schmocal, yokel, right? 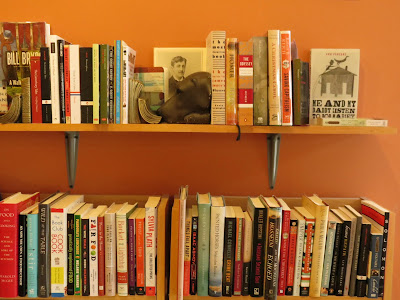 Well, now some interesting new figures are coming to light, having to do with much more than local stores and jobs disappearing. We are learning that there is also a much larger volume of waste material generated by in the packing and shipping of online purchases.

Surprised? And that's not all.

Another negative consequence most people don’t think about an increased number of trucks on the nation’s highway – and what those trucks are carrying and implications for the trucking industry, transportation legislation, and highway safety. One of my downstate blogging friends lost her father to a highway accident caused by a trucker who fell asleep at the wheel. She works with a group called the Truck Safety Coalition, and here is her take in her own words:

The [New York Times] article expresses some of our concerns over truck safety: "One recent study explored the environmental effect of Internet shopping in Newark, Del., and found that a rise in e-commerce in recent years by local residents corresponded to more trucks on the road and an increase in greenhouse emissions." One of many problems created by consumers needing instant gratification is that there ARE more trucks on the road...and these trucks are often carrying lots of smaller boxes (v.s. shipping to a store many of one thing) so now truck companies want larger trucks (because they are full using the typical sized trailers, but not at the max weight yet.). So...we are fighting more trucks, and the requests for bigger trucks.

The original Times article focused on growing mountains of shipping containers and packing materials, but my friend’s concern is hardly less serious, I’m sure you will agree. 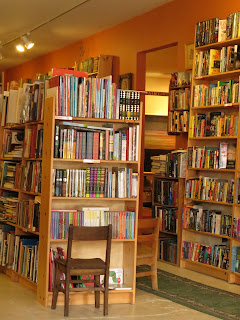 Recap: Because online shoppers expect and demand the fastest delivery possible of their purchases, greater numbers of smaller packages are in transit, translating to mean containers and more packing materials – in short, more waste generated. At the same time, paradoxically, trucks delivering all these little packages are not carrying their maximum weight, resulting in more trucks on the roads, plus pressure on and from the trucking industry to allow bigger trucks than the law currently permits.

Taken together, increased waste and decreased safety are powerful arguments for supporting local bookstores and other retail establishments where you live – not only for the sake of store owners and employees, but for the sake of the world we will leave to our children and grandchildren. This information needs to reach a wider audience, because I know that book people care about the broader social and natural world. And the fact that the information supports my own personal life choices doesn't make me sad, either. I need not blush for owning a bookshop. Not that I ever did.

The things I love most about my not-so-local local bookshop are the excellent company, the readings by authors I'd never encounter elsewhere, and the wonderful books I'd never know about if you hadn't pointed me in their direction. Esther Forbes's Rainbow on the Road is a fine example. Dog Ears is an experience, not an errand.

Thanks, Gerry. It really is a decision we have to make over and over, isn't it? And I love that you love RAINBOW ON THE ROAD as much as I do!