A Book, a Stone, the Weather, and Another Book 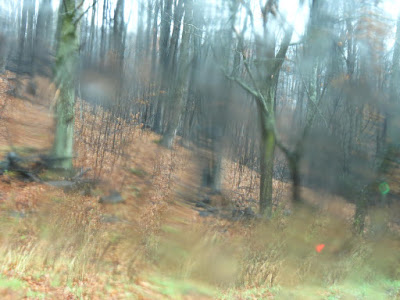 Predicted gale-force winds moved in on schedule late Thursday, whipping Lake Michigan up into a roaring monster, but we did not have the damaging, tree-dropping wind speeds that some downstate areas experienced, nor did we suffer (yet! fingers crossed!) power outages. Sarah and I managed our morning walks on Friday – first near home, followed by a north-of-town expedition -- in a spitting rain, cold and kind of nasty but not heavy enough to warrant the annoyance of carrying an umbrella.

Wet, windy weather is supposed to keep up through Saturday, but Sunday and Monday (my “weekend”) we should have calmer, warmer days. And while the NOAA forecast talked about two inches of snow accumulation on Saturday, the predicted high of 40 degrees makes me doubt we’ll see much snow on the ground. Not for long, anyway. Up in the 50s on Sunday? Good for wrapping up the last little bits of yard work around the old farmhouse.

On that north-of-town walk Friday morning, I had my head down most of the time, partly to keep wet rain out of my face but also because the unpaved road, for some reason, seemed to have a lot of enticing stones lying on the surface. My attention to them was rewarded when I’d about given up hope. The markings on this hexagonaria were as clear as if it had just been tumbled in the surf, several miles away.

Mary Gaitskill’s most recent novel really deserves a post all its own, but I want to post, not postpone, my response to the novel, so here goes:

You don’t have to be horse-crazy to love The Mare, you don’t have to love children to fall in love with the girl called Velvet, and you don’t need to have experienced firsthand either the painful yearning of childlessness or the struggles of a single parent in poverty to feel for both Ginger and Silvia as they negotiate through trial and error their own challenges and their separate efforts to do what’s best for Velvet. Come to this novel from whatever experience you have, and the author will take you to new places. Another voice in the book is Paul, Ginger's husband, but femaleness is in the foreground, from Velvet's urban school to the stable next door to Paul and Ginger's suburban home.

Gaitskill’s story is told from the perspectives of various characters – primarily through the experiences, thoughts and emotions of Ginger, Paul, Velvet, and Silvia – as these shift through time and through their interactions with each other, with minor characters, and in the various worlds they inhabit and visit. “It it a YA novel?” David asked. No, I told him, not at all. “Well, is it a coming-of-age story?” Well, partly, and it’s been called that, but I find it much more. Each character is living through multiple story lines and trying to find the path forward.

Nothing is simple. Numerous critics cite the author’s awareness of emotional complexity, of characters with so many emotions they overflow. Although Gaitskill has always been called “unsentimental," at least one reviewer found this new novel overly tame. Readers will decide for themselves. Reviewers, after all, are only readers whose opinions are published, so it is not surprising that their opinions will vary and sometimes conflict. Here’s an excerpt from a review by Hannah Tennant-Moore that better expressed what I found in the novel:

In The Mare, Gaitskill writes of race, parenting, early adolescence, and horses with the same tender complexity that marked her earlier work on sex and relationships. The book is written from inside the minds of its main characters. The perspective changes frequently, sometimes from one paragraph to the next. Together, these overlapping inner monologues offer a full portrait of the visible and invisible factors at play in each scene.

I loved this book. I loved it for its complexity, its eschewing of easy answers, the way the author avoided both pat solutions and the tragic outcomes any reader cannot help but fear its characters will meet. I wonder, do we think that only fiction plunging its characters into fullblown tragedy is “realistic” or “serious”? Because I loved this book also for its redemptive moments, the kind that life really does offer from time to time but that literary novels so often withhold. The picture-perfect “photo finish,” after all, is not the end of the book. That is the climax, yes, but it is followed by a much more nuanced and less simple denouement, with many hurdles yet to come for all the characters. Is that not realistic? Life is never "over" at the end of a book, as long as the author has not killed off all the characters.

Finally – and this is not a particularly literary note – I loved this book especially (my friends will not be surprised to hear) for the very important role played by horses in the story. I’ve had more than enough of books with beautiful horses on the covers and only a few scant paragraphs, if that, where horses appear inside. Fugly Girl isn’t a beautiful horse, either. Her name tells you that, right? But Velvet sees the horse, and the mare sees her, and the two develop a bond. In fact, it’s amazing that someone without a horsy background, as I believe I read about Mary Gaitskill, was able to make the horse environment and horse-human bond come so beautifully and quiveringly alive.

Ferocity. The ferocity of a mare, of a strong woman, the ferocity that shy outsiders must find inside themselves if they are going to find an independent path forward in life. Never before have I encountered a novel that gave me, in combination, the difficult modern realism of Bonnie Jo Campbell and the heart-soaring magic of Walter Farley.

As I say, you don’t have to love horses to read this book, as I hope all of my blog readers will. It's on my order for books I'll have by next week.

P.S. I see I did no plot synopsis for this book. You could follow one of the links to another review and get it, but here's mine:

A childless married couple, Ginger and Paul, sponsor an inner-city child at their home for two weeks in the summer, and following the official two weeks, Ginger, unable to lose the girl's presence, arranges for her to continue visiting and to return on weekends after school starts. There is a riding stable next door, where the girl, Velvet, falls in love with a dangerous, abused mare. The stable houses an interesting cast of characters (besides the horses), one of whom is Pat, the manager, who gives Velvet riding lessons in exchange for work. Ginger is jealous of the real mother, Silvia; Silvia -- a Dominican immigrant and single mother -- afraid for her daughter's safety; and Paul, feeling neglected, falls into an affair with a graduate student; while Velvet's life is complicated by the onset of puberty and new feelings towards boys, as well as the hurtful shifts of girl alliances. Does Ginger really love Velvet? Is she helping or hurting the girl? Helping or hurting her marriage to Paul? Is Silvia an abusive parent? What is her relationship to her young son, and why does she seem to love him so much more than her daughter? Will Velvet be destroyed in a tug-of-war between Ginger and Silvia? In the violence of her city neighborhood? By taking too many chances with a dangerous horse? How will all these characters negotiate the difficulties in their lives? None of my either/or questions can be answered that easily, and no question about the story can be dismissed with a simple yes or no.

For whatever answers you can find to whatever questions this book asks you -- and for pure enjoyment -- read the book!

This is a relentless post, isn’t it? Will it never end? Soon, but before it does I want to say a few words about Chaucer. Our reading circle met to discuss Canterbury Tales, and along the way we celebrated, for three different members of the circle, a retirement, a recovery from surgery, and a published short story. Cake and bubbly!

Not everyone in the group read all the tales. I finished the last page of the book only an hour before our meeting and did not have time to finish my notes. I had to make the notes because it was so confusing (to me) trying to keep the names of the tales and their stories straight. “The Miller’s Tale,” for instance, is told by the miller, but the main character in it is a carpenter. In another tale, the Reeve, who used to be a carpenter, gets back at the miller by turning the tables and telling about a cheating miller who gets his comeuppance. That’s in “The Reeve’s Tale.” The first story in the collection is “The Knight’s Tale,” but many other tales also involves knights. Some of the tales are quite bawdy, others bawdy and scatalogical, others very serious and even downright boring.

Had Chaucer completed the story cycle he proposed, there would have been four tales from each character (two on the way to Canterbury and two on the return trip), and the Host would have chosen the one he deemed best, treating the teller to dinner. Since we never get all the tales, we don’t know which the Host would have chosen (although some he would not have chosen are obvious, when he interrupts to say the story-teller is boring the audience), so we can only choose our own favorites. The Knight and the Wife of Bath are two of the best known, but my two favorites are “The Nun’s Priest’s Tale” and “The Franklin’s Tale.” The former is a beast tale, reminiscent of Aesop, with the moral that one should beware flatterers. In the latter, a knight and his lady love marry, agreeing that neither wants to dominate the other, and they overcome obstacles to end up still together, still happy. In neither of these tales is anyone murdered or cuckolded.

Yes, I like happy endings. Don’t need them every time, but once in a while they ring true -- and are a great relief.

I like happy endings too. And when an animal is a main aspect of a story I'm always worried that it will die. Don't tell me. I will read Mare and hope for the best.

When I convinced my stepdaughter to read Q ROAD, by Bonnie Jo Campbell, she kept telling me she was afraid to go on with the novel. I didn't want to give anything away -- will NOT do spoilers! -- told her that what she most feared was not going to happen. Same with THE MARE.

I too like, if not happy endings, at least not tragic last words. I do realize that life is not always like that, but life can be painful, and I would rather read to get a positive look at life. Silly I know, but it's what I feel.

You are all pushing me to think further. I guess, in general, I want some kind of meaningful closure, a sense that the last page of the book followed "inevitably" from everything that came before. Sometimes that means a happy ending, and other times the end is tragic or at least mixed with sadness. The more realistic the story, the more I look for nuance at story's end. THE MARE gave me that.