How Much (Snow, Winter) Is Enough?


It’s no secret that northern Michigan has had a surprisingly small amount of snowfall this winter, and that, like everything else in life, is a double-edged sword. For farmers, winter sports enthusiasts, businesses that depend on snow, and for much of nature, too little snow means bad sledding. For other animals and other human endeavors, life is easier with bare ground. But easy or hard, we get what we get, and we have to make do with it. 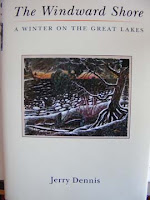 There’s a certain irony at work here Up North when it comes to winter books this year. We went into the fall with a new book from Jerry Dennis, The Windward Shore: A Winter on the Great Lakes, memoir essays that had us all smiling in anticipation of cold and snow, looking forward to it for a change, despite the certainty of heat bills and icy roads. Then—where was winter? Have we had it? Are we having it? 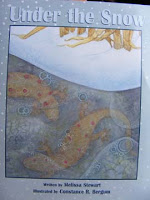 Winter would be the perfect time to read a new adult novel that’s been getting a lot of press this season, The Snow Child, by Eowyn Ivey, and perfect as well for a new children’s book, Under the Snow, by Melissa Stewart and illustrated by Constance R. Bergum, a delightful look into some of the winter worlds of nature hidden from our surface view.

Fortunately, as readers we are readily “carried away” by books, with or without pictures, and if there is not enough snow outside the doors of our houses there can still be blizzards in our imaginations. That is the magic of reading!

Still, I was fighting disappointment on the outdoor front until  I discovered Tracking and the Art of Seeing, by nature photographer Paul Rezendes. The book is now available in a revised edition, pictured here; all quotes are from my older copy.

The countryside where I live, you see, is occupied by all manner of wildlife. Their tracks in the snow have set me puzzling and wondering for years, but field guides on tracks and scat didn’t seem to take me very far; also, like field guides to rocks and minerals, those little books on tracks, irresistible and indispensable as they are, always left me wanting more. Then I found Rezendes.

You will also know yourself better. That is another kind of survival knowledge. The more intimate we become with other lives, the more aware we are of how those lives connect with and affect our own. There may be only a few obvious connections at first—two animals in the same woods, hearing the same sounds, smelling the same smells—but as we track the animal farther, we find that its trail is our own trail. As it moves, it affects its surroundings. What changes the animal changes its environment, and thus changes us. There is no separation; its fate is our fate. We are tracking ourselves....

So, lots of snow, lots of tracks, but--no or little snow.... Sigh! --But wait! There is much more to the “art of seeing” than merely following tracks, and that in itself is a whole course of study.

We don’t need tracks to track an animal. For much of the year, the forest is far richer in sign than it is in tracks. Sometimes there are no tracks at all, but there is never a square yard in the forest that does not tell us something about the wildlife within it. The forest is speaking to us all the time.... Ultimately, tracking an animal makes us sensitive to it—a bond is formed, an intimacy develops. We begin to realize that what is happening to the animals and to the planet is actually happening to us. We are all one....

Piles of scat or droppings. Sawdust at the base of a tree. Scratched bark, broken branches, nibbled bids and twigs. A track is the imprint of an animal’s foot on the ground, a trail the line of tracks left behind. Sign is everything else—everything that tells that an animal was here, what animal it was, what it was doing. “For much of the year, the forest is far richer in sign than it is in tracks.” I take heart in that sentence. I think of the squirrel tracks at the edge of Claudia’s woods and remember the broken acorns littered in the same area. During a thaw, the signs of the squirrels’ feeding will still be there. 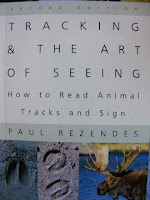 Learning to read the signs, Rezendes believes, is still, in the 21st century, a matter of life and death. It is the difference between knowing ourselves in nature and falsely assuming that we can live apart from it. As one of my customers (who is also a friend, as is so often the case) agreed after he'd had Tracking and the Art of Seeing at home for a while after purchasing it at Dog Ears, this is a book for the Up North Lifetime Library. --What else would go in that library? There's a fruitful topic for another day.

As for tracking, once again, it is all about being present and paying attention, which to me is also giving thanks for life and the world. 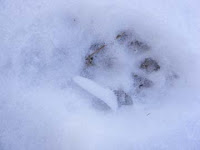 Since this post has been up, I've looked at more tracks, talked to more people, and have received e-mails with guesses and suggestions. Amy-Lynn Bell from Nova Scotia thought the track and trail above looked like that of a fox, and today two friends whose yards are frequently visited by foxes concurred. At left is a photograph from this (Saturday) morning, and below is the shot that clinched it as far as my friends Deborah Ebbers and Susan Cordes were concerned. Fox feet are cat-sized, but no domestic cat or skunk has legs long enough to leave this kind of trail, they agreed. Along with lessons in tracking, I am receiving lessons in humility--from life, not from my friends, who are very kind when instructing me. 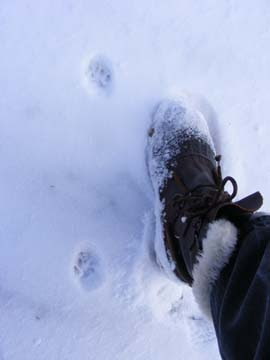 Tracking is a good way to enjoy winter days. It is a meditation in itself. I attended Tom Brown Jr.'s outdoor survival school several years ago and we learned basic tracking skills. (OK, I would flunk a test now.) Yesterday, followed deer tracks back in the woods and sat on a stump. In "more snow" winters that would have been impossible to do without snowshoes.

Kathy, we talked about your having gone to Tom Brown Jr.'s school when you visited Northport. Now that's an experience I do ENVY! :)

It's the Dogman of course.

If you're right, then I'm definitely wrong, dmarks. Of course, we could both be wrong.

Let's see, which would surprise me more--dogman or wolverine?

It's the Cowboy pretending to be a coyote.

Okay, you guys. No one is taking this seriously, so I am not going to say what I think might have made the tracks, and so there!

A tentative guess...probably a member of the canine family ?

The tracks are not Sarah's. Her feet are much bigger (and there are plenty of her tracks around for comparison), so they are probably not coyote tracks, either. One of the ways to tell dog from coyote is that dog trails are "sloppier," while coyote tracks "direct register." As far as I can tell, this means dogs step in their own tracks and coyotes don't.

I would have thought these trails were of a cat--many feral cats in the neighborhood, fed by a neighbor--except that claw marks show in the track.

Hi Pamela,
It bugs me that I still can't seem to leave comments on your blog. Not sure why this is. I don't have that problem with other blogspot blogs.

I'm wondering if those tracks in the snow might be those of a fox. The toe pads seem elongated like a fox's.

Hope all is well with you in Northern Michigan. We haven't had much of a typical winter here in Nova Scotia either.

Thanks for making the extra effort, Amy-Lynn. Since you know the outdoor world so well, I need to go back to my book and see why I thought it wasn't a fox....