Visiting the Past Yet Again 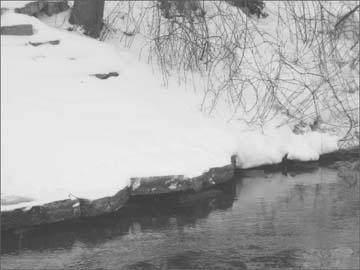 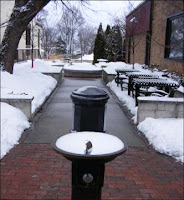 David had an appointment in Traverse City, so we drove in early and went downtown. I wanted to pick up some tickets at the Opera House for a couple of the National Writers Series events. We parked back behind Front Street along the Boardman River and reminisced about the old Ray’s Coffee House days as we strolled this charming passage to Front Street. I recalled even earlier days, back when Thompson News Agency occupied the space that has been Kilwin’s Chocolates ever since. We walked down the block to the building that used to be called the “Arcade” and visited my friend Gloria in her bookstore, So Many Books, So Little Time. I want to add, “So true!” The next time I visit that shop, I won’t have to rush off somewhere else so soon, and Gloria and I will have more time to catch up on each other’s lives. I’ll have time to look at more books, too. 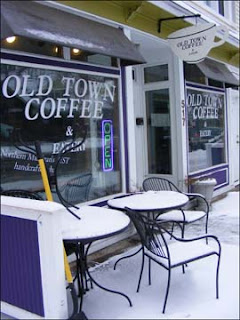 Earlier David and I had ventured south of downtown for coffee. Does anyone recognize this building on Union Street? To pose a more unlikely question, does anyone remember when it housed Dog Ears Books? That was back in 1994-1996. I met a lot of wonderful people there and loved the Old Town neighborhood, but after commuting for a couple of years I was happy to move my bookstore back to Leelanau County. (There’s no place like home!) Coffee at Old Town Coffee was really good. We’ll go back there again, too, on a more leisurely day, and we;ll have a bagel or muffin with our coffee. 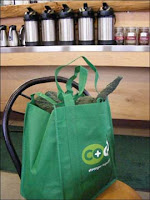 Appointment successfully concluded, we made a trip to Oryana Food Co-op. I hadn’t planned that stop and didn’t have a bag with me, but today the co-op was giving away a free bag with each purchase! That worked out well!

But what did I buy at Gloria’s store? Because you might guess I would find something, rushed as I was, and you would be right. America Today, published by the Macmillan Company in 1938, was a school textbook written by Roy F. Nichols, William C. Bagley, and Charles A. Beard. The name Beard got my attention, but what really caught my eye—and the reason I bought the book—were the illustrations by George M. Richards. Yes, I bought it for the pictures! 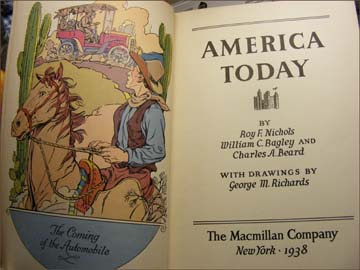 It turns out, however, that the text is interesting, too—interesting to me for reasons most likely not intended by the authors. The book, you see, is a history of our country following the Civil War. The first chapter is entitled “Greater Wealth and Bigger Business,” the first section is headed “The New America,” and here is the first paragraph of that first section:

The United States has changed continuously since it was founded. Every few years has seen such great alterations that people have been constantly talking about a New America. The greatest changes, however, really occurred after the War Between the States and were so important that we can speak with accuracy of the nation thereafter as a New America.

One notices instantly the name given to the conflict: not the Civil War, but the War Between the States. Having read that paragraph, I must read on. The second paragraph in the section dispenses quickly with a description of the country before the war, a nation characterized by smallness—small farms, small towns, small businesses and small railroads. Then the third paragraph:

In politics as in business local activity was the most important [before the war]. There were national elections and voters were interested in the government at Washington, but that was far away. They knew more about state government and local interests. They talked of states’ rights and the interests of the South and in many communities they thought more of local rights than they did of national development. In fact the North and South had quarreled over this question when the South thought that the North was trying to injure her prosperity and power. The War Between the States was the result.

And so we brush off our hands and move on quickly to the new industrialism. Well, I am fascinated and amazed. The word slavery never appears! Nor does the word slave. There is no mention of the “peculiar institution” whatsoever. A passing reference to “cheaper labor” in the cotton fields of the South is brought in so as not to leave that region out of the story of industrialization, but nothing more is said of those laborers. In fairness, nothing is said of the laborers in the New England mill towns, either. The authors have other fish to fry. 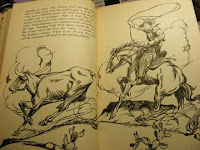 They are eager to Go West! That’s where the (Big) New America really lies—in the Westward Expansion, in the stories of railroads, cowboys, miners... 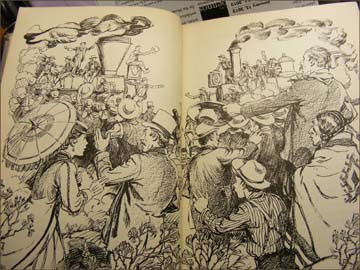 ...and Indians. The reticent curtain drawn over slavery is not brought into play in the saga of the West. Chapter II, Section III is frankly titled “Conquering the Indians.” Here the authors admit that the white man was naturally viewed as an enemy by the Indians:

He took their land, he killed their buffaloes, he wanted to force them to live on small ranges of poor land....

To make matters worse, the government bungled. The affairs of the Indians were looked after by government agents, who were all too often interested in getting rich. These agents cheated the red men. They sometimes let the Indians have liquor [authors do not say that agents ever sold liquor to the Indians] although this was strictly forbidden by the government, and sometimes they let them have guns and ammunition which later were used against United States soldiers. This ill-treatment gained the Indians many friends in the East who felt that the Indian wars were caused by persecution....

It will be interesting to read on to see how the writers of this textbook narrate the rest of the story, which they could only give through the Great Depression and the New Deal, the Second World War not yet having arrived, but here in the opening chapters I am struck by two features: the description of the Civil War as the War Between the States, completely omitting any mention of slavery; and the very different treatment given to the warfare carried out against the Indians in the West. I suspect that the textbook authors were wary of offending white school boards in the South but had no reason to feel concern for the feelings either of black Americans or Indians. The story of slavery could not be told without embarrassment to white Southerners, while the story of “Conquering the Indians” carried no such political danger, but neither former slaves nor Indians on reservations play a part in the story of America Today as it marches forward.

The book does not present a completely sugarcoated history of the United States. It acknowledges resentment of immigrants, the ugliness of poverty and tastelessness of the newly rich, political corruption, and the indifference of the major political parties to the very real problems caused by widespread financial collapse in 1893.

Strange as it may seem, these grave problems were not given the attention they needed by the leading politicians of the day. Neither the President nor Congress did much of importance to help the people who suffered most when depressions came. To these only the minor parties tried to give serious attention. The Republicans and the Democrats fought against each other in the elections, but the questions they agued about had nothing to do with improving the conditions in the country which caused panics and hurt the farmers and laborers.

Interesting? Yes. All too familiar, also. But I keep going back in my mind to the nineteen-century wars, the one between the states and the prolonged war against the Native Americans. Anyone knowing nothing of American history could read this book and have no idea that Africans were brought here as slaves. The reader with no knowledge of our country would have no idea that there even were--and are--black Americans. As for Native Americans, the “Indians” of the glamorous Wild West, the reader from another planet could only conclude that they retreated to their reservations and played no more part in national life.

Did children of color have this textbook in their schools? I can’t help wondering.
Posted by P. J. Grath at 7:11 PM

Ooh - ooh - you know I am just dancing around on one foot spluttering with exasperation and frustration. It is my goal to write an entirely different biography of the New America. (Assuming I get the job done, it will probably exasperate readers in its turn, eh?)

Gerry, you’ll think I planned this, but I swear I didn’t. I posted my musings about the textbook last night and only this afternoon received e-mail from a friend, telling of a new law saying that “ethnic studies” can no longer be taught in Arizona public schools:

“...Tucson Unified School District not only cancelled its vibrant ethnic studies classes, but also banished any book that dealt with ‘race or oppression.’

“As a result, students and teachers say dozens of books -- including Shakespeare's The Tempest -- can no longer be taught in class, and some have even been removed from classrooms and locked up in school storage.”

Hard to believe? How about another surprise? This law went into effect a year ago—January 1, 2011. Would anyone like to start a list of American classics dealing with themes of ‘race or oppression’ that would be banned from Arizona schools as a result of this law? It seems to me that part of what is being banned is no less than the history of our nation but here’s how the State Superintendent of Public Education defends the new law:

Opponents of the law call it “xenophobic.” Here’s their side of the story:

Maybe things in public education haven’t changed that much, after all, since 1938. You'd better get to work on your history, Gerry!

"To make matters worse, the government bungled. The affairs of the Indians were looked after by government agents, who were all too often interested in getting rich. These agents cheated the red men."

And this is the origin of the "Sioux Uprising" in Minnesota, in 1862. Not as far west as you might think.

Jewel? Really? I recall occasional performances at Ray's, but it was not a performance venue, in general. You may be right, for all I know, and it would make a good story if someone can dig it up.

There are sad tales of the U.S. government and official treatment of Native Americans in the East, Midwest, and South. The Far West is not unique. I guess it was the choice of focus for the textbook authors because it fit into their larger story of the "winning of the West," the transcontinental railroad, etc., etc.

And aren't you proud of me, dmarks, for remembering Thompson News? When it comes to mind, I still miss it!

Your report on the book you bought, which had been in the store for some time waiting for you, makes me want to read every book in the store. OK, maybe not the Horror section but so many books are unclaimed/unread treasures.

Next time do plan to come for a longer visit; so much to catch up on!

Gloria, I look forward to that longer visit! Maybe I should bring a blindfold so I can sit and catch up without being distracted by books. You see how apt the name of your bookstore is?

Thanks for the mention of Thompson News. I commented on this a few days ago, but the comment did not save. But here it is is again.