Of Prayer and Fishing 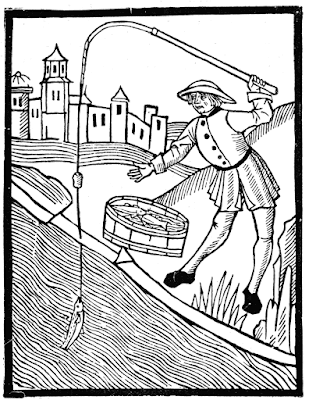 …The anchor of the well-tied fly is the thread, and the anchor of the tranquil mind is the tension in the thread. No matter how scattered my spirit becomes during a day of wayward winds, the tying of flies gathers it together. Tying readies it for prayer.

Such are the satisfying ruminations of a 15th-century gentlewoman, narrator of John Gubbins’s novel Profound River, a character whose lack of dowry helped her decide to enter the Order of St. Benedict in a convent near the town of St. Albans where she eventually rose to the rank of prioress.

The fictional Dame Juliana is all the more fascinating in that her character is based on (although some doubt has been raised) an actual person. Called the “Mother of Fly Fishing,” the historical Juliana Berners, born in 1381, invented and perfected during her lifetime the art of “fysshing wyth an angle,” using that art for years to feed her sisters in the convent. (You see which side I am taking in the historical controversy!) Her written work on the subject, moreover, her Treatyse on Fysshing Wyth an Angle, interposed in the treatise on heraldry in The Boke of St. Albans, published by Wynken de Worde (who had apprenticed as printer to the iconic William Caxton of London), was the first printed book in the English language on fishing, and the entire book was probably her work.

The town of St. Albans in the 15th century, as the author has his narrator describe it, depended largely on what we in northern Michigan today would call tourism, although in that earlier time and distant place the tourists were pilgrims. Having come often long distances to view and pay their respects to the bones of St. Albans, Britain’s first martyr to Christianity, once in the area they had perforce to be lodged and fed — and they were also plied with plenty of drink and religious memorabilia for sale. Pilgrims and sheep, we are told, were the backbone of the economy of St. Albans, and Gubbins brings a welcome liveliness to complicated details of religious, secular, and royal claims to property and independence.

But it is the passages on fishing and on Dame Juliana’s personal history and reflections that rightly take center stage -- lengthy and enthralling riverside scenes as the prioress makes endless minute observations on hatches and weather, effects of light on water, and the habits of insects and fish. The language is specific, and we are transported far beyond the page to the out-of-doors of centuries ago, a world so changed in some ways and yet changeless in others. Dame Juliana has seen many changes in her own lifetime, in the natural as well as in the political world, and so the author has her musing generally on faith and earth’s abundance -- “Our sense that we belong in the world is more ancient than our faith”— and reflecting on the world’s “extravagant generosity,” all of it taken as gifts from God.

Our ancestors counted on the annual runs of thousands upon thousands of salmon, wilderness forests forever rustling with coursing deer and boar, soaring flocks of geese and ducks blotting out the sun, gushing pure springs of water, and so many other signs of God’s interest in us. …Such signs bolstered our ancestors’ faith in the divine….

Dame Juliana speculates on how the diminishment of such plenty, which has evidently already begun in her lifetime, may affect a human sense of being at home in the world. She sees religious liturgies built up in compensation for that earlier sense of belonging and importance.

When these signs [of God’s interest in us] dim and disappear, when air and water threaten us, when wilderness forests are leveled to a bleak horizon, then our sense of security will disappear altogether. And we shall overtax our faith to salve our profound loneliness.

Some might find the character’s musings on a diminishment of nature as evidence of “presentism,” a sin historians commit when they inject sensibilities and ideas from their own time into events long past. In a lesser writer, the accusation would find a readier target, but such are the obvious intelligence and independence of the narrator Gubbins has created that we readily accept her taking a longer view of history than would most of her contemporaries. There is the matter of the audience for this book, also, which Gubbins no doubt considered. Published in the United States in 2012, and in Utah, part of what once seemed, to some, America’s “limitless” West but now a region where the limits of natural resources are only too obvious and subject to competing interests, the novel's passages on diminishing plenty are entirely appropriate.

Descriptions and stories about hunting and fishing have always lent themselves to metaphor. When Juliana tells us, “Difficult fish are the angler’s best master,” because the angler’s mind tends to see patterns and seek predictability, whereas “each river, each pool in that river, and each and every fish” offer individuality, we can be fairly certain that the lessons she takes from the old trout under the bridge will serve her well in resisting the abbey’s greedy desire to rob the convent of its independence.

Serendipity put this novel in my path. I can account for it no other way. And as I read, fly-fishing friends past and present come to my mind, along with gardeners and hikers, artists, pilgrims, those who practice meditation in one way or another, devout religious friends, and, finally, anyone who appreciate not only history but also beautiful writing. And joy.

My day courses with feeling. I would never banish a one, and as a follower of Holy Benedict, I am not asked to banish any….

The hours with their psalms order my affections. Countless small joys – the breath of the morning breeze carrying the fragrance of roses, the moist smell of a riverbank, soft drops of rain on my face, our voices changing as one the hour’s psalms, the smiles on my sisters’ lips, a well-turned stitch, a countryside shrouded in fog, a heartfelt prayer – all become a river of feeling, transforming by the hour my deepest affections.

Nature not to be mistrusted or felt as alien, but to be loved as a river of gifts. As Wendell Berry has written, it all begins with affection.

In this morning’s wee dark hours I came to the last page of the novel, Profound River. Going on to pursue the author’s fascinating essay, “Who Was Dame Juliana Berners?” at the end of the book, I found myself falling back asleep and reawakening several times, as happens so often in my early dark reading; during my waking spells, however, I was closely focused on the essay (which, by the way, won a national award from no less than the British Studies affiliate of the American Historical Association), happy to have such a strong argument for the historical reality of the author’s strong character. So that was all good.

A glossary precedes the historical essay, and following it is a single page of suggested readings. – And then comes the final “About the Author” page, where I learn to my delight that “John Gubbins lives with his wife, Carol, alongside the Escanaba River in the Upper Peninsula of Michigan”! (I guess if I'd read the Acknowledgements at the beginning of the book I would have known this from the start.) He lives in Michigan! Surely we have friends and acquaintances in common! Suddenly I am overcome, thinking of so many dear friends, living and dead, but all of them alive and lively in my heart and mind.

Then, too, there are more books by John Gubbins, including one very recent, and that is always any writer’s best gift to readers.

What a sweet surprise at the end to find the author is from our state! Maybe someday, when times are different, you can do an author visit with him. Or at least get his most recent book signed in your store next summer.

Dawn, you'll think I'm very silly, but when I saw he lives in Michigan I got tears in my eyes!

Pamela, I am LOVING this book! The fishing theme had Godfrey gobbling it up in a couple of days. I'm a glacial reader, so it'll take me longer. All the more time to enjoy the medieval theme and the musical notation of the sung liturgy. The notation is not much like what we know today, but if I follow my instincts and sing out loud, it's very much like the Gregorian Chant I love to listen to before bed! Thank you!What a find!

Laurie, I KNEW that book had to go to you and Godfrey! To you for the medieval music, to him for the fishing, to you both for the history. Had either of you ever heard of the "Mother of Fly Fishing" before? Will you share the book with your pal, writer Joe Heywood? I hope so!