Everything Is New the First Time Around

“It’s nothing but bullshit!” I yelled and suddenly I had the feeling I always got when I tried to explain the Dharma to people, Alvah, my mother, my relatives, girl friends, everybody, they never listened, they always wanted me to listen to them, they knew, I didn’t know anything, I was just a dumb kid and impractical fool who didn’t understand the serious significance of this very important, very real world.

I can’t believe I’m finally reading Kerouac! Tried On the Road once, not that many years back, feeling that I had been neglecting my autodidactic education in American literature (something nearly unforgivable in a bookseller), but I just couldn’t stay with it. The early pages so completely bored me, and reading it felt like such a waste of time – and I know many people feel the same way about some of the books I not only love but re-read on a regular basis – that I shook my head and resigned myself to having that particular hole in my hit-and-miss bookish background. After all, no one has read everything. And it isn’t as if On the Road is fading into obscurity without my devotion: 3 million copies sold, still selling 60,000 a year, according to publisher Viking. Anyway, I’m doing better with The Dharma Bums (first published in 1958), which reminds me as I read of a few people I knew in the 1960s and beyond.

Jack Kerouac was 36 when he wrote this hymn to youth and freedom (he was dead by age 47), but Ray Smith, the first-person narrator of The Dharma Bums and stand-in for the author, seems to be in his early 20s, at most. It’s mind-bending to go, as I do, from the semifictional Ray Smith to diarist Silas Durand, 25 years old in 1855 – two such different individuals, two such different American eras: Jack bumming around California in the late 1950s, Silas soberly teaching school in the 1850s – but also mind-bending to recall myself in the second and third decade of my life, an era that now seems almost like a movie I saw long ago or a book I read several times when young but not at all in recent years. And what a blessing, I occasionally think, that fame was never mine then -- or now, of course. Fame (or infamy) must be a terrible burden at any age, but to be famous when young seems an almost insurmountable challenge. It’s a miracle that as many well-known young people survive being famous as do. Great wealth and privilege at an early age (any age?) has to be an equally great challenge, all the world being so new and intoxicating and all.

Last evening we were reading quietly while waiting out a “severe” winter storm warning as the snow fell silently, so taking Peasy outdoors before bedtime was a surprise to me as well as to him! Then this morning there was more snow (five inches, one of my neighbors says), and it isn’t over yet. Snow is still falling, and the storm warning is in effect until 8 p.m.

Our little ghost town landscape is quite transformed. The mountaintops are hidden from sight, desert tree branches outlined in white, tracks of rabbits and birds and small rodents as clear as they would be back home in northern Michigan. And Peasy cannot get enough of it! Since we don’t know his age, we don’t know if he has ever seen snow before, but whether he has or not, it’s obvious that he finds it very exciting.

As for me, watching the snow from inside a warm, cozy cabin, I think what a perfect day this is to stay indoors. A perfect day for baking. Perfect for reading. Perfect for answering letters from friends and working on my Silas project. Oh, the warm indoor light! The quiet, contented tasks! 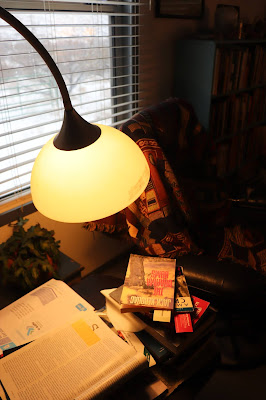 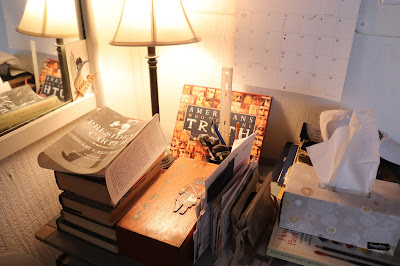 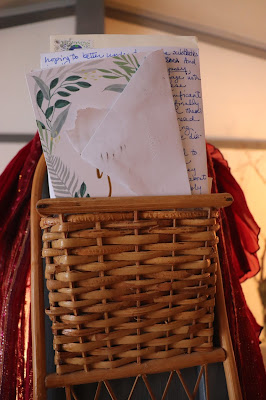 But of course a young dog cannot be expected to lie around indoors all day. He needs exercise. A lot of it. He throws his beloved lion up in the air and carries it from one end of the house to the other, but that just isn't enough. 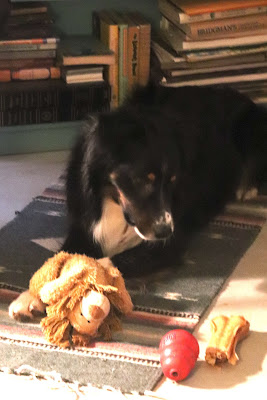 Ha! I say Peasy “needs exercise,” but in his mind I’m sure it’s fun and excitement he craves. “Outside! Outside! Snow! Running! Finding treasures! Poking my nose down under the snow! Zoom, zoom, zoom! Fun, fun, fun!!!” 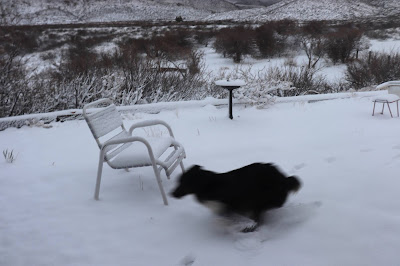 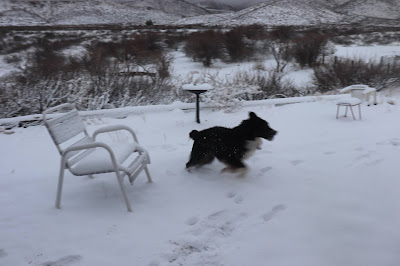 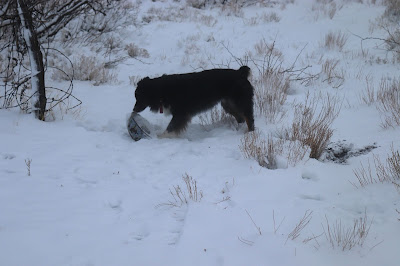 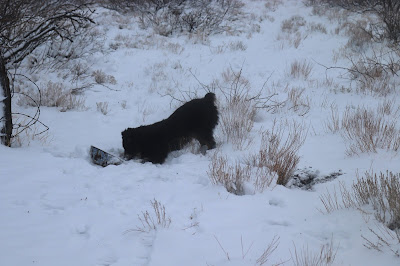 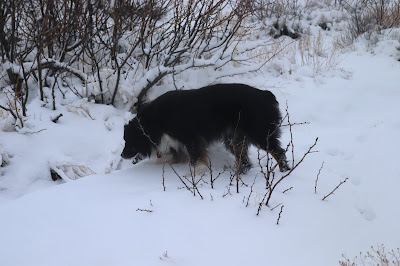 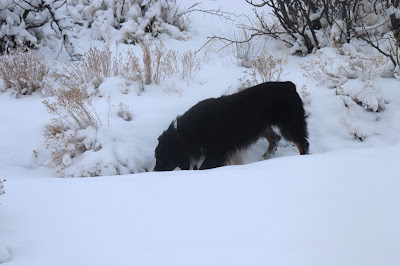 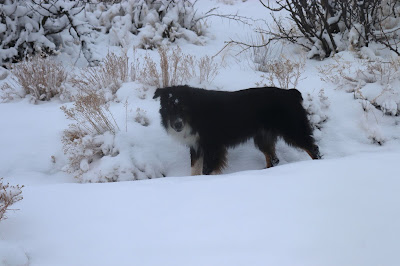 Is his grip on reality more reasonable than mine? Is Peasy a dharma bum in canine form? Or is all dog nature dharma nature? Not at Peasy’s tender age, I’d say. Right now, in what definitely seems like canine adolescence, the excitement of the storm is overcoming Peasy’s tenuous grip on his dogly duties and right conduct. Come when called? Oh, Mom, you are so boring! Right now, today, Mr. P is all about fun and freedom! But I am patient. I can wait him out! And it does lift my heart to see his joy. Dog joy is one of life’s great gifts to human beings.

Loved the narrative and photos. I am right there with Pease, running and jumping. Could not get through On the Road so many times. Liked dharma Bums.

I'm so glad he likes snow, what a perfect way to introduce it to him, not 3 feet of it, just enough to be fun. Though I imagine 5 inches is a LOT out there!! We got less than that here, from 'the big storm' as described by our local weather people. But it's started again, so who knows what we will wake to. Katie liked walking around in it, but wasn't interested in going out back to play today. Maybe tomorrow.

Oh what a wonderful way to start the day........looking at Peasy having such fun in the snow! He's an adorable boy.