Of Rocks and Time and Little Knowledge 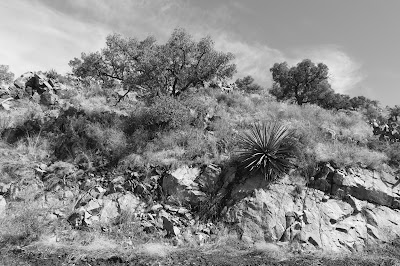 It is hardly an accident that the city of Tucson, Arizona, is home to the largest gem and mineral show in the world. The West in general is a geologist’s dream. Everywhere, earth’s bones confront the eye or lie hidden a mere scratch below the thin, poor soil. But don’t ask me much about such matters, because the little I know of Arizona’s plant and animal life is a wealth of knowledge when set against my geologic ignorance.

There are simple, basic divisions — sedimentary, igneous, metamorphic — and the at-least-theoretical “rock cycle,” hardly as obvious or observable or dependable as the hydrologic cycle but providing an intellectual template for making some sense of stretches of time otherwise boggling to the human mind, eternities in which humans appear a few seconds before midnight on the clock of All Time. So while I read about plates and faults, veins and dikes, when I look up from my books to the mountains themselves I feel as awed by them as Moses must have been when spoken to by the burning bush. Except that the mountains are silent and still. 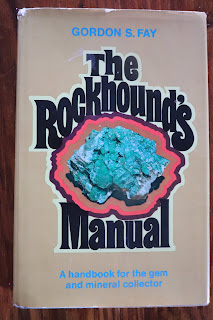 Rockhounds focus on smaller, transportable pieces of the mystery, on miniatures, rocks and stones rather than whole mountains, but even these small, mysterious bits baffle me. Gordon S. Fay suggests the following minimal equipment: magnifying glass, knife, penny (copper), file, small piece of quartz, small piece of unglazed porcelain, and small bottle of hydrochloric acid (The Rockhound’s Manual, 1972). Well, I have the penny! Then there are hammers and chisels, goggles and gloves, picks, rakes, shovels, and screens. Too much! I am never going to become even a rockhound, let alone a geologist.

I do, however, enjoy casual reading about geology and, to a lesser extent, about rocks, and am occasionally driven to reference books on my shelves when a different-looking rock presents itself to me out in “the field,” as it were, i.e., in my case this winter, the dusty high desert and washes outside our cabin door. Quartz is everywhere, and I hear again the words of a young geologist who remarked drily that amateurs pick up “pretty” rocks, while geologists use more demanding criteria. Well, I appreciate the “interesting” as well as the “pretty” but have nothing like the discerning eye of a geologist. 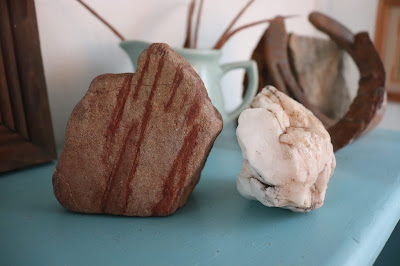 To identify a rock, geologic engineer Fay writes, one must study its “mineral habit” and the form of its crystal (latter most often invisible to the naked eye). The phrase “mineral habit” is charming, is it not? I think right away of plants. A plant may be upright or branching or creeping or dwarf or whatever, and those adjectives describe the particular plant’s habit. Similarly, the habit of a mineral applies to its typical form.

“Mineral habit” is a nice general concept, the kind of thing that should stick in my mind when whatever specifics I briefly encounter have fallen away.

Not aspiring even to amateur standing, though, I come in from my desert walk, newly found tiny rock in hand, and reach first for the National Audubon Society Field Guide to North American Rocks and Minerals because, like Audubon field guides for birds or wildflowers, this one presents photographed specimens organized by color. Is it possible I have found a bit of turquoise? Wouldn’t that be exciting? Turquoise, the Audubon tells me,

…can be distinguished from variscite only on the basis of blowpipe tests; chrysocolla is softer.

Okay, thanks for that variscite tip, but I won’t be doing any blowpipe tests! How about chrysocolla? A minor ore of copper, it has been found all over Cochise County, I learn, and it was chiefly copper that was mined here in Dos Cabezas back during the town’s short-lived glory days. Fay confirms, “found in copper deposits,” and gives me a test I can try with no equipment whatsoever:

Chrysocolla usually sticks to the tongue, and this is perhaps its best known distinguishing characteristic. 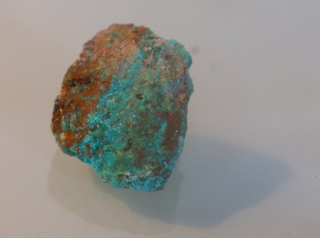 How sticky counts as sticky? All I can do is try another rock and compare the two.... Okay, yes, I’d say that, compared to something else, this small blue rock does seem to stick to the tongue. And I like that kind of test -- so much less destructive to a sample than dropping chemicals on it or hitting it with a hammer to watch it shatter and fly apart.

When attempting to identify a tree or bird or wildflower, something common to the area is much more likely than a rare bird. I would have liked my little find to have been turquoise, but here in the copper-bearing mountains of Cochise County, I’m going to bet that a blue rock that sticks to my tongue, however lightly, is chrysocolla. And since I’ve never even heard of such a rock before today, it’s been a memorable occasion for learning, just as common, weedy little corydalis, blooming now in the wash, was an exciting for me five years ago. I’m satisfied. Once again, my books have helped.

Online searches reveal other ideas. Here, for instance, I learn that chrysocolla is a "supportive goddess energy stone" that will aid me in finding the "right words to speak to aid emotional healing in others." Who would have imagined so much power in such a tiny stone picked up at random in the dusty desert? 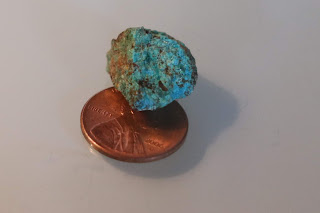