Nothing Is What It Used To Be

Up to the days of Indiana’s early statehood, probably as late as 1825, there stood, in what is now the beautiful little city of Vincennes on the Wabash, the decaying remnant of an old and curiously gnarled cherry tree, known as the Rousillon tree, le cerisier de Monsieur Roussillon, as the French inhabitants called it, which as long as it lived bore fruit remarkable for richness of flavor and peculiar dark ruby depth of color. The exact spot where this noble old seedling from la belle France flourished, declined, and died cannot be certainly pointed out; for in the rapid and happy growth of Vincennes many land-marks once notable, among them le cerisier de Monsieur Roussillon, have been destroyed and the spots where they stood, once familiar to every eye in old Vincennes, are now lost in the pleasant confusion of the new town.  - Maurice Thompson, Alice of Old Vincennes


Thompson dedicated his historical novel to Dr. Placide Valcour, who inspired the book by providing the author with an “ancient and, alas! fragmentary epistle” from the year 1788, the mildewed remains of a letter written by none other than Gaspard Roussillon. The paragraph quoted above is the opening of the first chapter of the novel, a chapter called “Under the Cherry Tree,” and it struck me as appropriate not only to my theme today but also to the place from which it originates — Northport, Michigan, in the heart of northern Great Lakes cherry country.

(J. Maurice Thompson, who died in 1901, is a well-known Indiana author. His best-known classic, The Witchery of Archery, is available again in reprint, but first editions from 1878 still command well over four hundred dollars.)

Recently a Northport local and born-and-bred native said to me sadly, “This isn’t the town I grew up in.” I can understand and sympathize, because even in the scant quarter-century that I’ve known Northport it has seen a lot of changes (I am grateful for some and sigh over others), but when I look past the confines of this little Michigan village I can’t find a single place that has not changed in the lifetimes of its residents. The South Dakota town where I was born, the northern Illinois town where I grew up — both are nearly unrecognizable when modern scenes are compared to old black-and-white family snapshots. What would I find if I searched out the dusty old Ohio road (probably paved now) where my grandparents raised fruit and vegetables and kept chickens for eggs to sell, where my grandmother milked a cow, and where the simple house had no indoor plumbing into the 1950s? That neighborhood today would not be the place where my mother grew up, I’m sure, just as, when I visit my mother these days in northern Illinois, my own sensibilities continue to be jarred by housing developments across the road where my girlhood self watched thunderstorms and sunsets over fields of corn and soybeans. Even the grade school my sisters and I attended (new when I entered third grade) has already been torn down to make room for yet more houses. Houses, houses everywhere! No more vacant lots where we kids could dig "forts" and climb wild trees.

Nothing is what it used to be. Anywhere.

The other side of the coin is demonstrated by towns that have vanished (or nearly so) rather than changing. Virginia Johnson, my August 2 TEA guest at Dog Ears Books, describes in her memoir, Ira’s Farm, a northern Michigan village called Harlan that no longer exists. Isadore in Leelanau County can still be found at the crossroads of Schomberg and Gatske Roads, and the Catholic church still stands, but all the “bustle” of the earlier Polish community moved down to Cedar a long time ago.

Nothing stays the same.

Another fascinating book I’m reading right now is The Storks’ Nest [Life and Love in the Russian Countryside], by Laura Lynne Williams. Working with the World Wildlife Fund, the author moved to Moscow in 1993, where she met Igor Shpilenok and moved to work with him — eventually to live with and ultimately marry him and raise a family — in the Bryansk Forest Nature Reserve. Williams describes their remote village, its population having declined from over 300 to a mere nineteen inhabitants:

…The villagers here have never had it easy. There were so many strikes against them: floods, famine, purges, collectivization, war, resettlement, and the absence of a road. Now the only people left in Chukrai are those who weren’t smart or lucky enough to leave. And then there are Igor and me, two naturalists who find solace in the village’s remoteness, in its total immersion in the wilderness of the Bryansk Forest, and in each other. 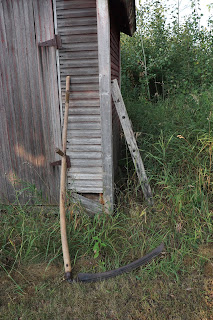 Williams tells her love story but does not romanticize the villagers’ lives. Alcoholism and poverty for some or, for others, endless, back-breaking physical work and poverty are their lot in life.

When the grasses grow long and the sun shines, the villagers make hay. All day they swing their scythes, making nearly full arcs around their bodies. The grass falls in neat rows, and soon the open fields around the village are laid flat. The villagers stop only to sip kvas and eat salo and bread. The women wear white scarves tied tightly around their heads to divert the heat. One cow needs approximately three tons of hay to last the winter. One fit person could make this much hay in approximately twelve days. Hay is usually cut twice: first in July and again in August. About three days after the hay is down, if there is no rain, the villagers help each other stack the dry grasses and compress them into dense piles. The men toss the hay up on the stacks with their pitchforks, and the women trample it with their feet.

The villagers cut hay all day, day after day, until the work is done, but Laura finds herself exhausted after a few hours, and this, mind you, is in the 1990s, not the 1890s. When one old woman in the village dies, by the time her body is discovered it has been ravaged (I won’t go into details) by rats and by her own cat. Her burial — there is no funeral service, but two other village women prepare her body and dress her for her coffin — turns out to be more an occasion for drinking and eating, especially drinking, than any memorial to the departed. Life has changed many times over in Chukrai. In the course of living residents' memories, people were executed or sent to prison or fled invaders, and houses slumped back into the earth. Has only hard work remained the same?

These days in Northport cherries are harvested with mechanical shakers rather than being picked by hand (but workers still get out on foot to prune the trees). No one grows large fields of potatoes or asparagus commercially here any more, as far as I know, and sure it is that school no longer closes in the fall for what used to be called “potato vacation” (i.e., so the kids could work the potato harvest). Housing prices have soared, making home purchase difficult for young families. Yes, much has changed, not only the new marina buildings, new sidewalks and streetlights on Nagonaba Street, new golf course, and new recycling station-in-progress north of town. Old tree giants that used to stand in front of what is now the Tribune and on both sides of the former Totem Shop (now Porcupine) are, like le cerisier de Monsieur Roussillon in Vincennes, Indiana, long gone.


But just as the waters of the Wabash River still flow through Indiana, Northport still looks out on Grand Traverse Bay. Mountains, lakes, and rivers — they keep us oriented in place, through changes over time.

There have been days this summer when I’ve wished I could “freeze” Northport right where it is now. We’ve left behind the sad doldrums of a decade ago but aren’t insanely crazy-busy and crowded like Glen Arbor. Right now is not "the good old days" to some, not the "brighter future others" envision, but it seems good to me. I guess I just have to keep murmuring my mantra, reminding myself over and over, I’m here now, I’m here now. 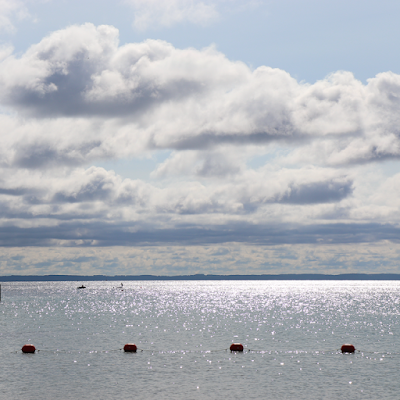