The Dawns, the Cities, the Lives: Written Words and Visual Images

Latent in me, I suppose, there was always the belief that writing was greater than other things, or at least would prove to be greater in the end. Call it a delusion if you like, but within me was an insistence that whatever we did, the things that were said, the dawns, the cities, the lives, all of it had to be drawn together, made into pages, or it was in danger of not existing, of never having been. There comes a time when you realize that everything is a dream, and only those things preserved in writing have any possibility of being real.

These lines clearly spoke to me, because I copied them down almost the moment I read them, quickly shared them on Facebook, and sent them in an enthusiastic e-mail to a friend. But is this my belief, that writing is "realer than other things"?

This friend and I correspond in the form of written letters and are almost compulsive about not e-mailing each other, except on rare occasions, and as briefly as possible, to arrange a meeting or send each other photographs or quick, pithy notes. For us, writing, on paper, is very important. Escribir nos importe. But she also is a visual artist, a painter, as is my husband, and would I want to say their work, their painting, is less than writing? That feels all wrong.

And so, in a letter to my friend (which I hope she will forgive my raiding for pieces to use here), I began to think through the question -- thinking, as I so often do, by exploring my thoughts in writing to see where they would lead.

I asked my friend (in writing, in a letter she will not yet have received) if she felt with her drawing and painting what Salter felt about writing, that her art preserves what otherwise would, in the end, lack reality, that her paintings of (for instance) Scotland draw together for her what otherwise would be in danger of not existing. In posing the question on paper, I realized that I feel that way with even the most pathetic of sketches I make on paper with pen or pencil, such as the one at the top of this page of the beach at Cancun. I also feel it to a lesser degree with photography. But I feel it most of all with writing. I am not claiming that writing is objectively "best" at drawing together and preserving reality -- only that it is the first toolkit I reach for.

"Most of all," I wrote above, using those words to emphasize that I feel I am preserving the world of my own experience (though not some objective, God's-eye world), when I write about it. Next question: Why, for me, this "most of all"?

The contrast with photography is striking, as I see it. Look at any snapshot or photograph, and how often can you tell who was holding the camera? Occasionally it's clear from the location, the time period, the subject, and the chosen framing that the photographer was, say, Eugene Atget, but in most photographs, even the best (and all the more so for amateur results such as my own), whoever clicked the shutter is absent from the image. In a family snapshot, a missing family member is obviously the photographer, but the image below of dawn over the city of Mérida could have been made by anyone. 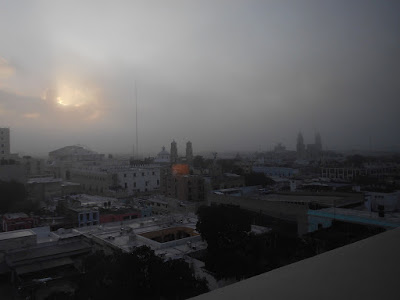 When I compose a written "picture," on the other hand, I put myself into it. The place I write about, when I write about a place, isn't just the place by itself but a place I inhabited for some period of time, however brief. Like Kilroy, "I was here."

Where does that leave drawing and painting? I will not be so bold as to speak for painting or for painters. The Artist with whom I share a life paints from memory and imagination, not to preserve details of a particular scene, and there are as many styles and subjects of painting as there are painters. What I will say is that -- again, for me -- I find sketching intermediate between photography and writing and feel it closer to writing, for me, than it is to my photography.

(For a couple years, I took drawing classes and tried to spend part of every day quietly looking and drawing my world. More recently I have hardly touched a sketch pad, so what you saw at the top of this post is very much what I would call a sketch rather than what I would call a drawing, but the distinction does not matter for my purposes in today's musings.)

In writing and thinking about this subject, then, I discovered my feeling about sketching/drawing, that I feel it closer to writing than to photography is to writing, but then I had to ask again, Why? Is it because a hand guiding a pen or pencil cannot help being more personal than the instantaneous click of a camera shutter? Because the lines on the paper cannot be other than a personal, individual expression? Maybe in part, but that can't be the whole story. Or -- and this feels right to me -- is it because of the time spent making those marks on paper that I feel I have preserved a bit of the world? That feels closer to my intuition.

Living is always a journey through time. When I write about anything in my life -- or even, as today, writing about a developing train of thought -- the writing takes time, and anyone reading it must also take time. When I write about dogs in the Yucatan, during the time I spend writing I re-live my time there, and when you read, you are journeying through time with me.

"I should tell you that there were stray dogs all over the Yucatan, and they all look pretty much alike, differing only in color — about 20-25 pounds, short-haired, with skinny tails and sticking-up or -out ears. Some were black, some tan, some bicolor, but it was almost as if we saw the same dog everywhere in a different costume. Mutts, like my dear old Nikki. Leonore couldn’t help worrying about them: were they sick? did they have worms? did they get enough to eat? As for me, I really, really liked the fact that they were tolerated everywhere and could go about their lives unmolested (I never saw a dog on a leash), as if they were people. They are very traffic-savvy, naturally, as they have to be to survive and never seemed to beg from tables, even when people dining outdoors had very good food."

My photographs of one of those same dogs tells no story at all and serves only (and not very well at that, since this was not a city dog) to illustrate my words. 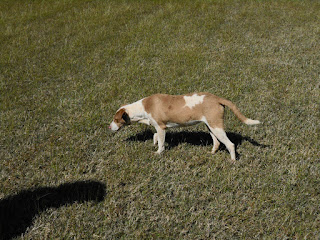 Because we had so few days and a very full schedule, there was no time for me to sketch any of the dogs I saw in Mexico, but that would have meant more to me than a camera image, because when I look at an old drawing that took me a long time to produce I feel again the whole being-there of that time. I do not appear in the drawing, any more than I appear in any of my own drawings or sketches, but I can feel myself there in a way I don't with a photograph. A drawing for me is a diary entry without words. Those below were made around my Michigan home and down in Florida years ago. 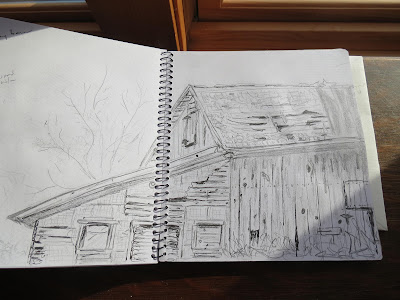 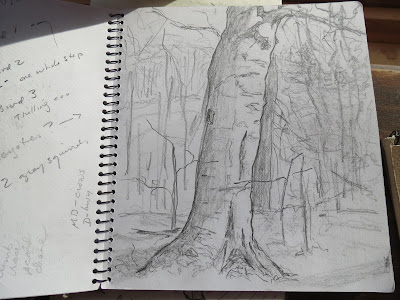 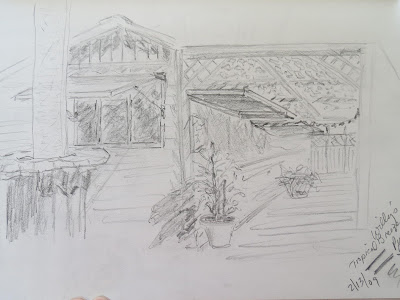 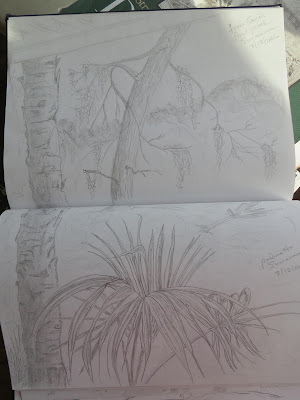 Be that as it may, though, for better or for worse, words have always been and will no doubt remain my first toolbox.

It was at this point in my musings that I was joined over morning coffee by the Artist, who asked what I was working on. I gave him a quick synopsis of the thoughts expressed above. Surprisingly, perhaps, he gave the written word highest priority.

"A photograph becomes another object in the world," he began. "It shows objects but is also itself an object. A written description, on the other hand, has no representative existence except in the mind of the writer and readers."

"Yes, a drawing is also an object and exists as an object. What is written exists only in imagination."

Well, that was interesting! We would have continued our conversation, except that Sarah, the dog, had gotten tired of waiting for her morning sortie, and I had to get dressed to get her outdoors.

Walking can be an aid to thinking, however, and so my thoughts continued, and I realized that my seeing a drawing as preserving and recreating time rested on the assumption of a first-person experience -- me, looking at one of my own drawings -- whereas another person looking at one of my drawings might as well be looking at one of my photographs. The time I spent drawing, the time that comes back to me when I look at an old drawing, is not present for another viewer. A written description -- or any kind of writing, for that matter -- is different not only because it can only be "seen" in a reader's imagination but also because the reader must take time to read the words that compose the piece. David's point about imagination is important, then, but so is my emphasis on time.

How about you? Did you follow my thoughts along this meandering path? Did you stop and argue with me or bring in examples of your own, either to confirm or refute any points made along the way? Were you walking in my shoes, or were we walking side by side, in dialogue?

Words. I cannot stop generating them. Will my written work be fiction this winter? (Michigan dreaming from the far Southwest?) Or drawing dear, scruffy Cochise County with words? The dawns, ... the lives....

However the winter experience develops, along with studying Mexican history and the Spanish language and doing a good winter's worth of writing, as well, I want to use some of my Arizona time wordlessly, too, being-there in unhurried fashion with paper and pencil.