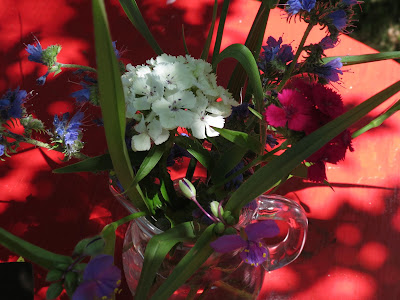 Last Sunday was what will have been my last Sunday away from the bookstore for the next two months. I used to begin my 7-day-a-week schedule with Memorial Day weekend, but June Sundays in Northport are quiet, (this was true even last year, when the post-Memorial Day dropoff in visitors did not occur, for the first time in my memory), and I decided I needed the time at home. Grass will not be growing as fast in July and August.

Okay, decision taken. But on my last Sunday at home I didn’t stay home all day. 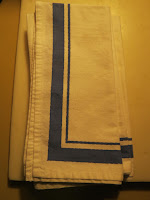 We had to attend the annual St. Wenceslaus rummage sale, for one thing, and I found several things I really needed – pint canning jars, wooden clothespins (one never has too many), and a nice, big laundry basket. I also bought five or six books, for us and for the shop. Then there were the indulgences – two (yes, two) cheese graters (sturdier than the ones I had at home), an irresistible set of four table napkins, and some other small item that escapes my mind at the moment. (Oh, a steamer basket.) 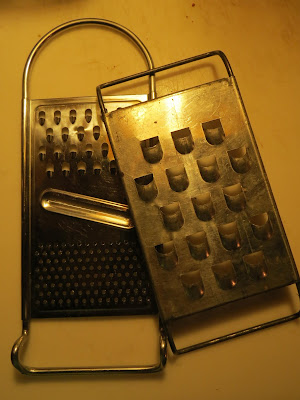 After the sale, we continued to Lake Leelanau for coffee and so I could pick up a bag of sugar at NJ’s. But then, home ... for lunch outdoors ... and to hang laundry on the line. I’d made a commitment, though, to attend the artist-in-residence lecture at 1:30 in Leland, so down the highway I went. Indoors. On a beautiful, sunny June Sunday. And I was glad to be there.

Holly Wren Spaulding is the first nonvisual artist to be awarded the artist-in-residency at Leland’s Old Art School since the program’s inception. My husband was the first artist-in-residence a decade ago, and most of those selected have been painters. But Holly Wren Spaulding is a poet. Words are her medium. Spaulding’s exhibit at the Old Art Building is a group of poems, the whole entitled “Lost Lexicon.”

Her inspiration for these poems was learning that roughly fifty words were to be cut from the Oxford Junior Dictionary, largely words having to do with nature and the outdoors, to make room for words children hear more frequently, many having to do with new technologies. It is in this context that Spaulding sees her work as a poet to be one of conservation. 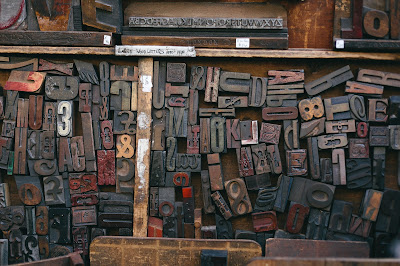 The poet knew she wanted these poems done on letterpress, and initially she thought to hire someone to do the printing. 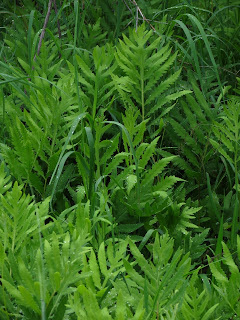 The letterpress artist (‘operator’ as a noun felt all wrong there!) contacted, however, offered instead to teach the poet her craft. And so Holly composed lines of type – actual, physical letters of poured lead – and impressed her words on sheets of handmade paper. The paper used is no longer available, the company that made it out of business. There was a display with a few lines of type and a little sign saying, “Please touch.” I did -- and felt suddenly near tears. Am I overly attached to words? To the physical world? Perhaps both, but I wouldn’t have it any other way.

Holly’s chosen words were names of plants and animals. On the walls where paintings are usually shown, small poems on sheets of handmade paper were presented to visitors. It was all (as an acquaintance said years ago when she became the mother of twins) very physical – natural objects, physical artifacts, material art. 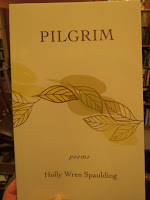 The “Lost Lexicon” poem cycle may be available in future as a book. For now we still have Pilgrim, Spaulding’s 2014 work published by Alice Green & Co., and in that small, sweet book you will find the same poetic sensibility and feel the same gratitude at being able to hold the poet’s work in your hands, the book a physical object.
Posted by P. J. Grath at 10:46 AM

Thanks for coming out to the lecture, Pamela. And thanks for hosting a reading in your shop when PILGRIM appeared. I've been busy since the, and in May another book appeared, IF AUGUST. I don't know what will become of the Lost Lexicon. I would like to show it a gallery in western Massachusetts, and perhaps elsewhere too, before it becomes a book, in part because my experience is that this work reaches more people in the visual form.

I understand about the visual aspect. Loved seeing the poems in that very tactile form (though we all, I hope, refrained from touching!) and having them spaced, mounted separately, on the wall. So glad I didn't miss that event!