Book Review: THE LAKE AND THE LOST GIRL 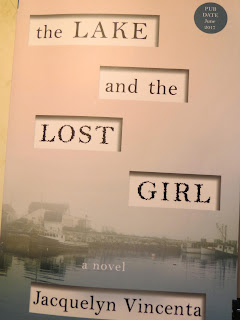 The west boundary of the lower peninsula of Michigan is the east shore of Lake Michigan (I mention this for Australian readers), and it is in west Michigan, along the shore, that Jacquelyn Vincenta has set her novel, The Lake and the Lost Girl. Freshwater and the scent of pines mingle, and moody sunsets provide a scenic backdrop. We know where we are.

The story toggles back and forth between the 1930s and 1999, as a husband and wife in the present (1999) search for the truth about a local poet who disappeared in 1939. She has been presumed dead, but did she die, or did she live on, elsewhere, and add to her literary legacy? This is the question that drives the plot.

With that question always in mind, we as readers wonder how much parallelism exists between the marriages, sixty years apart, of poet Mary Stone Walker and her husband Bernard Evans and that of Lydia and Frank Carroll. Both women are writers, both men have anger issues. These are surface similarities, perhaps misleading. But is the present any clearer than the past when it comes to understanding the secrets of the heart? As one character says and another much later agrees, “Marriage is complicated.” Any married person can attest to that, I'm sure!

For years, while Frank Carroll has pursued teaching and academic research on his beloved vanished poet, Lydia Carroll has been the family’s main support, as the writer of popular romance novels. After twenty years of this arrangement, disagreements over finances are only part of a building tension in the household, and their young teenage son is caught between his parents’ increasing unhappiness.

Is Frank’s research meaningful, or has it become an expensive, dead-end obsession? Should Lydia act on her growing dissatisfaction with the writing of genre novels and try something new, or is she deluding herself about her abilities? In the famous words of the midcentury woman’s magazine, “Can this marriage be saved?” Can son Nicholas perhaps be the one to save it? And is it possible for any research to reconstruct the lives and marriage and personalities of Mary and Bernard, after all these years?

Changes from one time period to the other are clearly indicated, as are changes in point of view from one character to another. There are, however, rough spots that more rigorous editing would have smoothed out.

For instance, someone without the terminal degree who teaches part-time in a community college is an instructor, not a professor. While it is plausible that students would fail to make the distinction, colleagues and other adults certainly would note the difference.

In general, the cast of characters could have been pared down. One character introduced early on, Lincoln Babcock, for example, seems marked for an important role but never reappears after his initial scene. Similarly, Lydia’s bookseller friend, proprietor of Charlotte’s Book Web in downtown White Hill, is introduced in the novel’s early pages and brings forward important clues not recognized until later, but Charlotte herself never reappears, nor does her bookstore. Instead, when a book surfaces as the key to the central mystery, it comes by way of Jacob’s Tavern and Books, owned by Brad Kramer, a business and character introduced for the first time very late in the novel. It is disconcerting to have characters we thought important disappear, while others whom we haven’t met at all come suddenly out of nowhere.

Those criticisms aside, I found Jacquelyn Vincenta’s novel compelling and her characters intriguing and believable. Her main characters are complex, because their searches and confusions are so, but we enter into their points of view eagerly, searching along with them for answers to questions that multiply like wire coat hangers in a forgotten closet. Truth and lies ... deception and self-deception, faith and belief ... love, hate, and the passion both inspire ... the struggle to create art and meaning in one’s life – these important themes are skillfully woven into a story whose precise end will surprise even readers who put some of the pieces together along the way.

Don’t take this book to the beach! You’ll forget to re-apply sunblock and come home with a bad burn. Better to begin it in a shaded hammock and finish on the porch of your summer cottage.

The Lake and the Lost Girl
By Jacquelyn Vincenta
Sourcebooks Landmark
Paper, 352pp, $15.99
To be released June 2017

Love from Deb and Tom Whitney