Out in the Country, But Far From Dead 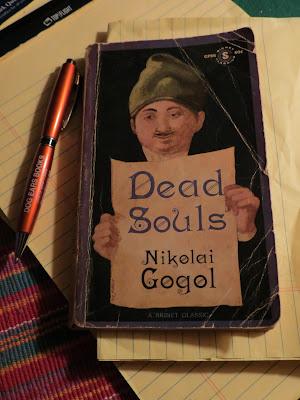 The lines of the Scottish poem came into my head as I waited for my screen to come to life.

Breathes there a man with soul so dead

Who never to himself has said

This is my own, my native land!

Okay, that was a digression. Couldn't resist. Back on track now.

I don’t generally underline in books. But when it's an old 60-cent paperback, and someone else has already underlined a lot in it and spilled coffee on the cover, and when the pages are literally falling out, for Pete’s sake – then I feel completely free to underline to my heart’s content. 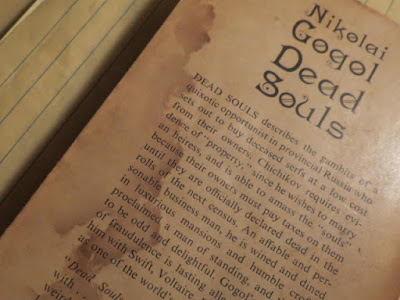 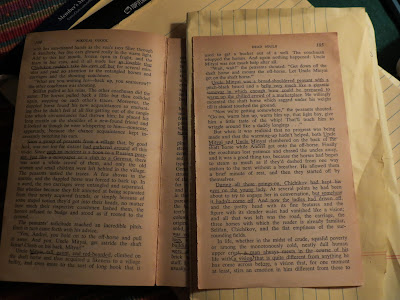 Our reading circle’s latest self-assignment was Gogol’s Dead Souls, a book I’ve read more than once before but always enjoy re-reading, because just as you can't step into the same river twice, a book is always a new experience each time you enter its world.

This time around I was very conscious of the ways Gogol refuses to keep to any recognized literary formula. Not only is Chichikov an anti-hero, but the author himself keeps intruding into the narrative to remind us of his characters’ failings (not just Chichikov, all the characters) and to plead for our sympathy. He mourns, in particular, the negative reception his protagonist is sure to find among critics and general public and how that will all bounce back on him, the author. Oh, poor me! An author such as I, “who dares to bring all that he sees into the open,” is much to be pitied!

All those things that an indifferent eye fails to notice—all the slimy marsh of petty occurrences into which we sink, all the multitude of splintered everyday characters who swarm along the drab, often painful road of life—he shows them clearly in relief, thanks to the power of his merciless chisel, so that the whole world may view them. This author will not receive world-wide acclaim, nor will he see tears of gratitude or feel the unanimous enthusiasm of hearts he has stirred; no sixteen-year-old girl will throw herself at him, giddy with admiration for her hero; it is not for such as he to become drunk at the sweet sound of his own words; and, of course, he cannot avoid trial by his contemporaries, a hypocritical, unfeeling court, which will pronounce the characters he has created with such care insignificant and vile, will assign him a dishonorable place among authors who have insulted mankind, will ascribe to him the traits of his own characters, and will rob him of his heart and soul and of the divine flame of talent. This is so because his contemporaries will not recognize that microscopes ... are just as wonderful as telescopes....

“I’m showing the world as it is, people as they are, and of course I’ll pay the price for my honesty!” the author complains bitterly. Do you feel sorry for him, or are you laughing?

I laughed. Somehow in the context of the novel -- and though passages like these leave the story to one side for as long as they last, and so are not really “in the context of the novel” – somehow even these passages come through time as comedy, as if Gogol, dressed as a clown, pushes Chichikov off-stage for a few minutes, takes center stage himself, and cries the tears of a clown for a laughing audience before going over to drag Chichikov back into the spotlight.

George Lucas, of “Star Wars” fame, says he quite consciously followed the structure of Joseph Campbell’s myth of the hero's journey: Departure, initiation, return. With Gogol, on the contrary, we meet the anti-hero Chichikov already well launched into his journey. He is no longer young. His quest is absurd. Only after ten chapters of misadventures does the author give us Chichikov’s background, the story of his childhood, youth, adult trials, and the inspiration for his journey. “Departure” is the final chapter of the book! And the journey is not over, either, when the book has been closed. Gogol intended Dead Souls as the first book in a trilogy. He completed one of the sequels but burned it before he died.

It’s difficult to see what Chichikov would have done for two more volumes and what kind of conclusion the author could have found for his tale. No matter, I say. I find this novel ever so much funnier and more believable and satisfying than Gogol’s famous short stories.

There is another story formula that Dead Souls does not fit. -- In fact, as many formulae as there are, it’s a safe bet that Dead Souls fits none of them, but the one I have in mind was laid out by Lee Child, author of the Jack Reacher mystery novels, in a talk he gave in Traverse City at the National Writers Series. Here’s the formula: There is a town with a problem it cannot solve. A stranger arrives. He solves the problem and is rewarded. Think of the riddle of the Sphinx, which no one could answer until Oedipus appeared on the scene.

Well, Chichikov comes to town as a stranger, but the village where he lands had no obvious problem before his arrival. It's a place where nothing much seems to happen at all, which is why everyone is so delighted to welcome a stranger. But then Chichikov's bizarre, incomprehensible business deals get everyone stirred everyone up and give rise to even more bizarre speculations until all hell breaks loose! And far from laying to rest the fears he has produced, Chichikov is lucky to escape with his own skin!

As he did in his short stories, Gogol again trots out generalizations and stereotypes –

The haven was familiar, just as the inn was – the kind of provincial inn where, for two rubles a day, a traveler can get a quiet room, with cockroaches peeking out of every corner like raisins....

-- but with his own distinctive, remarkable additions, e.g., those cockroaches “like raisins”! Stinginess, he tells us, has “a wolf’s appetite and grows hungrier the ore it devours.” And who can forget the picture of Plewshkin, with his black eyes like darting mice!

In a way, Chichikov and his quest to acquire “dead souls” – that is, to acquire, by purchase or outright gift, deeds showing him as the owner of serfs who have, in fact, died since the last census, relieving the seller of the tax liability and gaining for himself, he hopes, collateral that will qualify him for a generous government loan – serve as a scaffolding on which Gogol builds the portrait of a pre-Revolutionary rural Russian village. Looked at it this way, the village is the main character of the novel.

I don’t know. I need to think further about this. Actually, I’ll run it by the others in the reading circle and see what they think. But be honest now -- weren't you relieved to find a literary topic rather than a political topic here today?

Almost everything in chapter 3 seemed funny to me. He hit my funny bone quite often throughout. His digressions were a little bit long for me sometimes. Probably should reread it. May be a form of escapism.

Yes I was. I have closed down that part of my brain that ponders politics. I know I can't continue this way for 4 years but right now I need to hybranate.