I Fall Down a Rabbit Hole 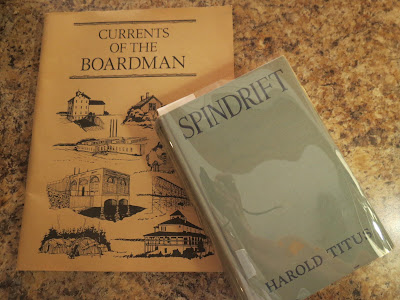 My title is a phrase used by friend, fellow blogger, and intrepid historical researcher Gerry Sell, over in Antrim County. It’s what Gerry says about the way she’ll start out looking for a certain piece of information and much later find she has pursued a long series of connecting facts that led far from her original question. Curiouser and curiouser, we book people and our unplanned quests! It isn’t distraction. It’s serendipity.

And so it was with me on a quiet afternoon in my bookshop when most vacationers were out enjoying sun, wind, and water. The hunt began innocently enough in the familiar and leisurely task of rearranging books on shelves, and then I couldn’t help sitting down with one large format, staple-bound item, Currents of the Boardman, since it was compiled by the Boardman River Historical Committee under the chairmanship of Martin Melkild, whom I was privileged to know for several years prior before he died. 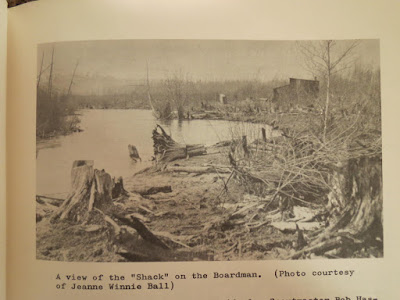 Falling, falling, falling into the past – I am lost in the days of one-room schools and boarding houses, train fares of two-and-a-half cents a mile, an old Swede who kept chickens and bought a bull “yust ta pet.” Then in Chapter VIII, “Those Good Old Fishing Days,” by Gordon Charles, in an account of the Traverse City Fly Club, appears an entry quoted from “The Shack Diary” by shack guests Harold Oswald Titus (1999-1967) and Beth Vladimir Titus. Charles notes that Titus “was one of Michigan’s earliest conservation writers,” and I jump up to pull a couple old novels from my Michigan shelves.

Yes, indeed! There he is! Bruce of the Circle A (1918), a Western, is set in Arizona, but the story of a later novel, Spindrift (1925), takes place in Michigan’s Upper Peninsula, when a young sailing captain finds himself charged with murder. Carl Garrison is innocent but goes to prison, escaping after three years – and that’s about all I can tell today, because I left him, still on the run, to write this post. Oh, one other thing – at the end of Chapter VI of Spindrift, the protagonist in flight has taken responsibility for an injured dog. Lynne Rae Perkins, in her latest book, Frank and Lucky Get Schooled, observes that “every picture can be better with a dog in it,” and what’s true for pictures is certainly true for stories....

I suppose it isn’t surprising that Harold Titus would write the Western, as well as books set in Michigan. After all, he was of the same generation as James B. Hendryx (1880-1963), another Michigan novelist and outdoorsman, who wrote Westerns as well as what I call “Northerns.” Westerns were to that time in American popular literature what spy novels are today. But to my mind, there's nothing like an Up North story.

The village of Fairport strings along the shore of the Garden Peninsula just before that land reaches its extremity in Point Detour, on one side of which rolls Lake Michigan and on the other Green Bay. There are perhaps a score of houses under the balsams, scattered along half a mile of shore line, and in front of the cedars which fringe the beach itself rest the weather-beaten net houses and docks of the fishing rigs.

Under those cedars on fair summer evenings the village gathers....

EVERYTHING is better with a dog in it...

Funny, too, because another book I'm reading at home and read a bit in this morning just added a dog to the story halfway through!