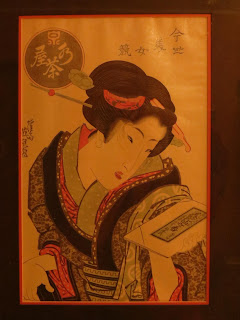 Back in January I reported that I had begun The Tale of Genji, a Japanese work written by (probably) Murasaki Shikibu, a lady of the court during the Heian Period (10th to 11th centuries). It’s a long book, about a thousand pages, and since I didn’t need to finish in time for a group discussion, I did not keep to a rigorous reading schedule. Consequently, here it is past the middle of March, and I’m only now midway through.

“Is it worth the time?” David asked me. 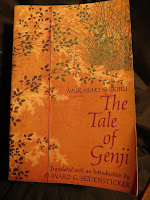 I told him it’s considered a classic of Japanese literature, was written by a woman, and that Asian classics have been a sorely neglected area in my reading life. It’s not terribly difficult book, except for keeping all the names and relationships straight, and the translator, Edward G. Seidensticker (at least I presume it was he, though it could have been an editor) provides a list of principal characters at the front of the book for reference, so I can’t say I’m struggling. More like dawdling.

In the beginning I felt about Genji as one of my friends felt about Don Quixote: it seemed to be just one episode after another and all of them very similar, although Genji’s are amorous adventures (generally successful) rather than knightly exploits (or farcical attempts). But much as Cervantes eventually develops a more complicated story line, so does Murasaki, so by now I’m hooked and read further each evening. 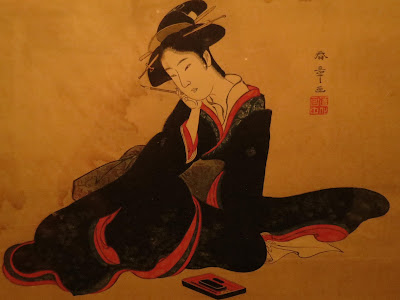 This is a perfect book to fall asleep over. The story is full of gentle sighs, delightful gardens, rain and snow and flowers and trees, and lots and lots of beautiful sleeves. Never in my life have I read more about sleeves! There is poetry on nearly every page, almost always couplets making allusion to earlier Japanese poems. And you would not believe how much of the poetry mentions sleeves! When sleeves are “wet,” as they often are, it is usually an indication that the writer was in tears, although later in the book a footnote said it could also be – sometimes was -- an allusion to a damaged reputation. Oh, dear!

The women -- and girls -- with whom Genji and others fall in love frequently have good reason to dampen their sleeves with tears. Like the marriageable young ladies in Jane Austen’s England, the only guarantee of social security for a female is alliance with a man of suitable rank and fortune.

...Such a difficult, constricted life as a woman was required to live! Moving things, amusing things, she must pretend to be unaffected by them. With whom was she to share the pleasure and beguile the tedium of this fleeting world?

Alliance does not always mean marriage, however, and marriage seldom means monogamy. For one thing, polygamy is common, even expected, among the wealthy titled families. And although divorce exists, at least once in the novel (so far) the divorce did not take place until after the man took a second wife (wedding and all). Also, while Genji is growing older with each chapter, his attentions go to continually younger girls all the time, and his strategies for gaining access to and power over these girl children are such that the author herself cannot resist inserting the occasional sentence of judgment, e.g., “One might have hoped that he would pursue the matter no further....”

Distasteful as the main character’s actions can be to modern Western sensibilities (especially feminist sensibilities), another reason Genji makes such restful bedtime reading is that whatever in the tale might be true happened very, very long ago, so long ago and so far away that there is nothing I can be expected to do about it, and so I let myself enjoy the descriptions of gardens and houses and clothing and the little line drawings on so many of the pages, taken from woodcuts that illustrated a 1650 Japanese edition. 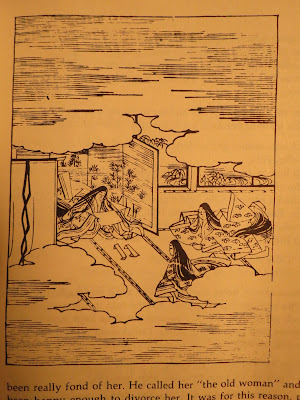 At one point the emperor sends the following message to Genji:

“Cleaner, more stately the progress of the moon
Through regions beyond the river Katsura.”

“It is not true to its name, this Katsura.
There is not moon enough to dispel the mists.”

Other references to Katsura occur from time to time throughout the book, inspiring me to return with renewed interest to another book, a beautiful volume ofeatured in my recent post on slipcases, Katsura: A Princely Retreat, with photographs by Takeshi Nishikawa and text by Akira Naito. 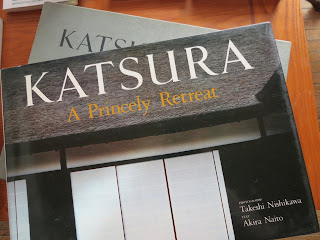 The story of the “princely retreat” begins four or five centuries early than the story of Genji.

The question of when the Katsura Palace was first built devolves upon that of when the village of Katsura came into the possession of Prince Toshihito, and the answer to this is conjectural. ... Prince Toshihito had no connection with the village of Katsura during Hideyoshi’s lifetime. As we shall see, this is a point of some importance, because it refuges one of the misleading legends concerning the origins of Katsura Palace.

Those of us not previously misled -- because not in possession of the legend -- may nevertheless follow Professor Naito’s exposition with fascination. Long-ago emperors, court intrigues, mistresses, adoptions, assassinations and other murders – how dramatic they all seem, especially juxtaposed with the tranquility of the spare rooms and elegant gardens of Katsura! But Japan at the beginning of its modern period, like human history in general, was a complicated story of ongoing rivalries and machinations. So no wonder...

Possibly to escape momentarily from the political manipulations of the shogunate and the court, on July 20, 1616, Prince Toshihito went to Senshõ-ji Village to “view his melons” and later “took a walk,” as the documentary source puts it, along the Katsura River. ... The record of this visit is the earliest suggestion of the country house that was to become the Katsura Palace.

The first building was apparently a small teahouse. Later building would follow, and Naito notes that some kind of construction began on July 17, 1620, possibly focusing more on the garden than the house. There would eventually be five teahouses, four of which remain today.

Despite detailed history and numerous black-and-white photographs and plans of house and gardens, it is the color plates that set this armchair traveler dreaming. Here is the famous Sumiyoshi Pine (said to have been a thousand years old in Genji’s day): 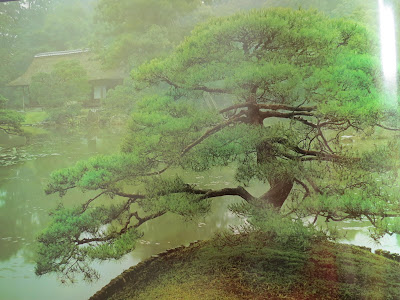 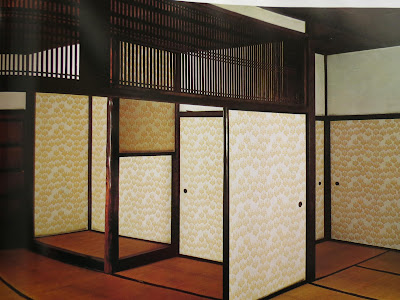 Cabinets in a dressing room: 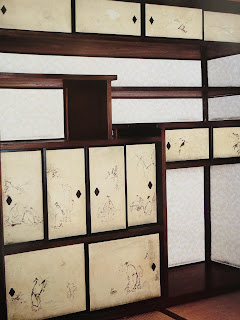 Garden view from one of many verandas: 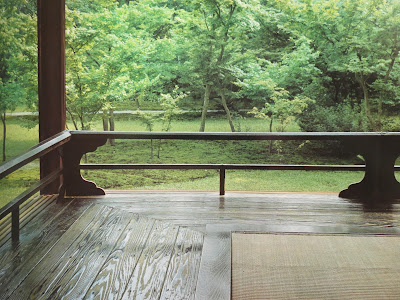 Although The Tale of Genji is set centuries prior to the construction of the Katsura Palace, Katsura: A Princely Retreat gives me some idea of life as it was lived by wealthy, titled leisure classes in Japan’s history, a life that certainly stands in sharp contrast to the primitive conditions experienced by Morie and Kitako in the snow country of Japan in the middle of the 20th century. Both an engineer and a dreamer, Morie (as you may recall) retreated farther into the wilderness the longer he lived. Gengi, on the other hand, with little to occupy his time other than visiting his various “ladies,” made do with exquisite miniature landscapes around his home.

If you were to have been born in Japan, what century would you prefer, and which way of life? As for me, Wednesday’s blizzard served as yet another reminder, in case one was needed, that neither Sarah-dog nor I was born to be a princess. The princely gardens are lovely, but I was born to work -- and to be outdoors as much as possible, too, snow or no snow. A life of unearned leisure is something I experience only in books. 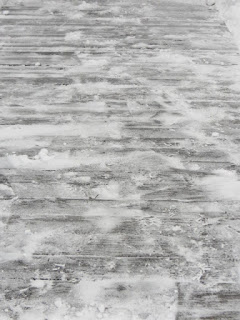 Fascinating time period. Though I would not have wanted to live there then. Hope that was the last blizzard for you.

An April blizzard is always possible, Dawn, but I'd just as soon do without it. As for historical periods, I'm happy to have come along in the U.S. after World War II. No complaints. A sequestered life of leisure, even if royal, would not suit me at all.

Naturally I had to follow some rabbit trails - the whole post reminded me of a Kurosawa film - "Ran" - that made a big impression on me. Books, photographs, films, plays - they all take on new meanings over time, as they are connected to new experiences or exposures.

I assume that if I had lived in the 11th century I would have been either a slave or an outlaw. Strongly prefer Antrim County in 2016 (with forays here and there).

An out, Gerry? There's a story waiting to be told!

But yes, we are no doubt better off where we are, right now.

A wonderful memorial, Pamela. Thanks for showing us a truer Jim Harrison than will probably be captured in any of the other tributes being written. A few years ago I had the audacity to send him a letter asking if he’d read and blurb my novel, citing my age (a few years younger than him) and my connection to Leelanau as the only reasons he might be persuaded to do it. Despite my gross effrontery, he sent me a gracious note begging off on account of his failing eyesight and wishing me the best with my writing. Despite the bluff and bluster, I always thought he must have been a gentle soul and I guess his response to me, and your memorial, confirmed it for me.

This comment of Don's is one he intended for my subsequent post, where it is also published.